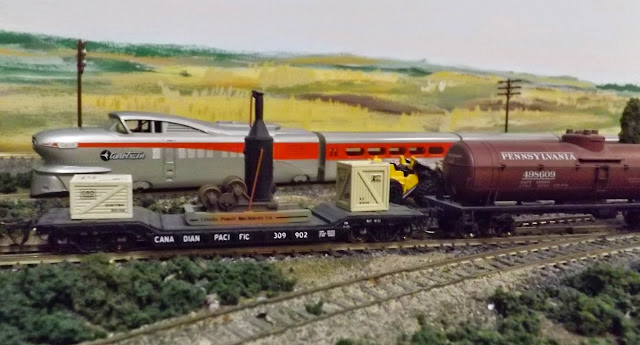 Long time WMRC member Norm Leathers graciously opened his home to club members and shared his passion for everything about the Pennsylvania Railroad at this spring's layout hop. Norm has a wonderful layout which also winds its way through a tunnel to the adjoining rec room. It's always fun to watch the trains go by in the next room!

Norm also got out his model of the Pennsylvania railroad's Aerotrain and ran it around his layout. The Aerotrain was the railroad's gallant but mistaken attempt to get more people to ride the train again in the late 1950's when passenger traffic was waning. The car-like engine resembled a 1958 Oldsmobile, and the passenger cars were made from shells of inner city buses. The lightweight passenger shells were its downfall, as they made for a very uncomfortable ride.

However, it looked very cool, and has been a favorite of Pennsylvania model railroaders and rail fans alike - as long as they didn't have to ride in one! An Aerotrain engine is on display at the National Railroad Museum in Green Bay, Wisconsin. Norm visited the museum and had a picture of himself taken beside the Aerotrain. Now that's a real rail fan! 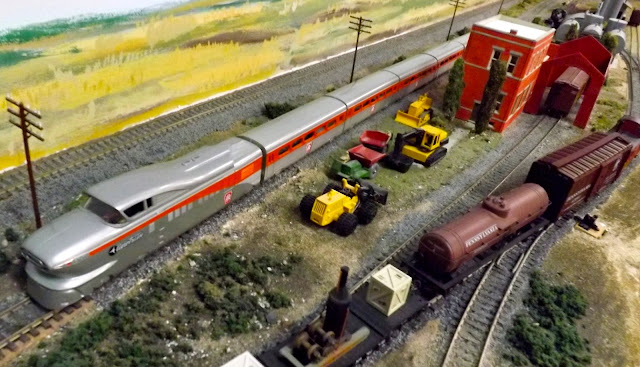 Another shot of the Aerotrain as it zips through the Pennsylvania countryside on Norm's layout. 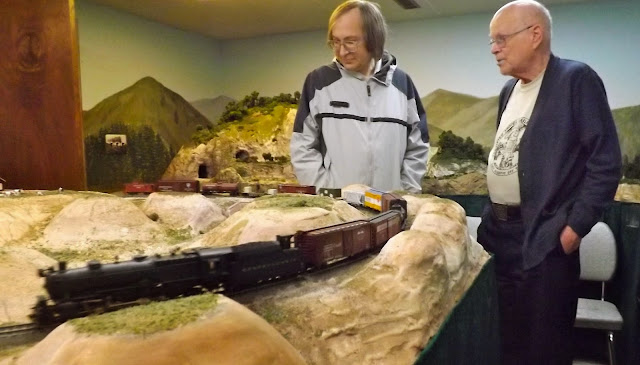 Norm Leathers, standing at the far right,  discusses the construction and design of his layout with Glenn Klassen as a conventional steam engine rounds a sweeping curve.
Posted by Paul Ullrich, WMRC Blog Editor at 11:05 AM