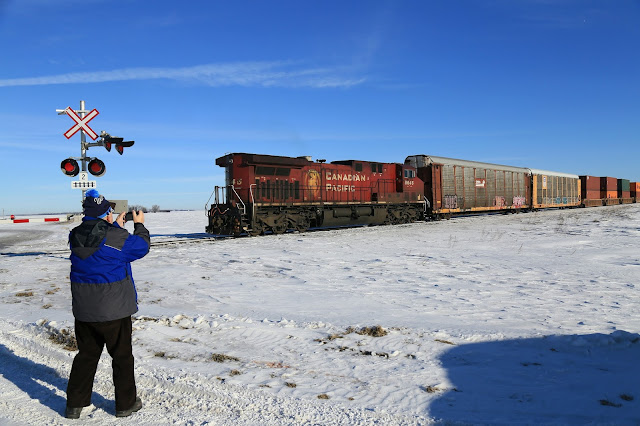 Who says that rail fanning is only a summer pursuit? Not Felix Lesiuk and Louis Lenz! These intrepid long time club members ventured out for the first time in the New Year last week. The weather was quite nice, especially for January, as it was well above zero.

There was a lot of snow around so it limited parking locations. They got as far west as Moffat. They missed a few trains, but CN didn't disappoint them! CN is running quite a few new units lately. They even caught VIA's Canadian heading west! 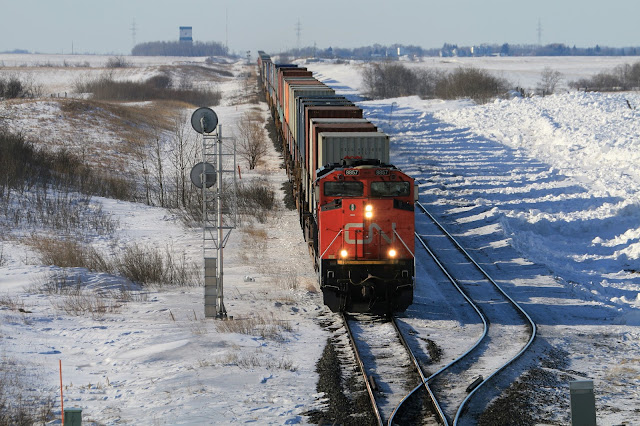 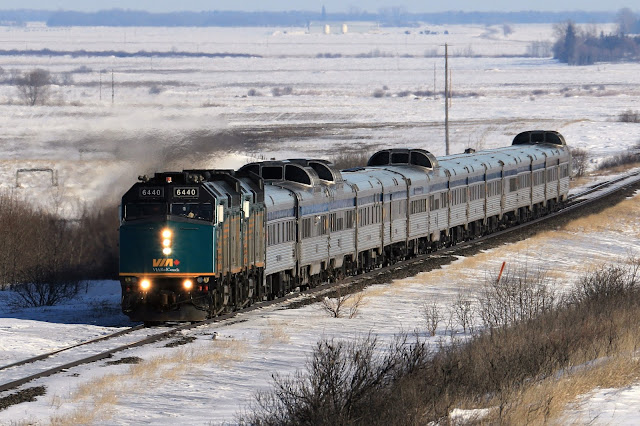 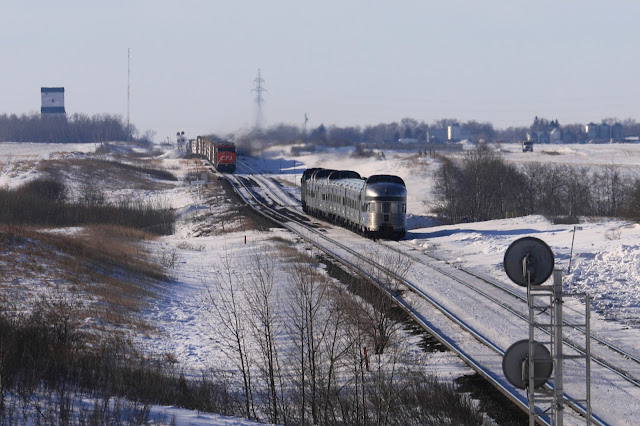 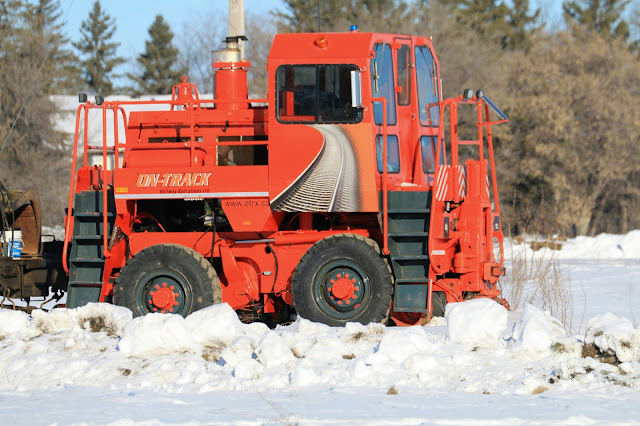 Coming to a T-shirt near you: WMRC blog editor and Social media Executive Paul Ullrich was asked by the club's executive to revamp his original design of the Winnipeg Model Railroad Club's 60th anniversary (which was two years ago) by creating another logo for the club's HO layout, the Gateway Western Railway, and incorporating it into the existing logo.

The revised logo will be printed on T-shirts, which will be available for sale to members and non-members alike.
Posted by Paul Ullrich, WMRC Blog Editor at 8:04 AM No comments: 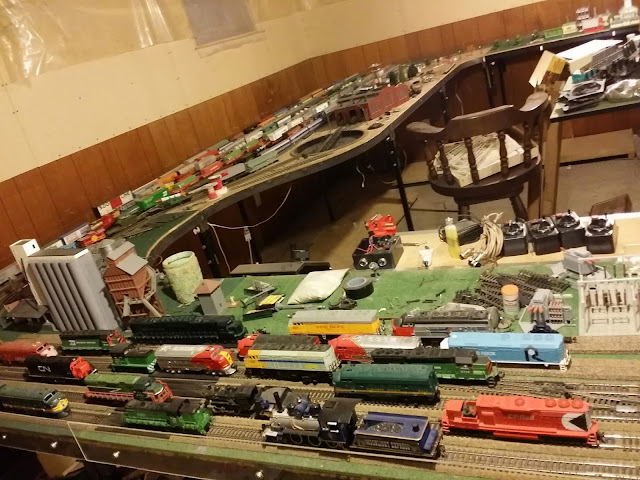 Darcy Braun wants to sell his late father’s HO layout. His father,  Abe "Charlie" Braun, started building his layout in 1971, when he received an HO train set as a Christmas present. As you can see from the images, it has grown! Darcy’s mother doesn't have room for it any longer.

Darcy and his mom would love to sell this to someone who would like to continue working on this project. There are many engines, cars and buildings, trees, street lights and much, much more. There’s hundreds of feet of track, and lots of spare parts.

They’re hoping get to get around $2000 for everything. Considering how much equipment there is, that sounds like quite the deal! 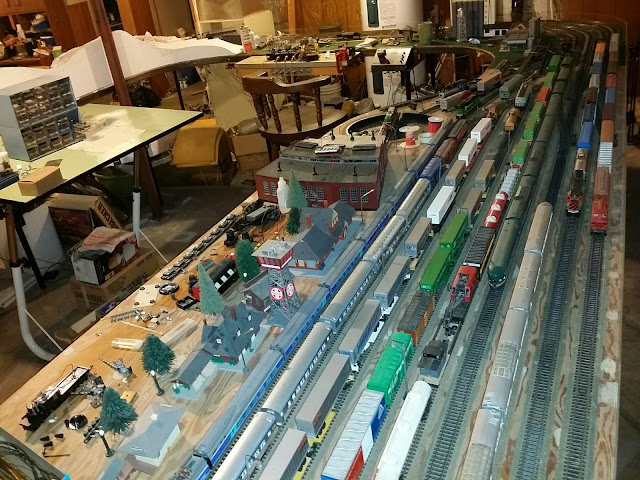 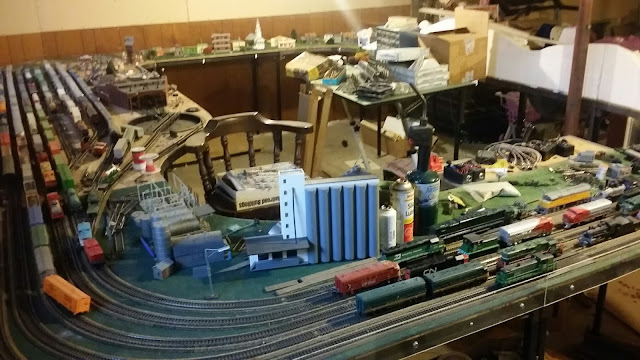 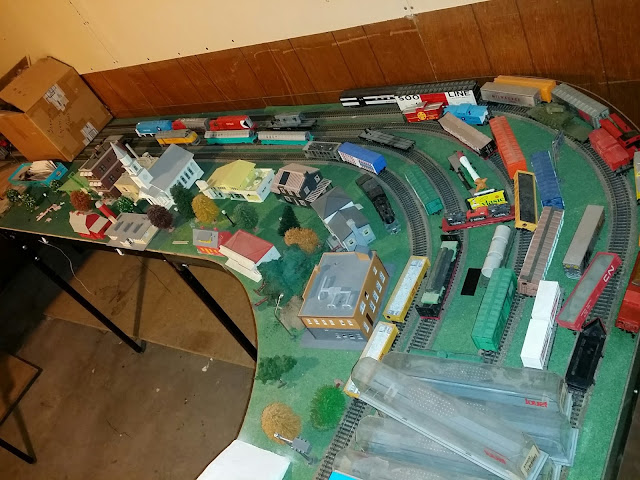 Posted by Paul Ullrich, WMRC Blog Editor at 11:17 AM No comments: 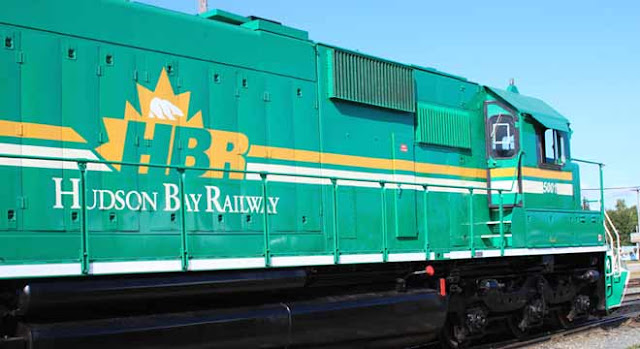 The WMRC's January meeting features past president Larry Leavens, who will give a presentation of the history of the Hudson Bay Railway, organized in 1910, which runs from The Pas to Churchill. He'll also cover the newer and controversial Hudson Bay Railway line, which has been owned and operated by Denver's OmniTRAX for the past 20 years.

The meeting starts at 7:30 PM on Friday, January 13 in the Tank Room at the Charleswood Legion, 6003 Roblin Boulevard. The canteen will be open, and we'll be holding our monthly model display and a 50-50 draw. Hope to see you there!
Posted by Paul Ullrich, WMRC Blog Editor at 6:00 AM No comments:

The International Plastic Modellers Society invites you to their next meeting 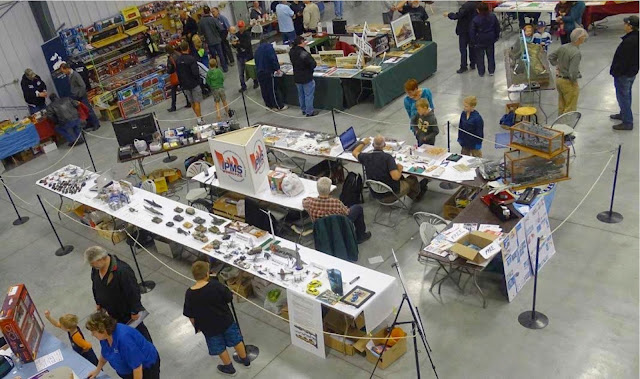 The Valour Road chapter of the International Plastic Modellers Society (IPMS) has extended an invitation to all those who are interested in modelling to be their guest at their next monthly meeting, which will be held on January 11, 2017 at 7:00PM at the St. James Legion, 1755 Portage Avenue, in the multi-purpose room on the second floor.

The club’s theme at this meeting is to learn more about the other model clubs in Winnipeg. An open invitation has been given to all the model clubs and their representatives to join them at this meeting. The program also includes displays of models by their members. This is also their annual general meeting, and elections for the President and Treasurer will take place.

IPMS Winnipeg usually meets at 7:00PM on the first Wednesday of the month (January is the exception). Each meeting is attended by about 30 to 40 members of the 80-strong chapter.

Since 1968, IPMS has been the world’s premier organization dedicated to scale modelling as a hobby, with members across the country and the world.The IPMS has regional chapters from coast to coast. It publishes a quarterly journal, electronic newsletters, and holds annual conventions.

In 2014, the Winnipeg chapter launched a “Support Your Local Hobby Shop” campaign. Representatives from local hobby shops have been invited to speak at their meetings. These visits have provided members with more information about the advantages of supporting a local business.
Posted by Paul Ullrich, WMRC Blog Editor at 1:24 PM No comments:

Have fun at the Kildonan Place with WinNtrak in January 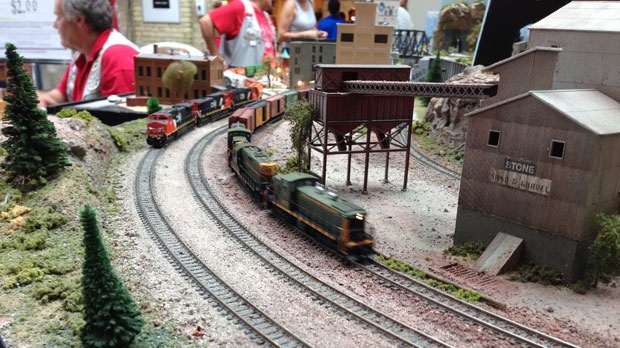 But that's not their only display date this winter! They'll also be displaying from February 17 to 19 at Grant Park Shopping Centre, and again at Kildonan Place from March 17 to 19! If you're headed our for some weekend shopping at any of those dates, then why not visit those malls and get some model railroading action in as well?
Posted by Paul Ullrich, WMRC Blog Editor at 12:53 PM No comments: