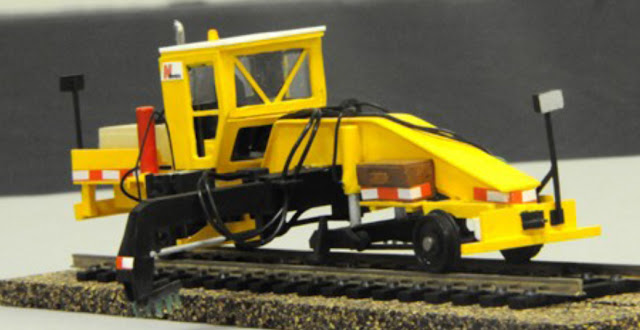 The WMRC’s first monthly model display of the season showcased three scratch built HO gauge MOW models by Aaron Woloshyn. He was awarded a $15 voucher from a local hobby shop.

Aaron came up with the idea of building a CN tie exchanging gang earlier this year. There are many ready made models and kits that are available but he couldn’t find any that worked for his Canadian railroad. So he decided to do what he liked to do and made his own machines. He printed photos of each machine in HO scale using dimensions from the Nordco website.

Once this was done he used the photographs as a reference for both shape and size to build the entire body of each machine out of Styrene. Additional detail parts were used for each machine to add to the complexity. They are all hand painted and the ballast regulator has various decals from his collection. The rest will be getting decals soon,  and they all will get a generous amount of weathering before they are considered finished. All photos by WMRC Lantern Editor Robert Weaver. 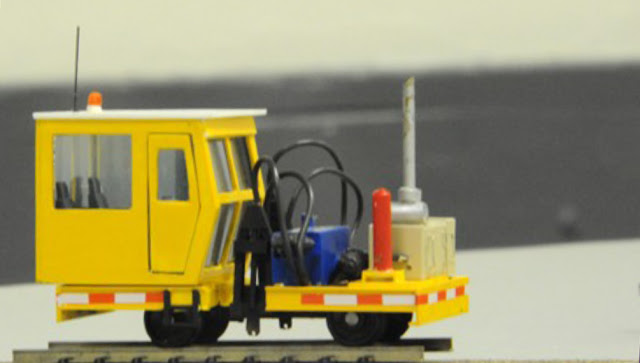 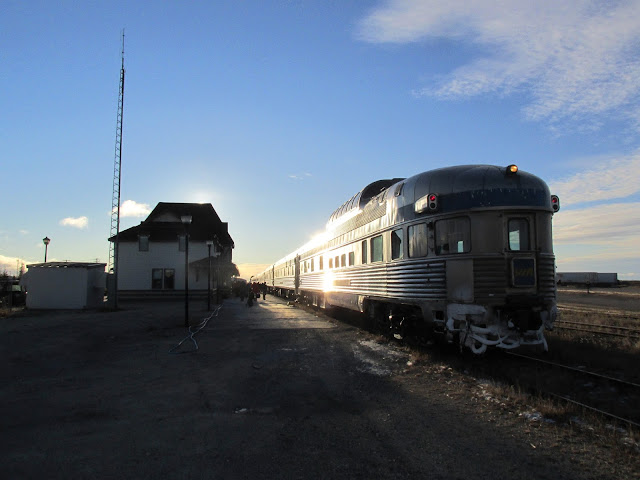 Long time WMRC member Felix Lesiuk (who is also President of WinNtrak and Rail Travel Tours primo tour guide) sent us some wonderful photos and some text on his trip to Churchill with his latest tour group earlier this month. Enjoy!

We made it to Churchill pretty much on time.  Turned on the wye outside of town and backed in to the station. I had a chance to take a couple of quick pix of the dome car in the morning sun at the station, before we all piled into Nature 1st's bus for a quick tour of town and a visit to Cape Merry Gun Battery. It was very cold! Most were bundled up quite well. I braved it and smiled with my frostbitten face (frozen in  a smile). We had a sentry watching us for bears. One of the pictures shows a cool effect where Bay seawater and freshwater from the Churchill river meet.

We went by the shuttered Port. I took some pix for those who want to model one. (extra images of the port are available upon request).

After that, we checked into our hotels. We were spread out into three hotels, I stayed in the Bear Country Inn with 17 others. We then toured around town to shop and explore. Between my tour duties, I headed out and quickly took some pix of the train still parked at the station.  Our train would head southbound later in the evening.  We had an Arctic Char welcome dinner at the Seaport Hotel before tuning in for the main event tomorrow. Da Bears! 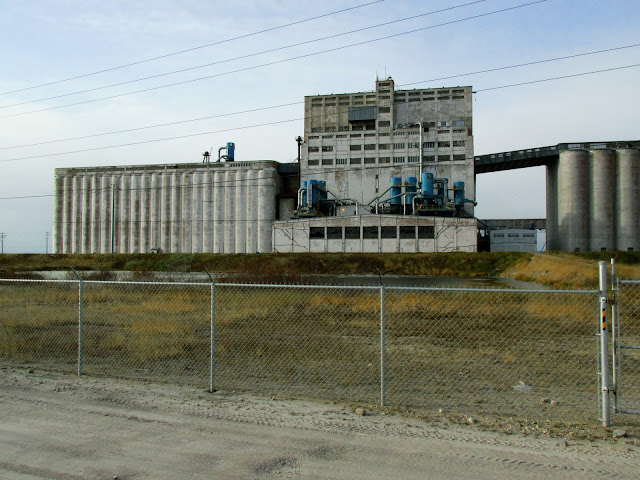 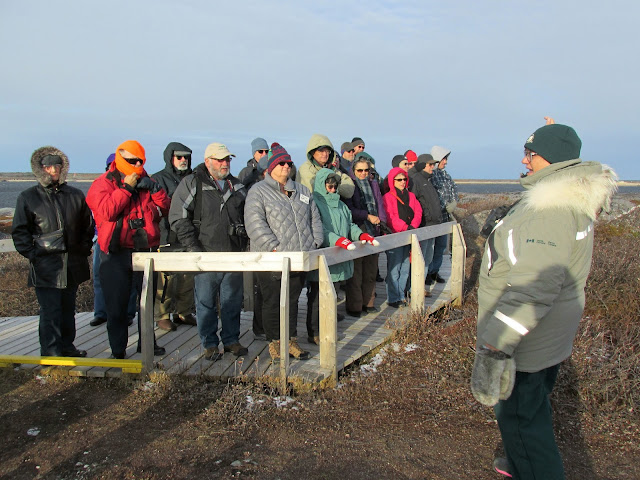 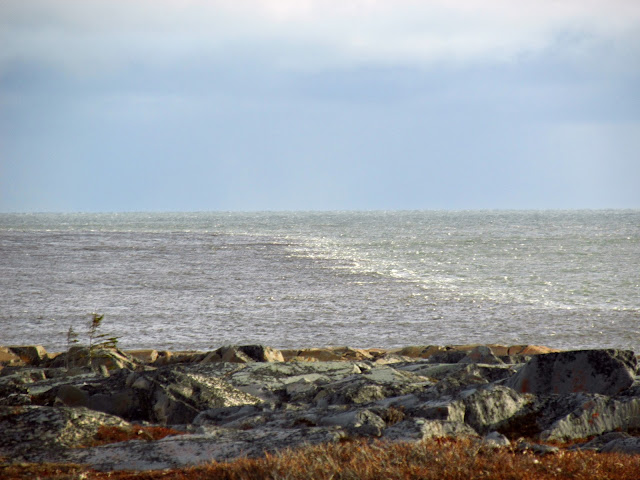 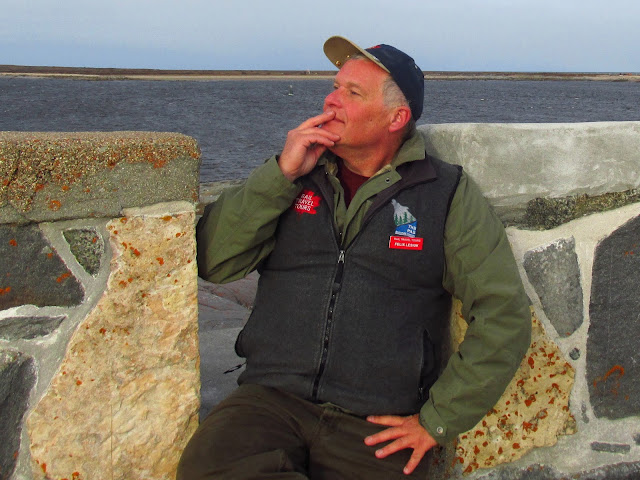 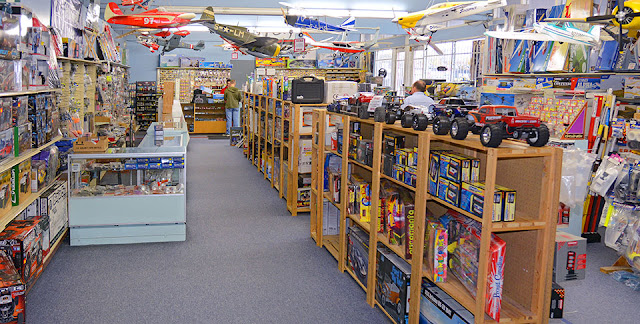 In the wake of the demise of Gooch's Hobbies, we've received notice from Cellar Dweller Hobbies that they're alive and well, and that they've expanded their stock of Woodlands Scenics products, including their line of scale model trees!

Jim Holland of Cellar Dweller said that if model railroaders begin coming into the store that they would begin to carry more model railroad products and accessories.

Modellers have been going to Cellar Dweller over the years for Styrene and strip wood supplies. They do have a very limited stock of low-end model railroad rolling stock  items and a few plastic building kits. Jim has said that the shop might begin to carry a better range of model railroad items if he thought that modellers might begin asking for such items.

Now that most of the other model railroading shops in town are gone they might be willing to fill the model railroading niche to some degree in Winnipeg. So what are you waiting for? Contact them and start asking! Cal them at 204-589-2037 or toll free at 1-866-248-0352, or send them an email at cdhobby@mts.net
Posted by Paul Ullrich, WMRC Blog Editor at 7:00 AM 2 comments:

Model railroad auction in Austin, Manitoba to be held this Saturday 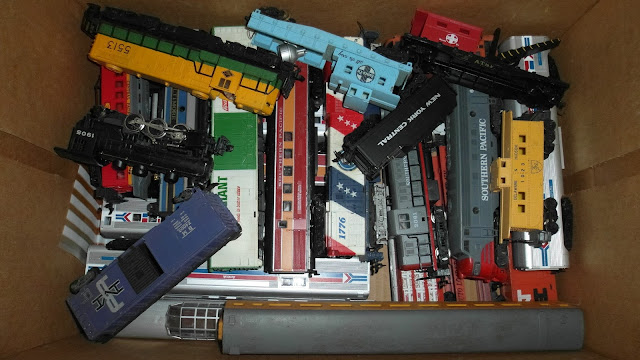 Ray and Mary Peck's HO scale layout and equipment is going to be sold at an auction on Saturday, October 22 in Austin, Manitoba. Included are HO scale higher end era trains, rolling stock and accessories too numerable to mention.

"I had an opportunity to visit this layout last year and it's spectacular!" Says long time WMRC member and program director Morgan Turney.  "They are retiring off the farm and it's all being sold."

Check the Nickel Auctions website for more information at www.nickelauctions.com or email them at nickelauctions@mymts.net 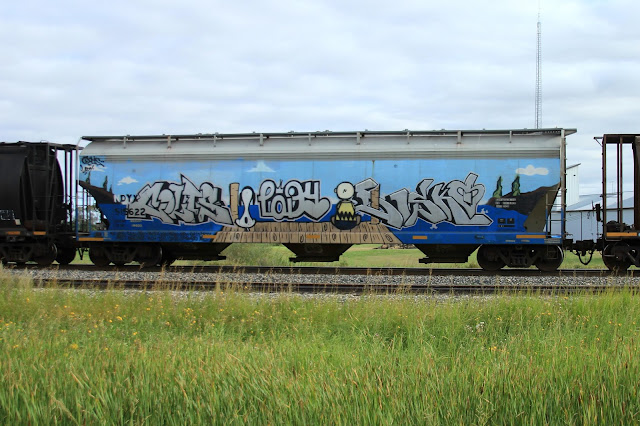 Felix Lesiuk captured this great image of Charlie Brown and Snoopy graffitied onto a grain hopper.

Long time WMRC member Felix Lesiuk sends us many photos taken during his rail fanning trips with his good friend and fellow WMRC member Louis Lenz. This post features the wild world of railroad graffiti images that he has taken. There doesn't seem to be any limit to the imagination (or to the spray paint supply) of these roving bands of artists who haunt the rail yards of North America. Enjoy their creativity! 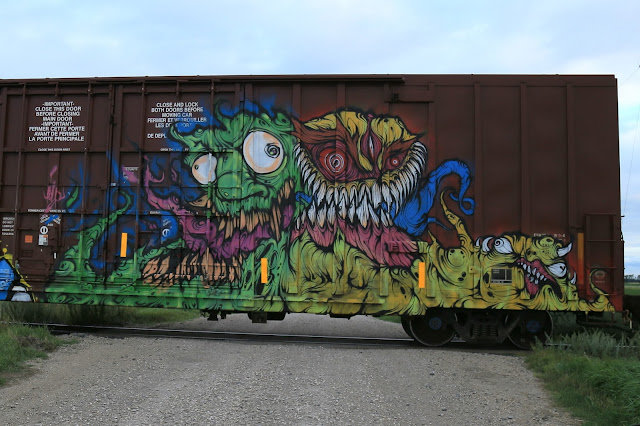 How many spray cans do you think someone used to create these beasties? 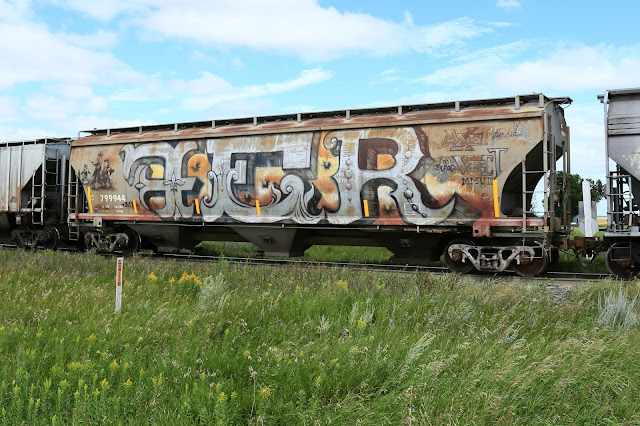 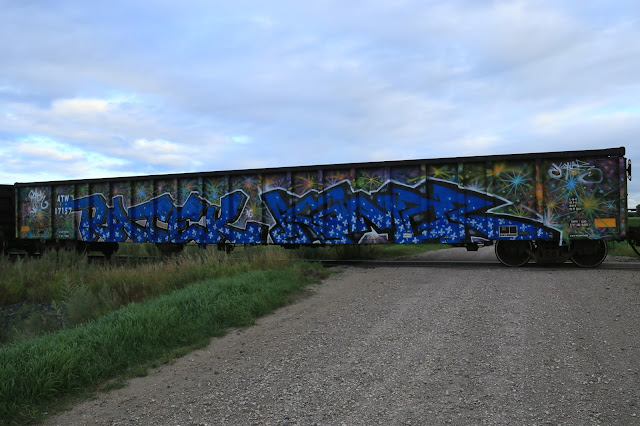 A star burst design really brightens up this ordinary gondola!
Posted by Paul Ullrich, WMRC Blog Editor at 7:00 AM No comments: 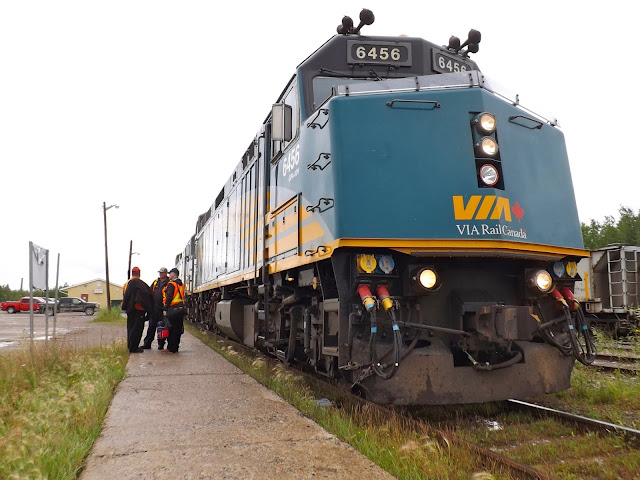 At October's WMRC meeting, Suzanne Lemon will give us a short program on "What Makes a Good Photo" to enter into the Club's photo contest. After a short break, Christopher Robinson will present "Railfanning Adventures in Southern Manitoba" which includes a look at Central Manitoba Railway operations down Hwy 3 in the Brunkild area.
And to all WMRC members: Feel free to bring a modelling project to work on as a table clinic during the meeting!

The meeting starts at 7:30PM at the Charleswood Legion, 6003 Roblin Boulevard, on Friday, October 14, 2016. The canteen will be open, and we'll be holding our usual modelling display and the 50/50 draw. Hope to see you all there!
Posted by Paul Ullrich, WMRC Blog Editor at 6:30 AM No comments: 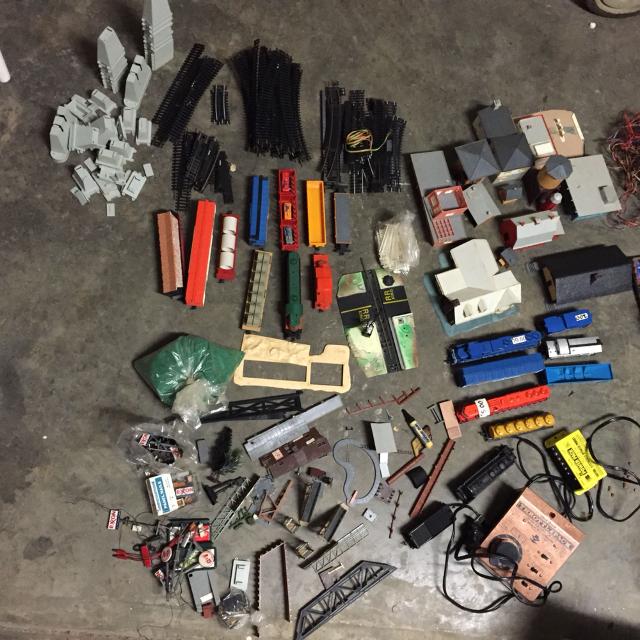 A large HO model railroad garage sale will be held on Saturday, October 15 from 9am to 3pm, 627 David St., which is about a half block north of Portage Ave.

A complete 21x6-foot finished shelf layout will also be up for sale. For a complete list, e-mail Bruce at: va4bb@shaw.ca
Posted by Paul Ullrich, WMRC Blog Editor at 6:30 AM No comments: 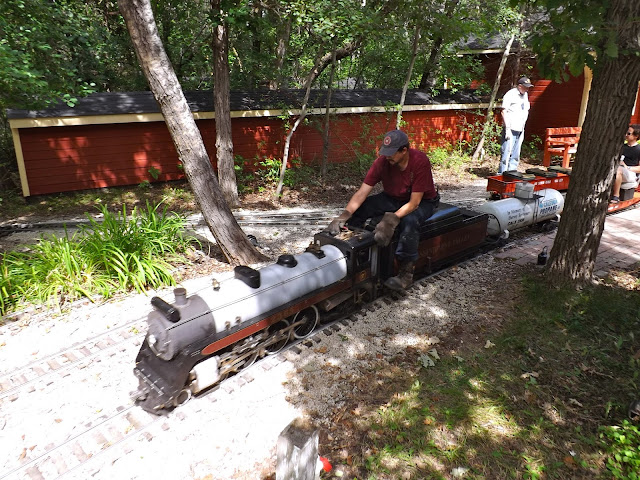 The AVR is open to the public on Saturday, September 8 from 11:00AM to 5:00PM. and on Sunday from 1:00PM to 5:00PM. It's only two bucks a ride, and kids two year of age and under ride for free! All minors must be accompanied by an adult. A 12 ride pass is available for only $20. The AVR is located at 3001 Roblin Boulevard, just west of Assiniboine Park.
Posted by Paul Ullrich, WMRC Blog Editor at 6:30 AM No comments: 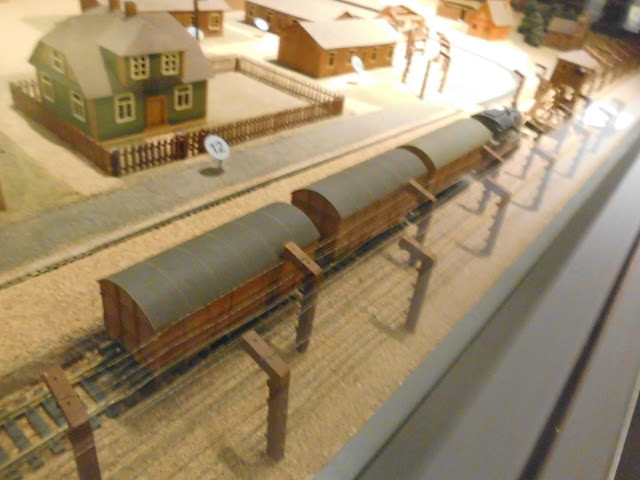 The Los Angeles Museum of the Holocaust has an HO scale model of the train that took the Jews to the death camp in Sobibor.

A reader has sent us images of a very unusual model railroad display from the Los Angeles Museum of the Holocaust. The images are of a model of the extermination camp at Sobibor, including the train that brought the Jewish prisoners to the camp during World War Two.

These images might be considered disturbing to some, but it also serves as a very strong and poignant way of showing how model railroading skills can be used to educate and convey a powerful message to anyone who views display such as this.

It must’ve taken an incredible amount of intestinal fortitude to even model a scene like this, and we applaud the museum’s efforts to educate the public about one of the most horrifying events in human history through the medium of model railroading.

For more information about the Los Angeles Museum of the Holocaust, visit their website at:

Note: Copy for this post has been corrected from its original version, thanks to the comment left by Randy Schoenberg, who spotted that the model was of the dead champ at Sobibor, and not Treblinka. 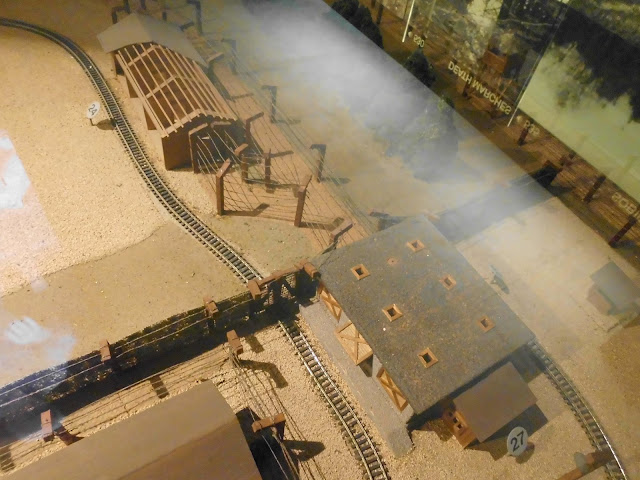 Painstakingly exact detail went into the modelling of the Sobibor death camp. 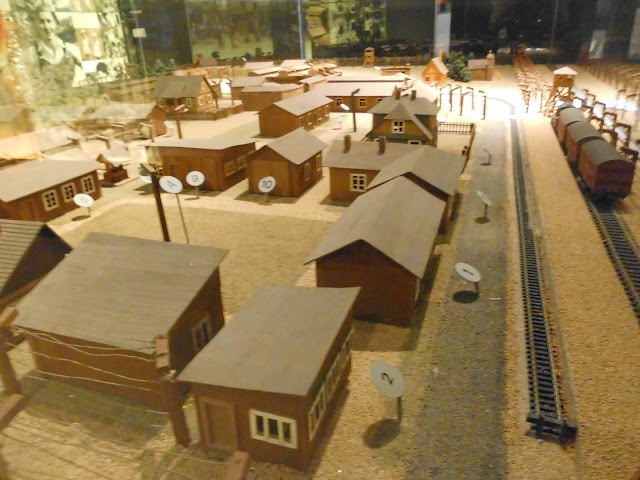 The numbers correspond to the text provided, describing what each building was used for.
Posted by Paul Ullrich, WMRC Blog Editor at 6:30 AM 6 comments: