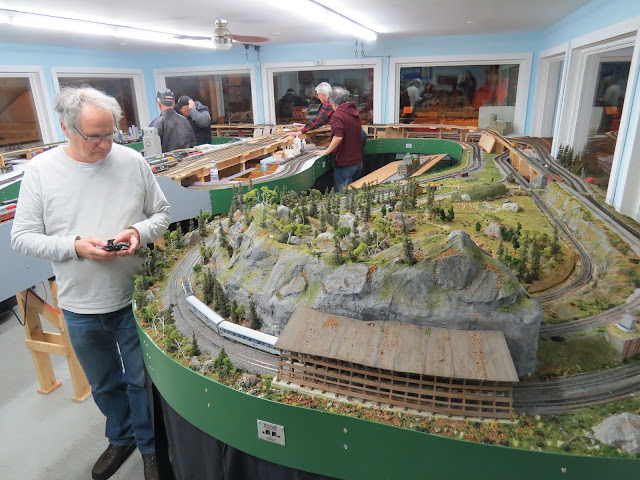 The Gateway Western is almost as old as the WMRC itself. There have been several Gateway layouts in different locations for well over a half a century. The first one was on the main floor of Winnipeg's Union Station. That layout was torn down to make room for a larger bathroom for the station.

Its next incarnation was at Gooch's hobbies in its Sherbrook street location. This layout was taken apart and stored in a local warehouse when Gooch's hobbies moved their store to Portage Avenue.

Thanks to the combined efforts of the WMRC and the Winnipeg Railway Museum, the Gateway was once again resurrected and returned to its original location at Union Station. A tireless band of volunteers assembled an insulated, heated structure within the museum that houses what is now the largest permanent layout in the province.

When the health crisis has abated, the Gateway and the Winnipeg Railway Museum will reopen. Notices of the reopening will be posted on this site and on the club's Facebook page.

Posted by Paul Ullrich, WMRC Blog Editor at 6:40 AM No comments:

Two model railroad events have been cancelled due to the COVID-19 pandemic. Supertrain, Canada's largest train show, has been held in Calgary since 1995. On March 13, the Calgary Model Railway Society announced the cancellation. Tentative plans are to hold Supertrain on April 10 and 11, 2021 at its usual venue at the Genesis Centre in Calgary.

The Thousand Lakes Region of the NMRA announced today that their upcoming spring convention, titled the Sioux Empire Special, has been cancelled. The next TLR convention will be held in Bismarck, North Dakota in May 2021.
Posted by Paul Ullrich, WMRC Blog Editor at 12:23 PM No comments: 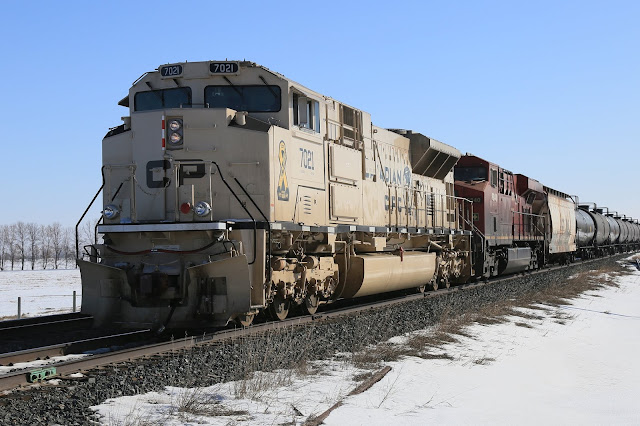 On March 10, just one day before the COVID-19 virus outbreak was declared a pandemic, long time WMRC members Felix Lesiuk and Louis Lenz went out for what just might be their last day of of rail fanning for a while. Felix caught a CP freight with a freshly painted locomotive brandishing their recently announced military paint scheme near Austin, Manitoba.

Due to the pandemic, we do not know when there will be Felix's next rail fanning excursion, so enjoy these photos, keep safe, practice social distancing, work on your layout and build some models until this health crisis is all over. 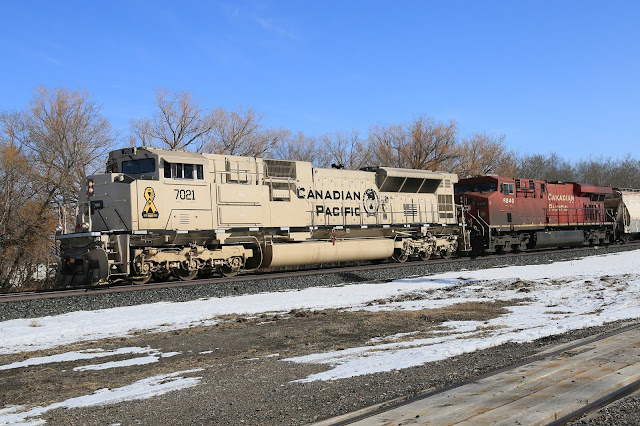 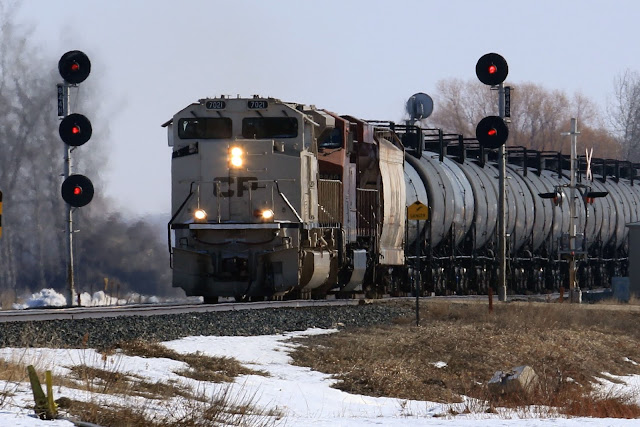 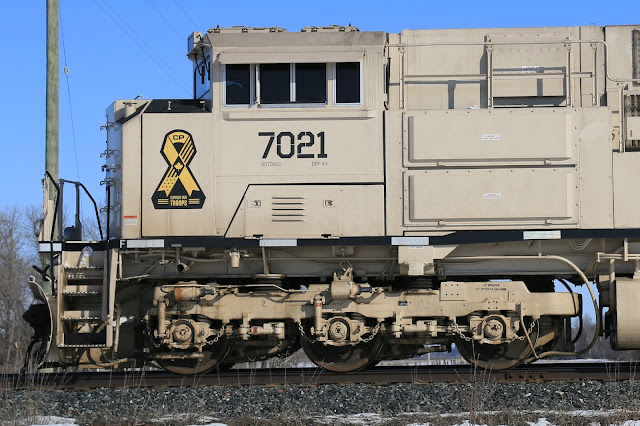 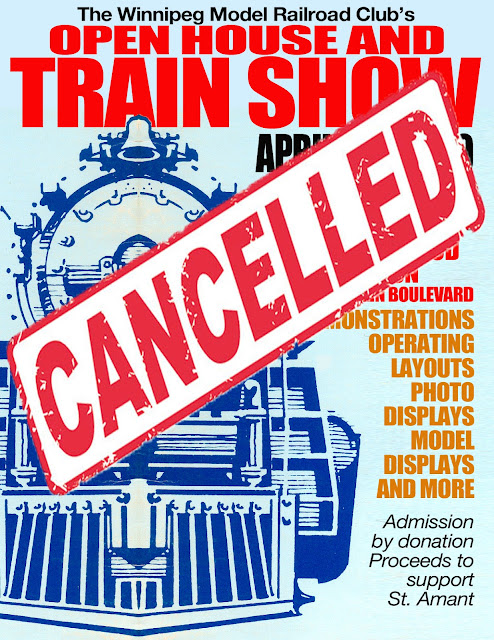 The Winnipeg Model Railroad Club has cancelled their spring open house due to health concerns over the COVID-19 corona virus pandemic. This decision was not taken lightly, and the board's vote to cancel the event was unanimous. In the 65 years the club has been in existence, we have never cancelled our spring open house. But it is imperative that we put the health and safety of our many visitors and our members above all else.
Posted by Paul Ullrich, WMRC Blog Editor at 1:13 PM No comments: 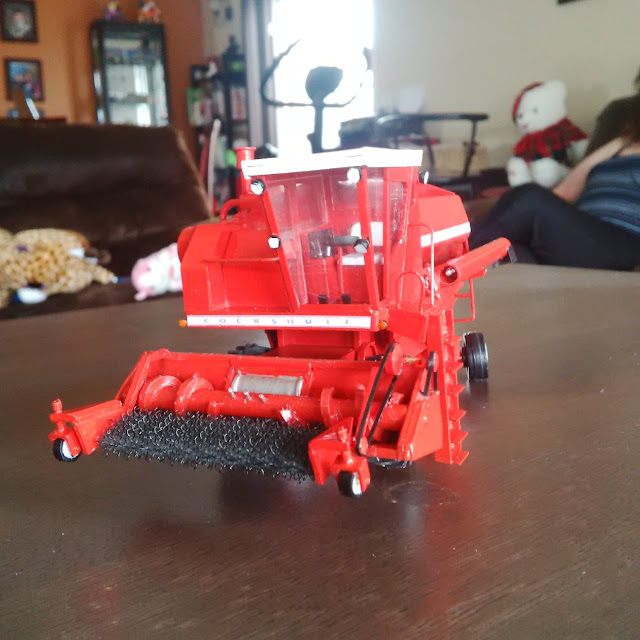 An example of the exquisite modelling techniques of Pat Hancox, who will give a presentation at the WMRC's March meeting.
The Winnipeg Model Railroad Club  will hold two great clinics at their March meeting. First up is Pat Hancox, a model builder who builds just about anything that strikes his fancy. He models in a variety of scales, scratch building or kit bashing as he chooses. You may have seen Pat at the Manitoba Mega Train Show where his diorama featured a stream with real running water. Pat will talk about his techniques and may have a model or two to show at the meeting.

Then WMRC treasurer John Bate will present the second part of his 3D printing clinic. He will have a sample of parts that he has printed using the same techniques that he'll talk about. 3D printing is cutting edge technology that anyone can use. Here is your chance to learn!

The fun begins at 7:30PM on Friday the 13th at the Charleswood Legion, 6003 Roblin Boulevard. The canteen will be open, and we'll have out monthly model and photo displays. Hope to see you all there!
Posted by Paul Ullrich, WMRC Blog Editor at 1:31 PM No comments: