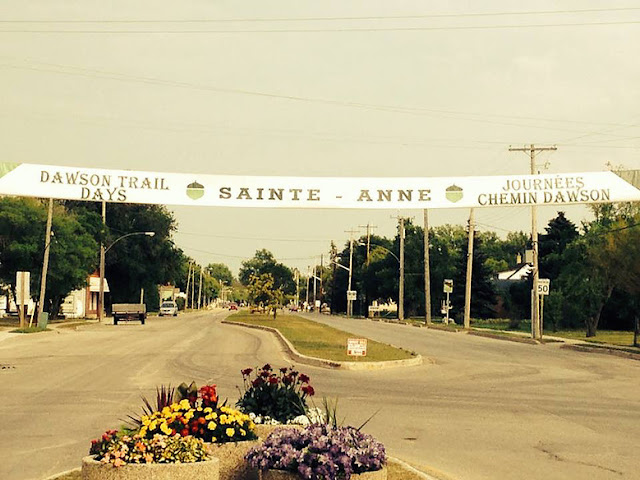 Named after the historic Dawson Trail that crosses the village of Ste. Anne, Dawson Trail Days are held every September long weekend. The three-day festival features baseball, a parade, music and dancing, kids zone, youth talent competition and fireworks. This popular community event is a sure sign that summer is drawing to a close.

Ste. Anne is conveniently located east of Winnipeg, off the Trans Canada Highway. Turn off on Highway 12, then take Highway 207 east to Ste. Anne.

To view or to download a PDF of all of the activities that are being held during Dawson Trail Days, click here.

Posted by Paul Ullrich, WMRC Blog Editor at 11:04 AM No comments: 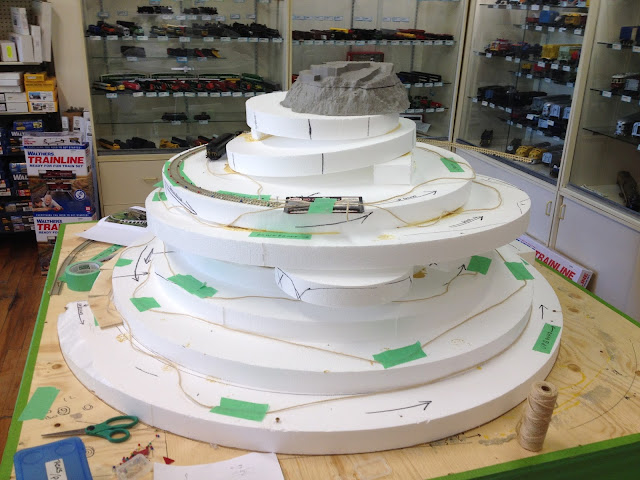 If you haven't been to Toad Hall Toys lately to check out their model railroad department, then it's worth the trip! Darryl Audette has taken over the reins, and he's making some changes! Pictured above is his work in progress in the store, which promises to be a terrific display when it's finished!

As you can see from behind his layout, the place is very well stocked with all sorts of mode railroad goodies! It is very gratifying in these days of hobby shop disappearing or downsizing to see that Toad Hall is not only still in the game, but is expanding!

Toad Hall has been a supporter of the WMRC for many years, and has continued to faithfully advertise in the clubs. official publication, The Lantern. Every member in good standing receives a 10% discount on all no-sale in-store model railroad items, so be sure to bring your card the next time you go! 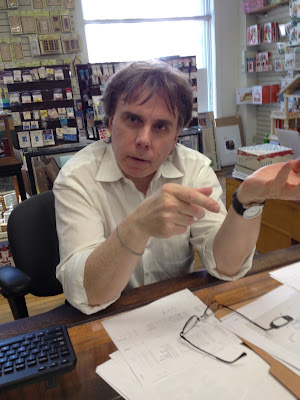 Darryl Audette, published miniaturist, general brilliant person and all around great guy is in charge of Toad Hall's model railroad department.
Posted by Paul Ullrich, WMRC Blog Editor at 8:46 AM No comments:

Two exciting open houses on tap for this weekend 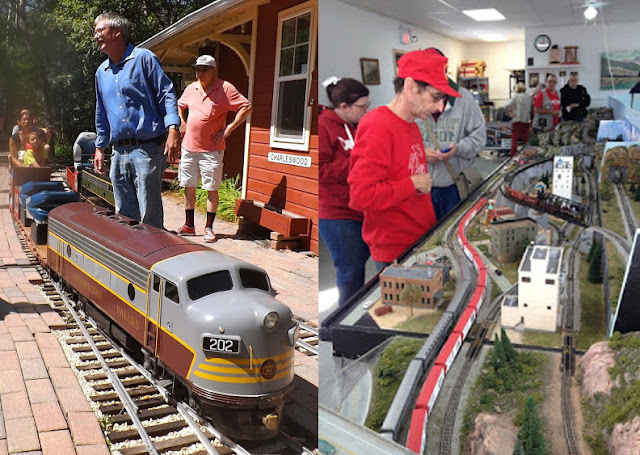 How’s this for fun? The Assiniboine Valley Railway and WinNtrak will both be holding open houses this weekend!

WinNtrak’s clubhouse and layout will be open between 1:00 PM and 4:00 PM on Saturday, August 27 and Sunday, August 28. Their clubhouse is located in the parking lot of the Prairie Dog Central complex, and admission is free!

It's just two bucks a ride, and kids under two years of age ride for free. All minors must be accompanied by an adult. A 12 ride pass is only twenty bucks! 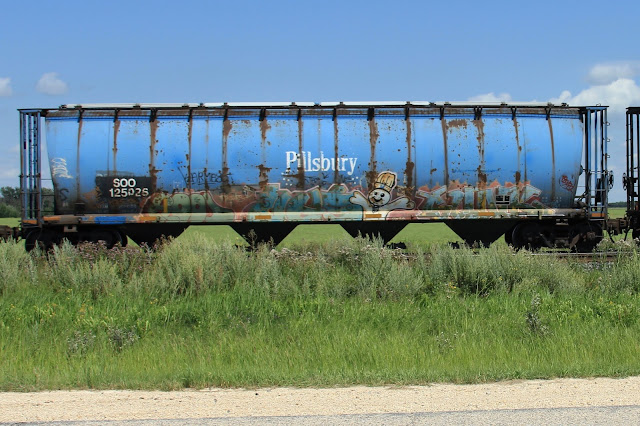 On a recent rail fanning trip, Felix Lesiuk took this whimsical image of a Pillsbury grain hopper with the Pillsbury doughboy graffitied on it. Good eye, Felix!

Since his recent retirement from school teaching,  long time WMRC member Felix Lesiuk has kept himself very busy! He's the president of WinNtrak, and he also conducts tours to Churchill for Rail Travel Tours, which is owned and operated by another long time member, Daryl Adair!

But he is best known at the club for his many award winning railroading images. He goes rail fanning on a regular basis with his old friend and long time WMRC member Louis Lenz, and he has shared many of his images with us.

From time to time, we will be posting his images on this site. Keep up the great work, Felix! 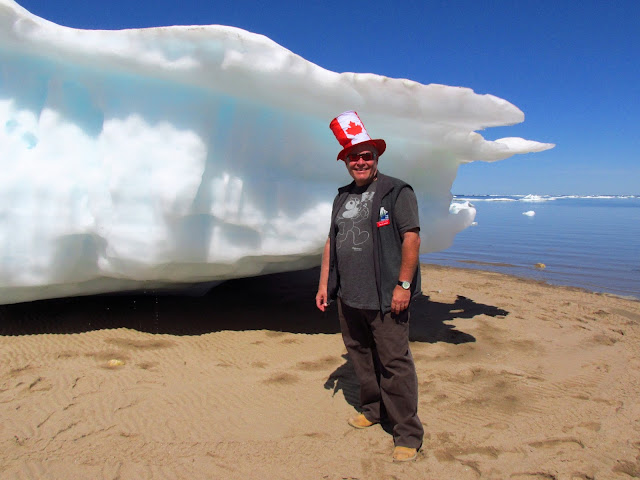 Felix celebrates his birthday and Canada Day on the sunny shores of Churchill, Manitoba.
Posted by Paul Ullrich, WMRC Blog Editor at 11:04 AM No comments: 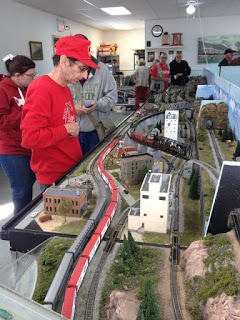 All aboard for a WinNtrak open house this weekend! Their clubhouse and layout will be open to the public between 1:00PM and 4:00PM on Saturday, August 20 and Sunday, August 21. Their clubhouse is located in the parking lot of the Prairie Dog Central complex (that's right behind their freight shed). While you're there, you might want to take a ride on the Prairie Dog Central itself! But check their website first to see if tickets are still available! For directions on how to get there, click here.
Posted by Paul Ullrich, WMRC Blog Editor at 11:47 AM No comments: 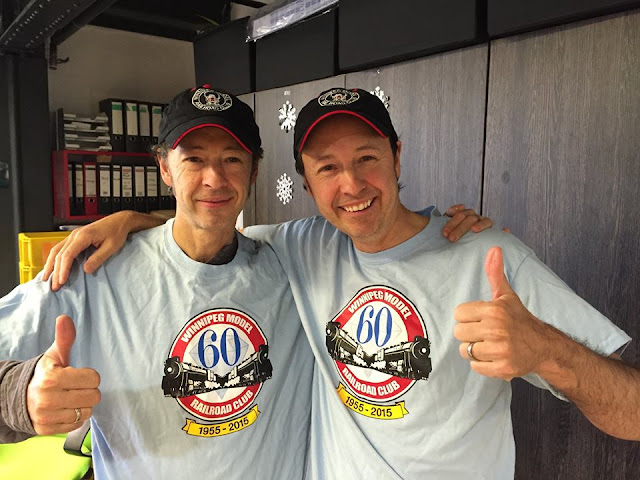 How cool is this? Our club's 60th anniversary t-shirt, designed by WMRC blog editor Paul Ullrich, has been featured in another Miniatur Wunderland video! Dave Downie, our intrepid Vice-President, discovered it and sent us the link!

The video is about the making of a volcano for their world famous layout, but in the first three minutes of the video, the creator of the volcano is prominently wearing our t-shirt! You can see the video by clicking here.
Posted by Paul Ullrich, WMRC Blog Editor at 11:31 AM No comments:

All aboard for the Assiniboine Valley Railway's first August open house 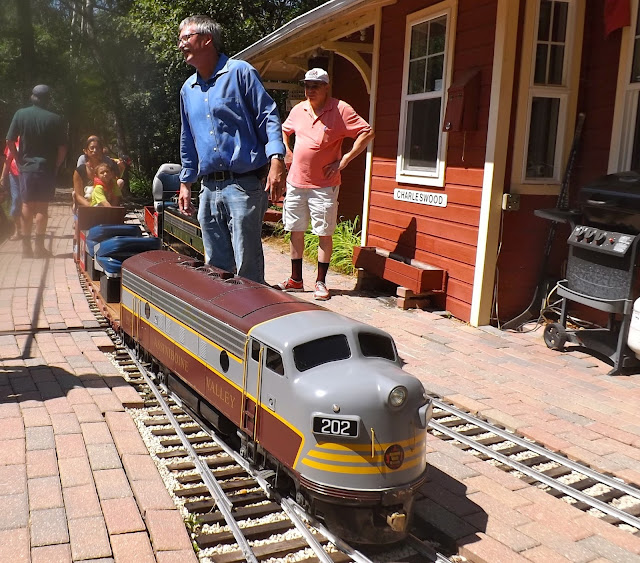 
It's time to take another ride on the trains at the Assiniboine Valley Railway's first open house for August! That's right! They're holding two open houses for August, just like they did in July!
Their hours are from 11:00AM to 5:00PM on Saturday, August 13, and from 1:00PM to 5:00PM
on Sunday, August 14.

Their next open house will be held on the weekend of August 27 and 28. Starting in September
they will go back to their usual schedule of having only one open house per month.
The Assiniboine Valley Railway is located at 3001 Roblin Boulevard, just west of Assiniboine Park.
It's just two bucks a ride, and kids under two years of age ride for free.

All minors must be accompanied by an adult. A 12 ride pass is only twenty bucks!

Posted by Paul Ullrich, WMRC Blog Editor at 10:42 AM No comments: 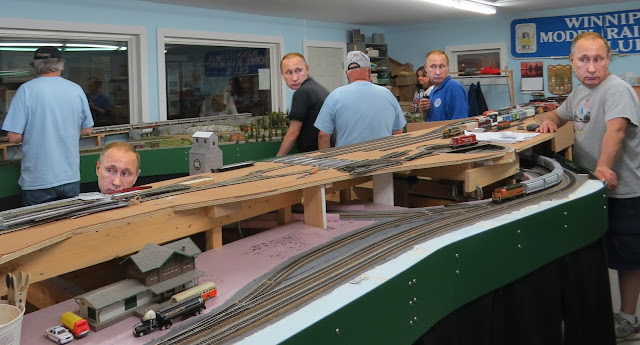 Some very suspicious characters have been spotted at the Gateway Western Railway recently.


Last month, the  WMRC blog had a surprising and very suspicious increase in the number of hits it received from Russia. On July 21, we had 1,030 views, mostly from Russia. On July 26, we had 807, also mostly from Russia. Our average daily number of views is usually around 130. There couldn’t be that many model railroaders in Russia who are interested in our club, which led us to suspect that Russian “bots” (which is a slang term for “robots”, which are actually programmed computers) were cruising the site for personal information.

Please note that the WMRC blog has never posted any personal information other than the names of some of our members, and the location of our meeting places and open houses. So the robots aren’t going find anything, but that won’t stop them from trying.

So we beefed up the security of the blog site. You might notice that the site's web address  now has an HTTPS in front of it, which means that it’s an encrypted site, just like the websites of the banks and any places of business that exchange money on-line. This will prevent the robots from investigating the site, but it will also mean that the number of hits we receive will be discernibly less.

Last month we got 7,202 hits, which is a record breaker, but it doesn’t mean very much outhouse hits were created by Russian robots. Last week we got all of two hits from Russia.


Let’s see how many hits we get in August. Regardless of the amount, at least they'll be honest ones!

Posted by Paul Ullrich, WMRC Blog Editor at 11:03 AM No comments: