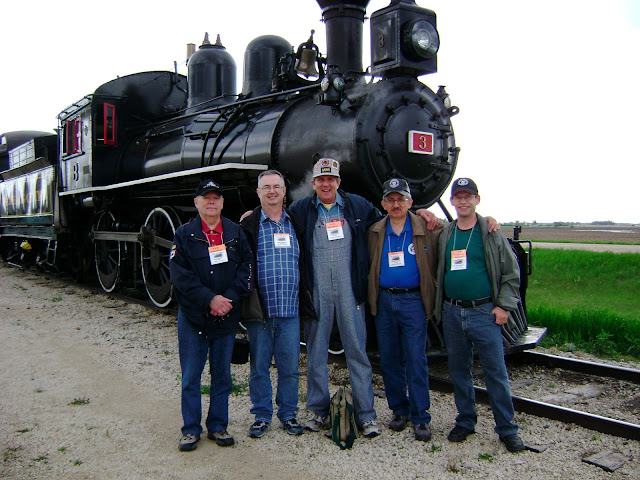 Roger (far left) is seen with Ron Einarson, Paul Ullrich Dennis Rietze and Sid Greenstone in from of the Prairie Dog Central’s #3 locomotive during the 2010 TLR convention in Winnipeg.

Roger was born and raised in Brooklyn, New York. He had a long career in electronics and worked for companies such as Bulova, Gulf and Western, Curtis Wright and the Westinghouse Corporation. He was the designer and Project Engineer for the nuclear reactor rod control system installed on the aircraft carrier U.S.S. Enterprise.

He met his wife Beverley, a nursing student from Manitoba, while she was working at Mount Sinai Hospital in Manhattan. They were married in 1963 and moved Winnipeg in 1971. He worked as the sales manager of video systems for Servo Electronic Systems, providing television systems for Manitoba and Northwestern Ontario until he retired in 1999.

Roger was a member of the WMRC and the NMRA for close to 40 years. He attended the NMRA national convention in Winnipeg in 1983 and TLR conventions in 1996, 2003, 2006, 2008 and 2010. When the TLR’s local group, No. 1 Northern Division, was in danger of being delisted he was a driving force in helping the group’s reorganization.

Roger saved the lives of three of his fellow WMRC members Arnie Walker, Norm Leathers and Paul Ullrich in 2003 when they were travelling to the TLR convention in Thunder Bay. When it was his turn driving, a moose suddenly walked onto the Trans Canada Highway east of Dryden. He expertly swerved, braked, and honked, scaring the moose out of the way.

Roger was on the organizing committee for the 2010 TLR convention in Winnipeg. He came up with the name of the convention, “Steam on the Prairies”. He was a tireless and dedicated volunteer for this convention, assisting in securing the venue, the rental of the Prairie Dog Central Railway, choosing the restaurant for the banquet, renting the bus for the rail fan trip to Portage La Prairie and the rental of the banquet tables for the Friday night barbecue.

He and former WMRC Treasurer Dennis Rietze designed the modules for the No. 1 Northern Division’s Free-Mo modular layout. Roger continued to be active in the TLR and the WMRC until Beverly’s passing in 2014. He moved to Regina in 2015 to be closer to his son, Anthony. He died peacefully in Regina at age 85. 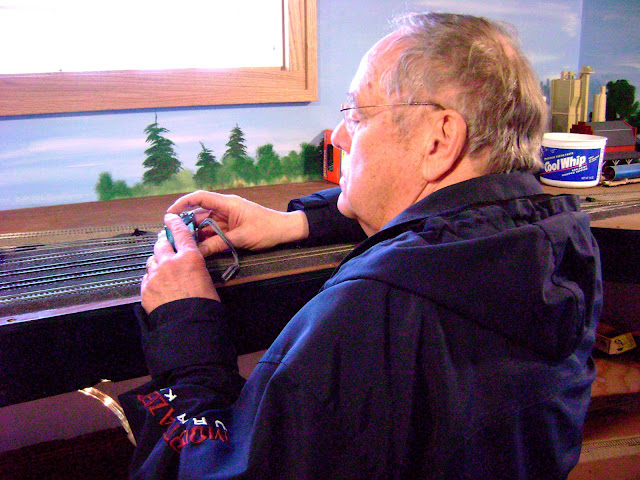 Roger is seen taking a photo of a layout during the TLR convention in Duluth, Minnesota in 2008. 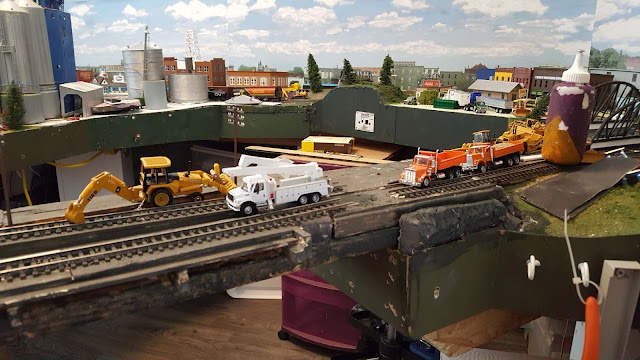 During these trying times of COVID-19, former WMRC Treasurer Dennis Rietze is keeping busy constructing his HO layout, which he calls the Twisted Creek Railway and Construction Company.

Dennis designed the layout to fit in the spare bedroom of his apartment. It is completely modular, built in sections which can be removed without any damage to the layout or to the room. By using a series of rectangular posts instead of 2x4’s to support the layout, it provides ample room for storage underneath, and it is wheelchair accessible.

Dennis’ latest project has been bridge construction, and as you can see he’s even modelling it, using HO scale dump trucks and earth moving equipment. 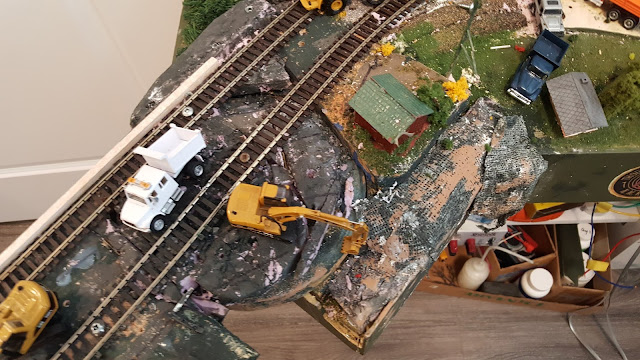 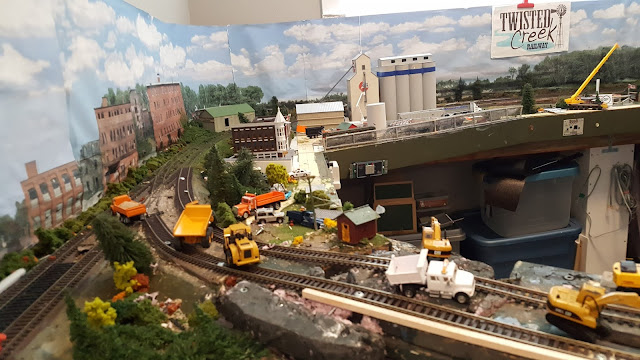 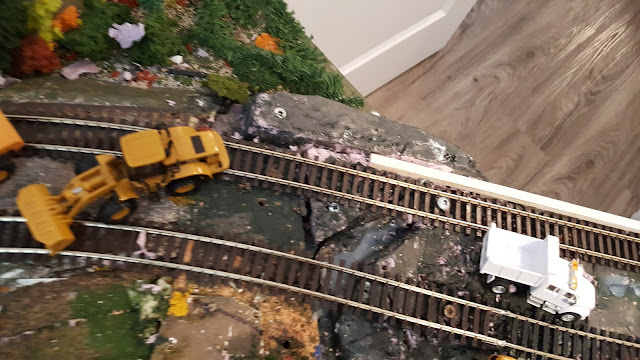 Prairie Dog Central cancels the rest of their 2020 season 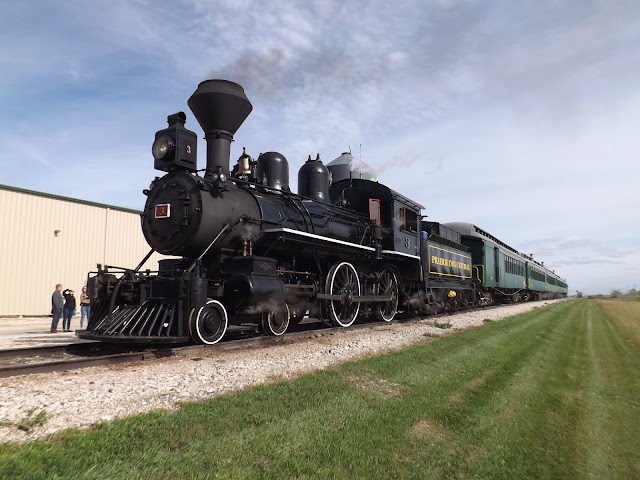 The remainder of the season for the Prairie Dog Central has been cancelled due to concerns over COVID-19. This is the first time in 21 years that their season has been completely cancelled. The last time one of their seasons was cancelled was when they relocated to their present location on Inkster Boulevard.


Paul Newsome, general manager of the Vintage Locomotive Society which operates the train, stated that they felt that they could not live up to social distancing inside the train coaches without putting families and passengers at risk.

All events planned for May, June and July for the Prairie Dog Central had already been cancelled. The fall season brought such popular events such as the fall supper diner train and the Halloween train.

The railway's remaining source of revenue is a commercial train car storage business, where the trackage is used to store rolling stock from other railroads.
Posted by Paul Ullrich, WMRC Blog Editor at 12:12 PM No comments: 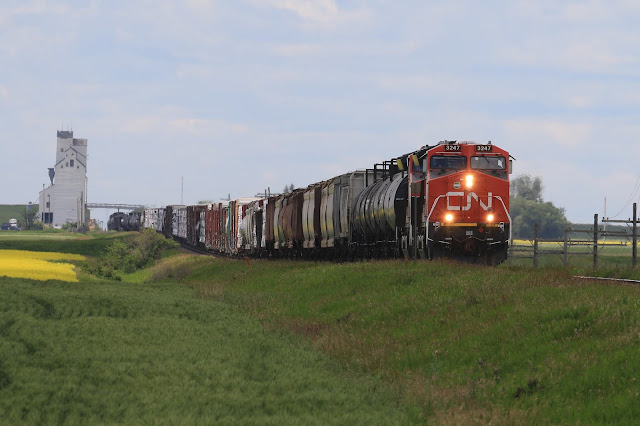 Long time WMRC member Felix Lesiuk took two rail fanning trips with Louis Lenz riding shotgun. They headed west and made it to Harte and Moffat, two popular rail fanning sites. Harte has an iconic grain elevator which makes for some spectacular shots. Despite light rail traffic due to track maintenance, he managed to take some excellent pictures. After experiencing some heavy rain, he was rewarded with a rainbow that took direct aim at some MOW equipment. 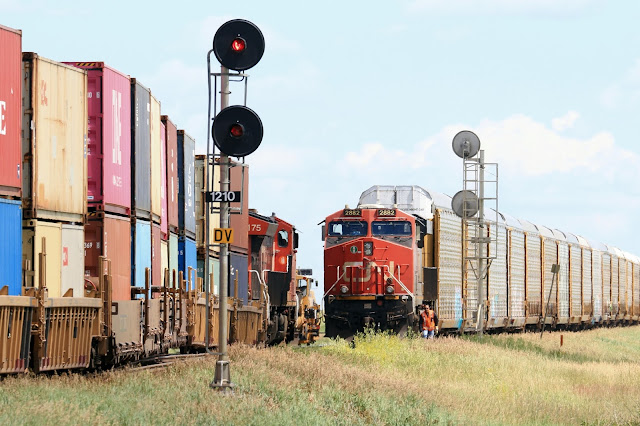 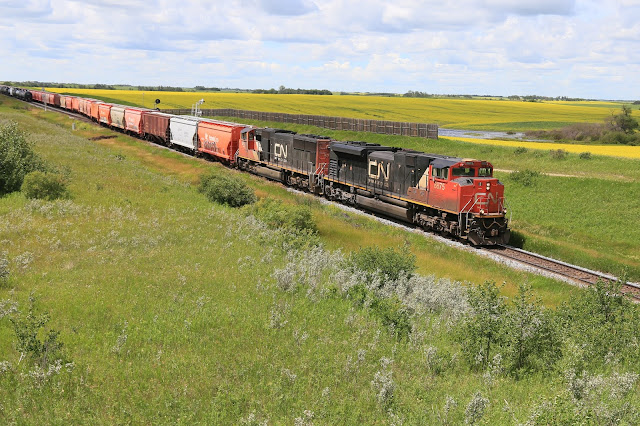 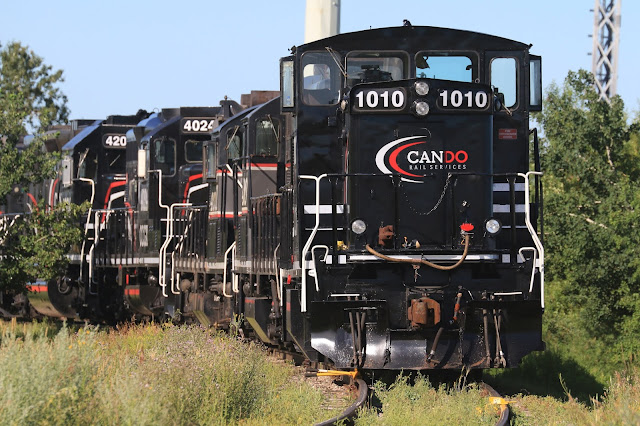 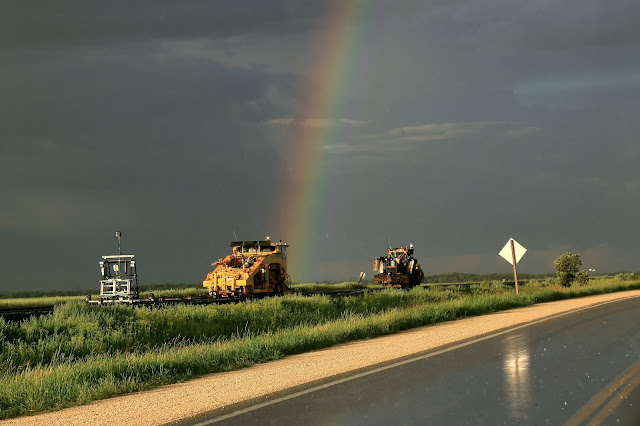 Posted by Paul Ullrich, WMRC Blog Editor at 11:31 AM No comments: