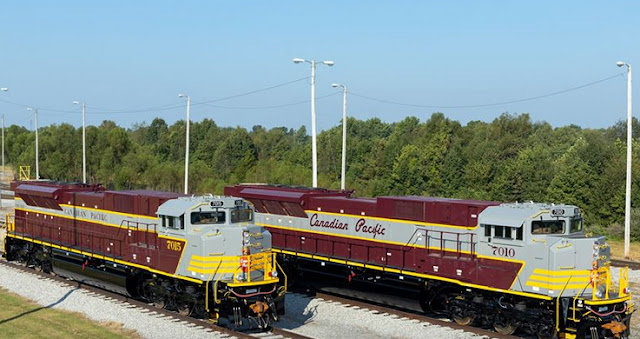 How cool is this? CP Rail has revealed a set of SD70ACU locomotives done in their iconic and beloved maroon and grey paint scheme.Up until now, CP and CN have been the very last class 1 railroads who had not painted heritage colors on any of their modern locomotives. In the early 2000s, it painted a GP38-2 and FP9s used for its business train and other excursions.

CP will be painting a total of 10 units, five with block lettering and five with script lettering. The other eight locomotives will be painted in heritage colors by the end of the year. The locomotives are expected to be in service primarily in Western Canada. Rail fans all across the country can't wait to see these modern locomotives with that classic paint scheme in action!
Posted by Paul Ullrich, WMRC Blog Editor at 6:00 AM