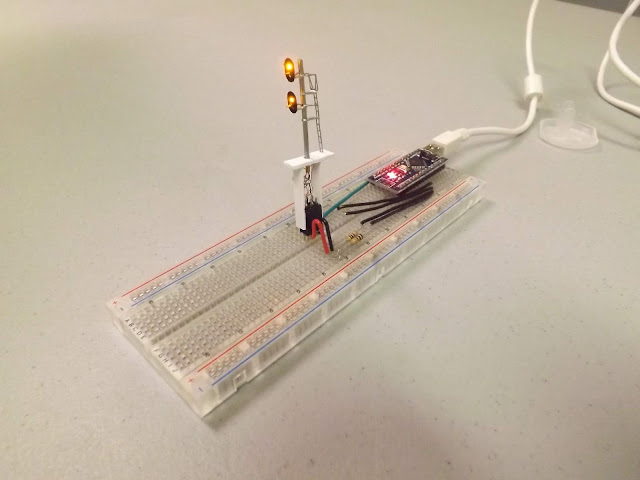 WMRC treasurer John Bate brought in this nifty N scale 2-over-2 signal that he has been working on to the club's monthly model display. He started with a laser-etched brass kit from Train Cat Models (now no longer available). It was assembled with CA, then some parts were re-done with solder. Some old lumpy steel colored paint gave it a rather poor finish. It was then modified to enable the installation of four extremely tiny LEDs.

There are eight wires hand-threaded through the main vertical tube. The Styrene parts below the signal are to enable it to be easily inserted and removed from the layout. An Arduino with a short test program is being used to cycle all of the LEDs to test them.
Posted by Paul Ullrich, WMRC Blog Editor at 7:00 AM No comments: 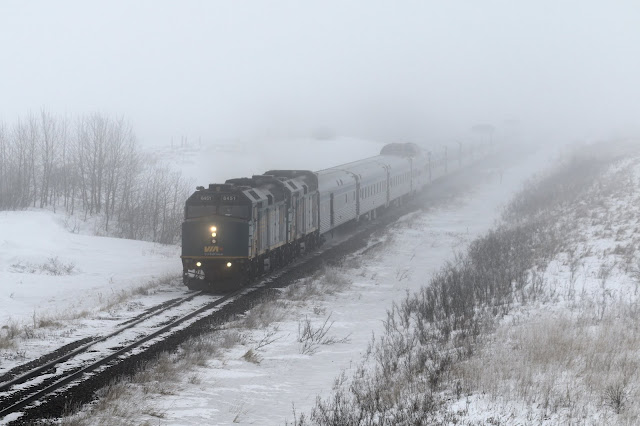 Our intrepid staff photographer Felix Lesiuk and Louis lenz braved the cold January weather and headed west on what was supposed to be a bright, sunny day! They made it as far west as Moffatt, where it was very foggy. They caught Via's Canadian speeding by at 75mph, a new CP grain hopper with their new logo design in Portage la Prairie and a variety of air repeater cars on the CN mainline. Other than the lack of sunshine, they had a great day! 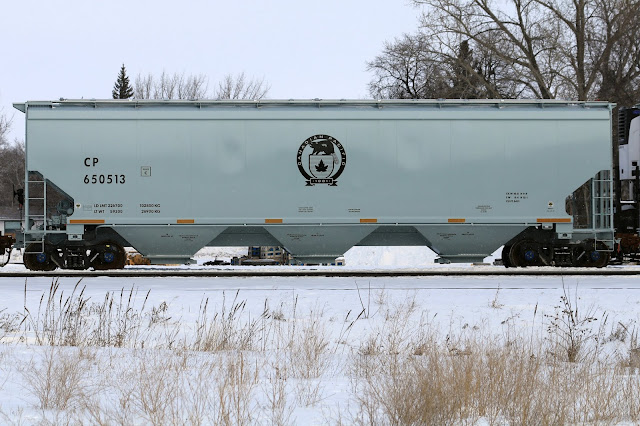 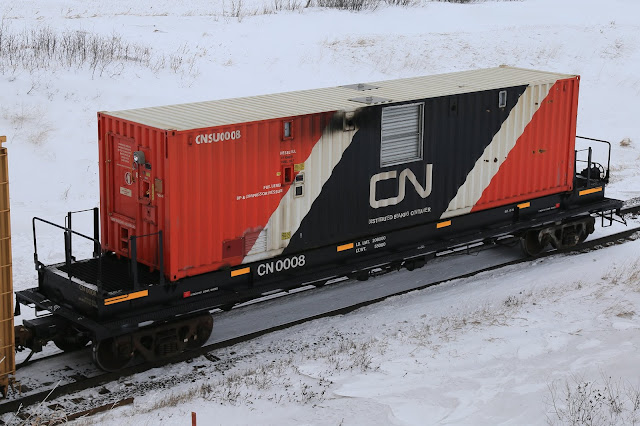 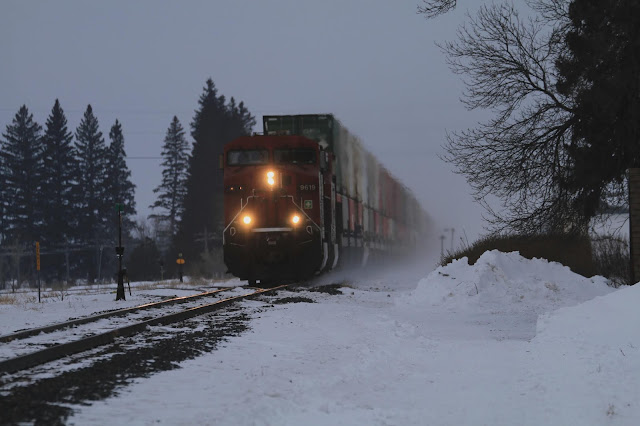 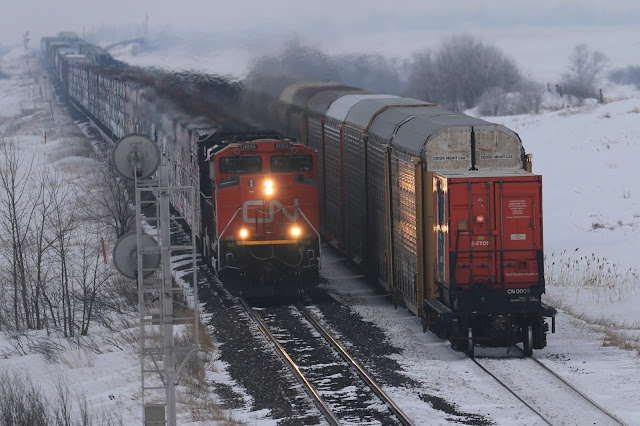 Posted by Paul Ullrich, WMRC Blog Editor at 8:11 AM No comments: 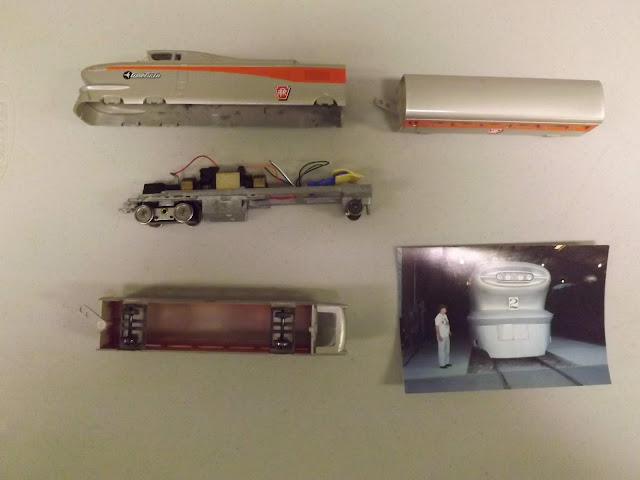 In the 1950’s General Motors was asked to produce a lightweight high speed passenger train. The result was the GM Aerotrain which consisted of a streamlined locomotive and cars which were widened GM bus bodies. The four wheeled cars were rough riding and though some railroads tried them, no railroads bought them. Bowser eventually bought the dies from Varney for an ‘HO’ version and this is what Norm started with.

The Bowser kit was not powered and so Norm started by sawing off the cross member of the frame that was supported by the front truck. An Athearn switcher was used for power. The switcher body was removed and the frame was cut in front of the rear truck.

The wheels on the cars were pushed into slots on the ends of posts fitted to the cars. Friction was so great that the locomotive could not pull the three cars in the set. Parts from Rivarossi three axle passenger trucks were modified to accommodate Kadee wheel sets. The locomotive now easily pulls eight cars. 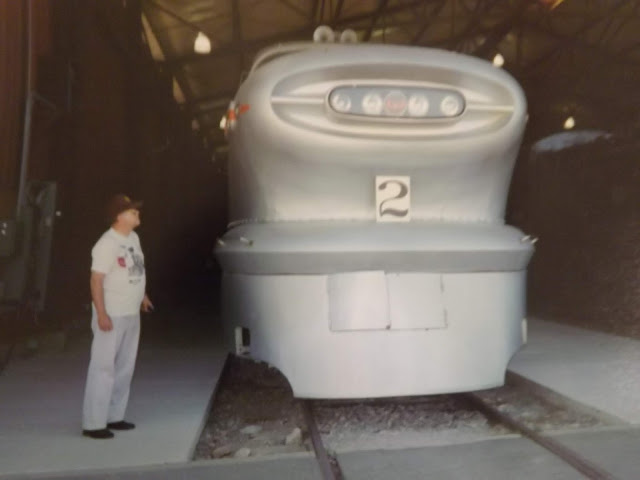 Norm leathers is seen viewing an actual Aerotrain at a railway museum in the states.
Posted by Paul Ullrich, WMRC Blog Editor at 7:00 AM No comments:

WinNtrak to display at Kildonan Place Shopping Centre this weekend

Those cute and cuddly guys at WinNtrak will be displaying all weekend at Kildonan Place Shopping Centre this weekend during regular mall hours. They'll be up an running their magnificent N gauge modular layout at the KP centre court from 9:30AM to 6:00PM on Saturday, January 12, and from 11:00AM to 6:00PM on Sunday, January 13. Kildonan Place Shopping Centre is located at 1555 regent avenue.
Posted by Paul Ullrich, WMRC Blog Editor at 6:00 AM No comments:

Next on tap we'll have Cliff Davidson will hold a clinic titled "The summer of 2018".  Cliff loves to rail fan and he did a lot of rail fanning last year. He will entertain us with just a few of the highlights of what he was able to catch at track side.

The meeting starts at 7:30PM on Friday, January 11, in the Tank Room at the Charleswood Legion, 6003 Roblin Boulevard. Wheelchair accessible. The canteen will be open, and we'll have a 50/50 draw and our monthly model display. Not a member? Not a problem! Guests are always warmly welcomed!