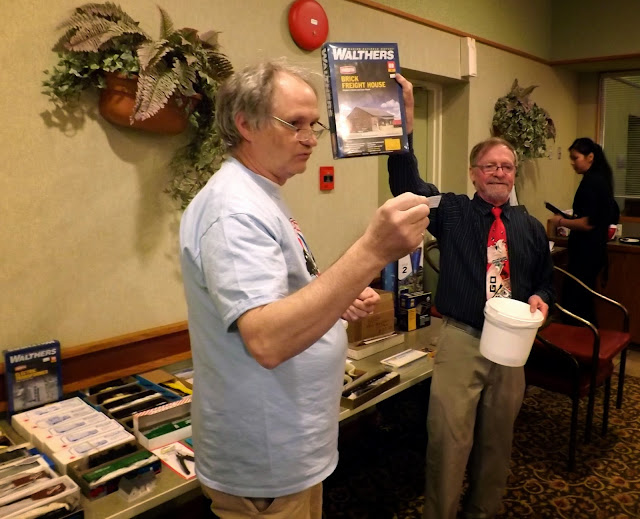 WMRC President Larry Leavens reads out the winning ticket number for the Walthers brick freight house that WMRC model contest chair is holding up. Check out the stash behind Larry! What a haul of model railroading goodies!

One of the best things about our annual banquet are prizes, prizes and more prizes! We first hold a raffle for several door prizes. Each person attending gets a ticket when they enter. The prizes not only include model railroad stuff, but several of what we call "non-rail" prizes, which include gift cards to such retailers as Home Depot!

Next comes the elimination draw. Tickets were sold for five dollars for the sole prize of a very nifty HO locomotive, fully equipped with DCC. But in the elimination draw, it's not the first ticket that wins - it's the last! Everyone had lots of fun watching ticket after ticket drawn, waiting in anticipation as to whose name was going to be on that very last ticket!

Our last draw used "arm's length" tickets. A roll of tickets were sold, the amount of tickets you received for five bucks was measured from the tips of your finger to the bridge of your nose when you turned your head. Yes, you could use a taller friend to substitute for you if you happened to be height challenged.

Just about everybody walked away with some sort of prize that night. Some had more prizes than others, but that's the luck of the draw! 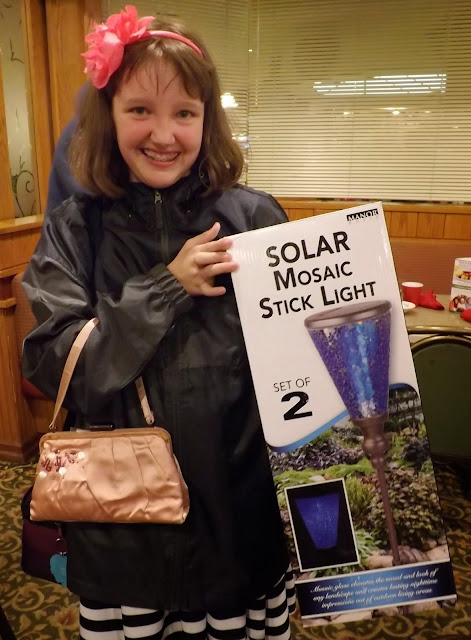 One of our youngest members, the lovely Frances South, won this solar mosaic stick light as a door prize. It's going to look just great in her parent's garden!
Posted by Paul Ullrich, WMRC Blog Editor at 7:54 AM