Churchill by rail: Part 10 - Back to Winnipeg! 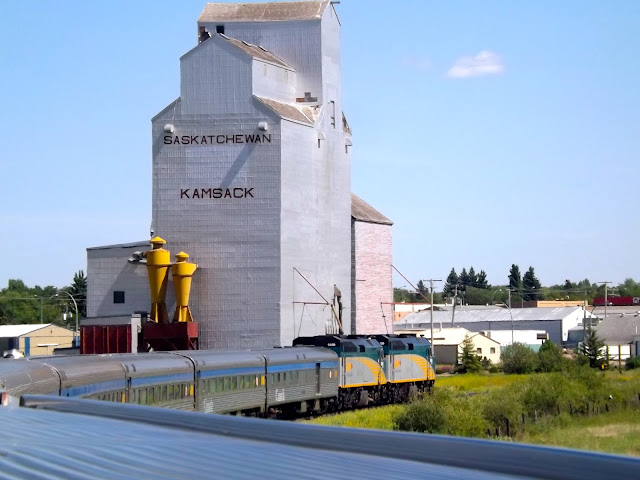 Our train makes a stop in beautiful downtown Kamsack, Saskatchewan.

After breakfast, we went back to the dome car, where I assumed my role as the unofficial conductor. I like to know where I am at all times, and that's not easy to do in the endless boreal forest of northern Manitoba. But I was armed with my Via Rail timetable, the Canadian Rail Travel Guide by Daryl Adair (that name sounds familiar) and my 1985 edition of Bill Coo's Scenic Rail Guide to Western Canada.

Bill Coo's Scenic Rail Guide to Western Canada is still a valuable resource for the rail traveler, but it has been out of print for 30 years, and it's a bit dated. For instance, it states that between mile 1214 and Gillam, you should watch for Indians carrying their children in moss bags.

Yeah, right. These days they're using baby carriers that the bought from The Northern Store like everyone else.

Using the mileposts with the two books and the timetable, I was able to calculate exactly where we were, and if we were on time or not. My fellow passengers, who also wanted to know where we were, helped me along, spotting mileposts along the way. We arrived late in Thompson, with barely enough time to leave the train and stretch our legs before we departed.

Via Rail had supplied the train with a lovely park car, but not with a park car attendant, so we were on our own in the back of the train with nothing but a carafe of coffee that the staff had left us.  But we discovered that the park car had untapped resources that made the trip a bit more tolerable. One of the staff opened up one of the cabinets in the park car and found some more coffee cup lids! A case of cookies was also discovered in another cabinet.

I washed up and shaved in the bathroom, still in The Pas. The light wasn't working, and the air conditioner was on full blast. As the train wasn't in motion, I was able to fill up the sink almost to the brim. When the train was moving, the best you could do was a couple of inches of water. Any more than that and the movement of the train caused the water to spill.

We went for breakfast, still in The Pas. As we ate, the train from Winnipeg rolled in, six hour late. This is why our train was held up in The Pas for so long. We finally got moving around 8:00.

There was much excitement in the Park car when we reached Saskatchewan, and the first field of canola was spotted. After several days of boreal forest, muskeg and The Barrens, it was a welcome sight. But if you're the type that gets excited over seeing a field of canola, then you've been in the prairies way too long!

We started out 5 1/2 hours late leaving The Pas. As we trundled through the prairies, we lost more and more time. I became the constant bearer of bad news as the rest of our group asked me how we were doing. When we had lunch, we found that the menu selection had become even smaller. We were back paralleling the highway again, and automobiles continued to zip past us.

We weren't supposed to have dinner on the train, as it was supposed to have arrived in Winnipeg at 4:45 PM. But the crew managed to rustle us up a meal. There were only two selections on the menu, but we were just grateful to be fed. We arrived in Dauphin seven hours late, but the train stayed there long enough for us to go outside for the first time since we left Thompson.

It was announced that we wouldn't arrive in Winnipeg until 1:00 AM, eight hours and 15 minutes late. But the railfans didn't mind, because that meant more time on the train!

We made the best of it by holding a little reception in the park for our two gracious and hard working tour guides, Robert and Deborah. We watched a beautiful, lingering sunset as the sun dipped near Riding Mountain National Park. We watched the moon rise and the stars come out as we approached Gladstone. The lights of Portage La Prairie were a welcoming sight, as it meant that we were almost home!

We pulled into Winnipeg exactly at 1:00 AM. Robert called for cabs as soon as we arrived, and when we exited the station there were about a dozen taxis waiting for us to take us home.

We arrived home safe and sound, but then we came down with colds, and so did a few others from our group. A friend of mine who lived in Thompson explained that we all must've contacted a "northern bug", and now that we've had it, we'd be now be immune.

A friend of mine took the train to Churchill last week. Her train was exactly 28 minutes late arriving in Churchill. The trip back was without incident. She even had warm, sunny weather and she didn't catch a cold!

Some people have all the luck! 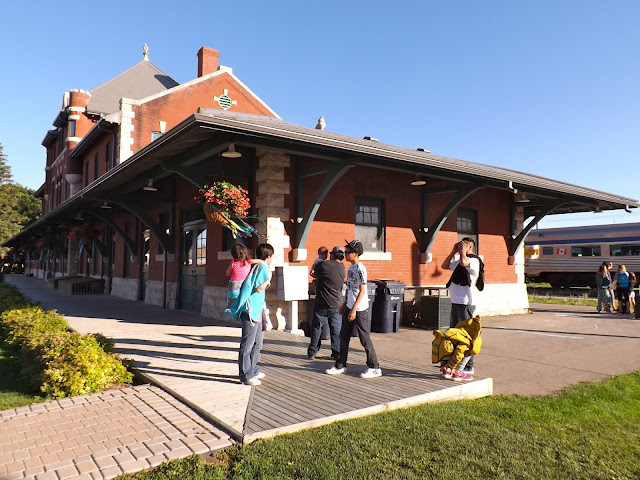 Passengers take a much needed 20 minute break in Dauphin. 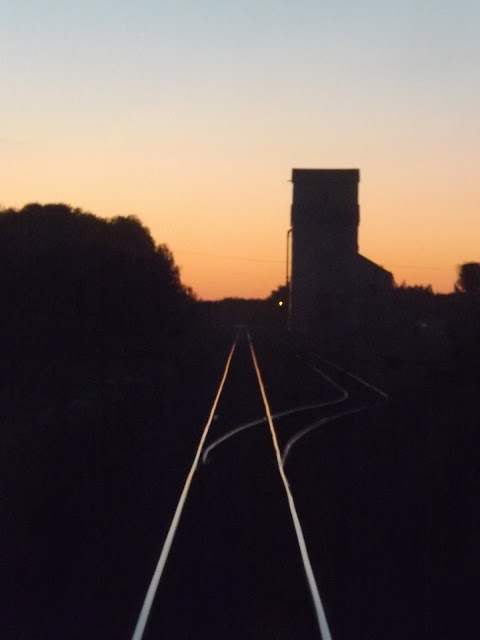 There's nothing more beautiful than a prairie sunset. This one was taken at Glenella.
Posted by Paul Ullrich, WMRC Blog Editor at 6:00 AM