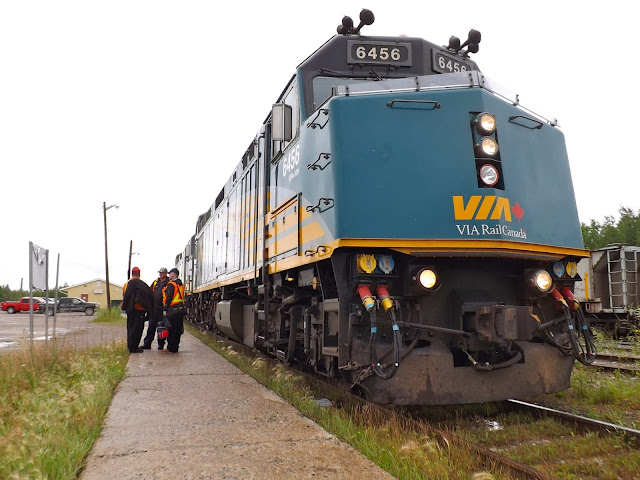 Our train arrive late in Thompson, and stays there for a very long time.

We awoke to a steady rain just outside of Cormorant Lake, north of The Pas. It had been raining all night, and it continued to rain until just before we reached Thompson Junction.

This was the land of no roads, no communities, no cell phone transmitters and certainly no wi-fi. We crossed highway 6 outside of Ponton, Manitoba, crossed highway 373 to Norway House north of Dunlop, and we ran parallel with highway 6 from Dunlop to Wabowden, but after that we were on our own in the wilderness of Manitoba's boreal forest. We passed Thicket Portage, which is where the Franklin expedition once stayed (not a good sign of things to come).

We were going a lot slower since we left The Pas. From the dome car you could see each car rise and fall as it rolled over the uneven roadbed. We reached Thompson Junction, confident that we'd cover the 30 miles from there to Thompson in no time.

No so! It took us 2 1/2 hours to get there, which means that we were hurtling down the track at a breakneck speed of 12 miles an hour! On the plus side, we were going slow enough to get some great shots of the Wintering River and the Grass River as we crossed over them.

The Via timetable lists Thompson as a five hour stop. I was wondering what we were going to do there for such a long time. But the train was several hours late arriving, so I thought that our stay would be brief.

The train from Churchill was waiting for us on the wye. When we pulled into the station, that train backed up behind us. Much to our surprise, we found three cars from the states waiting for our train. They had licence plates from Minnesota, Iowa, and California. The had obviously drove up from Winnipeg on highway 6 to meet the train at Thompson.

It's an eight hour drive from Winnipeg to Thompson. By train, it's 24 hours, assuming that it's on time. Highway 6 is a direct route through the Interlake. The Churchill train meanders through Saskatchewan, as Churchill is a grain port, and Saskatchewan is were the trains get the grain.

We were told that we'd be facing a delay due to a mandatory rest period for the crew, and that we'd be leaving Thompson at 1 AM.  A few of us decided to walk to Thompson for a snack run. Just outside of Wal-Mart, a native man and his family leaving the store noticed our name tags and stopped us.

"I guess you're stuck here for a while because of the washout, right?" He asked.

He was telling the truth. When we got back to the train, it was confirmed that there was indeed a washout north on the line. Due to the heavy rains, a beaver dam had been breeched, which washed out part of the track. We were then told that we'd be staying on the train in Thompson overnight, and that we'd be flown out to Churchill the next morning.

Damn those pesky Canadian rodents, and their shoddy construction techniques.

The crew also told us that they'd be going into town for some supplies for the next day. Despite the news about the delay, we were all in good spirits, and we even had a get-together in the observation car that evening. Being in Thompson also meant that folks carrying cell phones could once again get a signal. That's when we found that the story of our washout made the news!

We went to bed that night on the train, looking forward to a better night's sleep after rocking and rolling through the bush the previous night. We slept peacefully, fully confident that Via Rail would take care of all of our troubles and get us to Churchill swiftly.

Boy, were we ever in for a surprise! 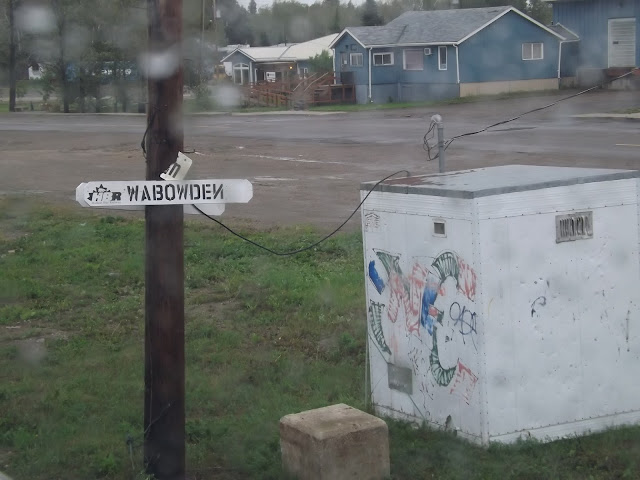 Hey, sign painter - you had one job! Couldn't you face that "N" the right way? 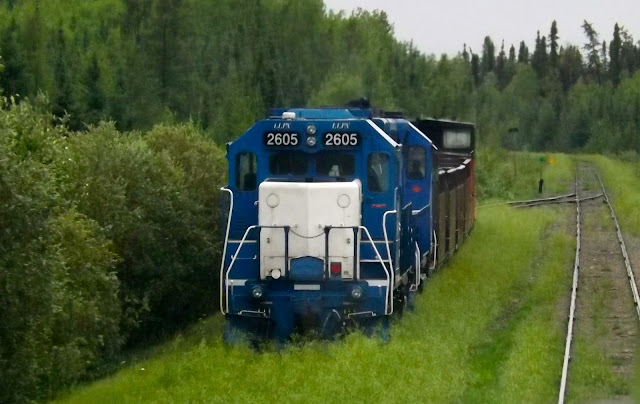 Uh, there is track under that train, right? Exactly how long has that train been at that siding? 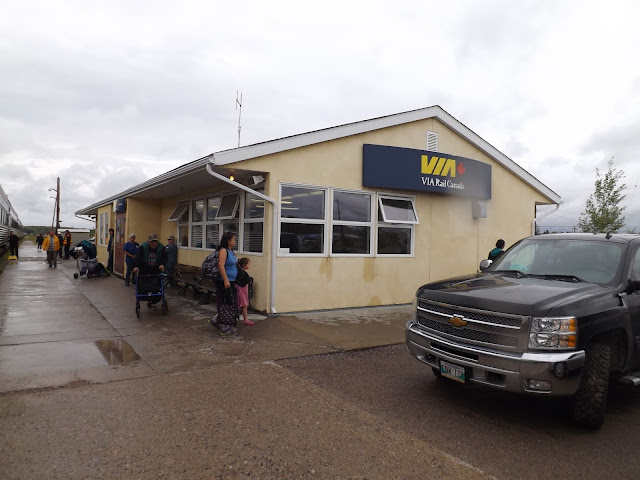 Thompson station - our home away from home for the next 24 hours.


Posted by Paul Ullrich, WMRC Blog Editor at 7:00 AM