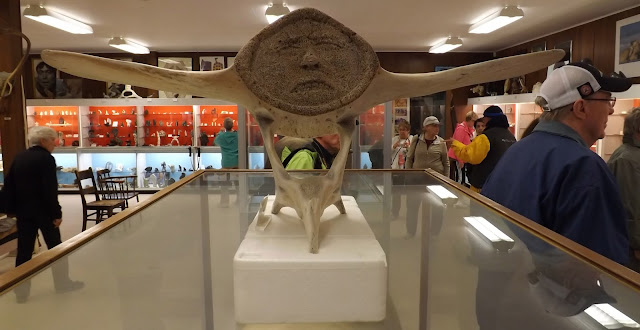 One of the more unusual Inuit sculptures at the Eskimo Museum in Churchill.
By Paul Ullrich

Our last day at Churchill was a mixed bag of sightseeing. We were supposed to go on a hike in the boreal forest, but it was raining, so the hike became a bus tour. Most of our group, already tired from being on our feet for most of the day yesterday, were grateful for that.

Our guide Paul, who tied his beard just like Albus Dumbledore, took the wheel of his school bus with the gun rack as we headed out to the hinterlands of Churchill. He told us that Churchill "Has 50 miles of road and 13 streets - you can't get lost. and there's no place to hide!"

The first sight we saw was a polar bear relaxing just off the road. Paul explained that this bear and his buddies had just finished eating a beached beluga whale, so there was no danger of him stalking any of us for a quick snack. Still, we all proceeded wit caution as we stayed close to the bus and used our telephoto lenses at a very safe distance. As his belly was full of fresh beluga, he didn't pay any attention to us at all.

Paul then showed us a polar bear trap that he made. It was a wedge-like structure made of old railroad ties with a braided wire snare inside of it. To catch a polar bear, all you needed to do was to throw a couple of sardines into the narrow part of the wedge. The bear, attracted to the scent, would get entangled in the snare. As polar bears are an endangered species, they are not killed if trapped. They're anesthetized, tagged, and then released. We also drove by Churchill's polar bear prison, where stray bears who wander into town are incarcerated and shipped out to less inhabited areas.

We were taken to Churchill's abandoned rocket research range, home of Manitoba's Black Brant rocket, built by Bristol Aerospace of Winnipeg. Hanging from the ceiling inside one of the buildings was of a heat jackets used to keep the rockets warm until launch. These missiles used solid fuel (which meant that they were really nothing more than giant roman candles) which required a heat jacket.

We also saw Churchill's Miss Piggy, which is not the beloved character from the Muppets, but a slow moving, ungainly aircraft which belly flopped onto a rock ledge shortly after take-off. Miss Piggy was a C-46 Curtiss Commando, which was very similar to the Douglas DC-3 passenger aircraft.

In 1979 this plane, which was already well past its prime, was flying a cargo of soda and a snowmobile when it lost oil pressure. Its rear landing gear caught onto wires on some hydro poles and crash landed onto the rocks without a fatality, and it's been there ever since.

We ended our tour with a visit to Churchill's Eskimo Museum. Run by the Diocese of Churchill, it has one of the oldest and most comprehensive collection of Inuit artifacts and sculptures in Canada. Also on display were well preserved hide-covered kayaks, narwhal horns, a stuffed musk ox, polar bear and a walrus.

Their gift shop has a great selection of the most reasonably priced souvenirs in Churchill, and for that reason alone it is definitely worth a visit!

After our visit to the museum we returned to the Seaport Hotel for a delicious farewell supper before we boarded the train. Everyone raved at how good the ribs were! Who knew that you could find a decent rack of ribs this far north? However, pork isn't locally bred in Churchill. Someone tried it, and the found out all too soon that polar bears have a taste for pork!

When we finished our meal, we gathered our belongings and headed for the train station. Guess what! The train left on time, right at 7:30 PM! 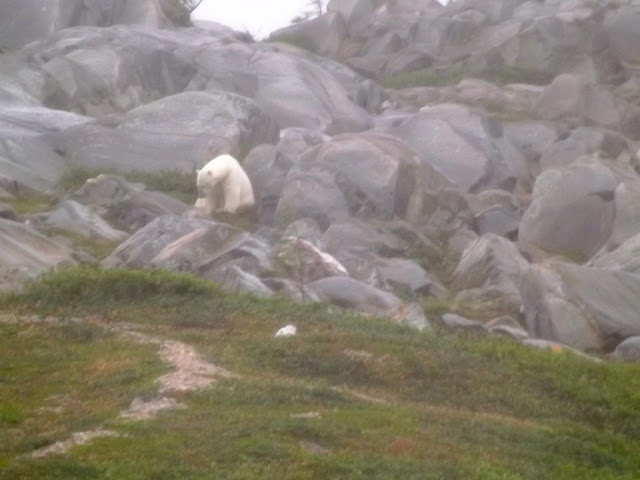 This is as close as any of us wanted to get to a polar bear in the wild. 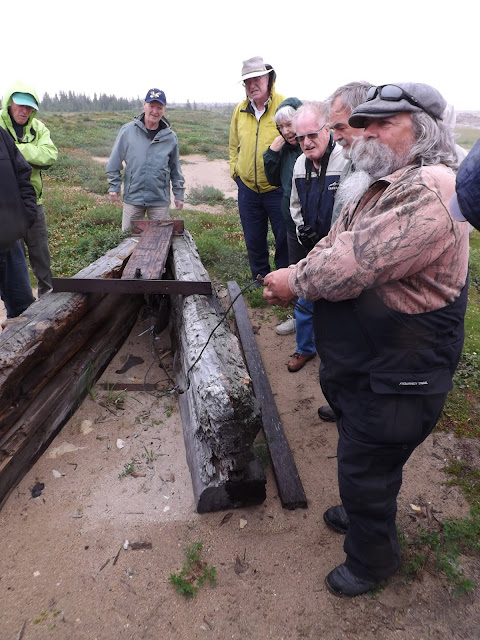 Our guide shows us the proper way to snare a polar bear in a trap. 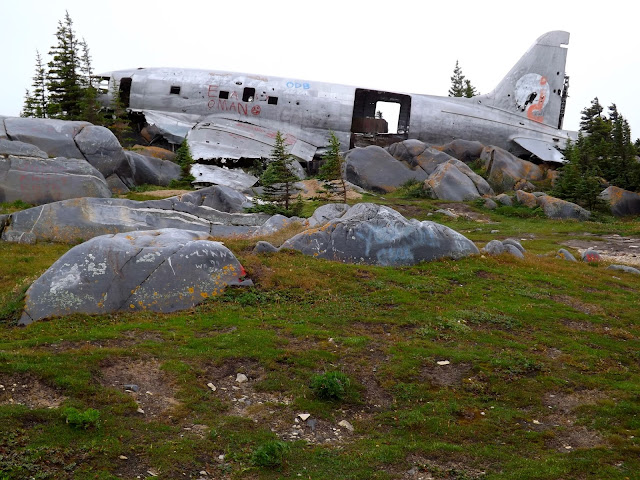 Here lies Miss Piggy, the airplane that belly flopped onto the rocks 36 years ago. 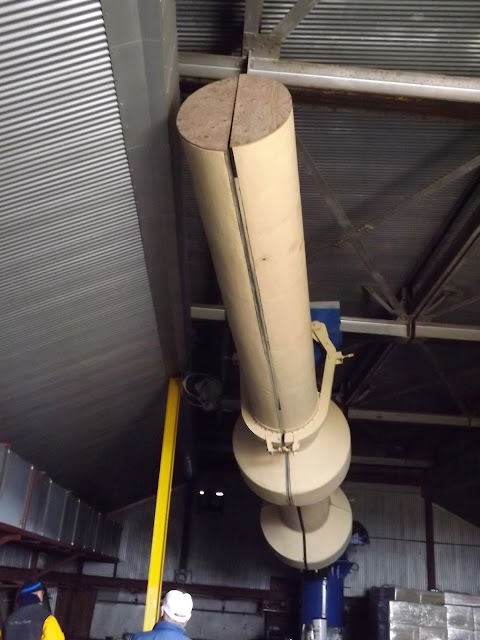 A heat "jackets" used to keep the rocket warm until launch.  The solid fuel required that.  It hangs inside one of the abandoned buildings on the site of Churchill's rocket research range.

Posted by Paul Ullrich, WMRC Blog Editor at 6:30 AM