Churchill by rail: Part 9 - A troubled journey through The Barrens and beyond 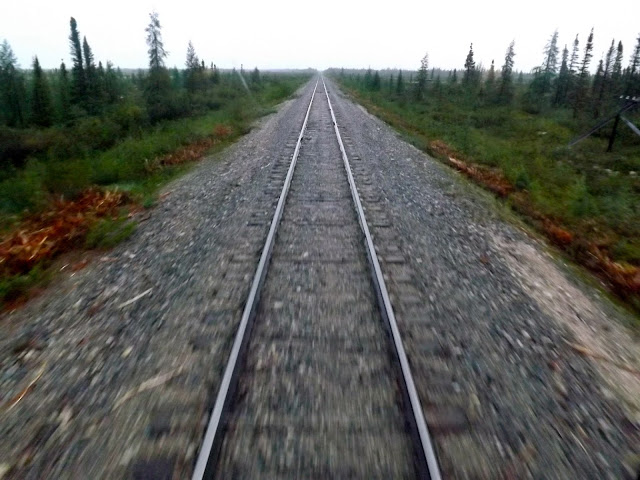 There's a whole lot of nothing in The Barrens, just south of Churchill.

We were all in a celebratory mood as we left Churchill. Our group held another get together in the park car, reminiscing about all the good time we had as we traveled through The Barrens.

The Barrens is perhaps the bleakest part of the country I've ever seen. The land is so flat that it makes southeastern Saskatchewan look like the Rocky Mountains. There's nothing but arctic moss, stunted trees and shallow ponds spreading beyond the horizon.

There's a well known Canadian book by Farley Mowat called Lost in The Barrens, which was made into a motion picture in 1990. Now that I've been through The Barrens, I don't see how anyone could get lost there! Remember the old joke about the prairies (which was used in the opening theme for Corner Gas) where they say that if your dog runs away you can watch him go for three days? If that happened in The Barrens, you could watch him run for a month!

Those stunted trees don't look like much, but they're very, very old. Things grow slow in permafrost, and those tiny pines are somewhere around 50 to 100 years old! I have a guide book that says that The Barrens goes on for only 40 miles, but there's not much of a transition in scenery when you finally leave it.

We bedded down for the night, still traveling through The Barrens. That's when we received the first signs of a troubled journey.

Our sleeping car attendant handed us our towel bags, then asked us to ration our towels, as they were such short supply that we wouldn't be getting another towel bag like we usually would get on our  second day. I reached up to pull down the window shade on my lower berth, and discovered that it was missing. This meant that I was going to be awoken by the dawn's early light whether I wanted or not for the next two nights.

I awoke well past Gillam, once again in the familiar boreal forest. After we had breakfast, I ordered a coffee to go. When the server brought me the cup, she said, "You might want to hold on to the lid. It's the last one we got. Everything's in short supply on this train!"

I took her advice and held onto that lid for dear life until we reached Winnipeg. Had I wanted to, I might've been able to sell it for five bucks on that train!

Things went from bad to worse after that. The sleeper next to us had no hot water, which meant that we had to share the shower. Another sleeper's septic tanks were completely full, which left the car with a very unpleasant door. The attendant kept spraying air freshener throughout the car, which helped for about ten minutes.

I knew that the Churchill train is not one of Via's crack trains, and that I shouldn't expect the same level of service that they have on their other two trains with sleepers, The Canadian and The Ocean.  The Canadian has tablecloths. The Churchill train does not. The Canadian doesn't serve coffee in paper cups.  The Canadian has a new menu ever day. On the Churchill train, we joked that everyone had memorized the menu after the first day, as the selection was always the same.  But setting out with a shortage of supplies, and hot water in one car and a full septic tank in another, especially when you are literally in the middle of nowhere, is not only inexcusable, but a bit frightening. 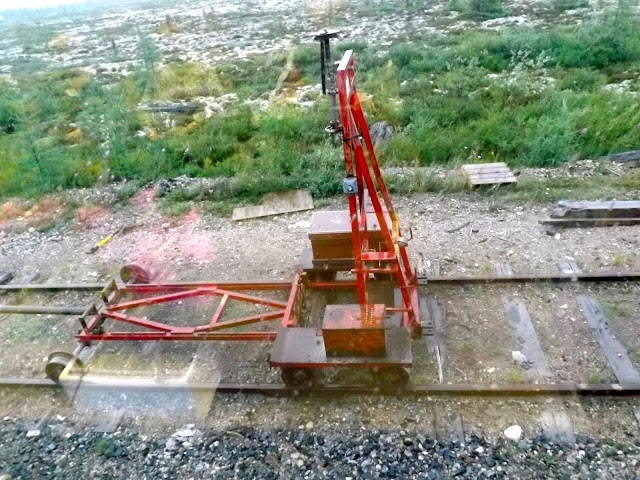 An interesting bit of equipment on a siding in The Barrens. Anyone know what it is?
Posted by Paul Ullrich, WMRC Blog Editor at 12:00 AM