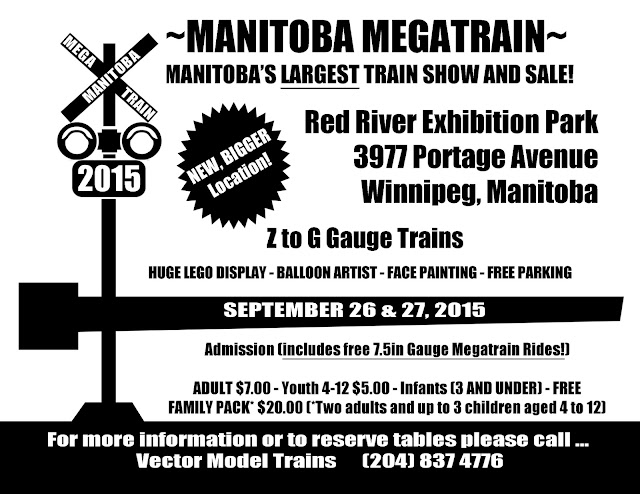 This is the big one, folks! The big Kahuna! The biggest and the greatest train show of the year! And it's this weekend, at a new location! Yes, it's the annual Manitoba Mega Train Show at Red River Exhibition Park!

There will be 17 layouts, 9 different displays and over 40 vendors!  They're pretty close to filling up the new location! The WMRC will be there in full force, volunteering, displaying and running the Mega Train itself!

In case you haven't been there before, here's how to get there:

At the first set of lights just west of the Perimeter turn into Assiniboia Downs. Go past the new MTS IcePlex and into the Downs parking lot.  Just as you enter, there is a building on the left in a fenced in area.  It has a sign that says Red River Exhibition Place. Manitoba Mega Train should be on the sign as well. For those coming from the West, the lights are the last ones you hit just before the perimeter. Entrance will be Gate #2.   For those coming around the North Perimeter, you can access the Downs right off the Perimeter.

The times are from 9 to 5 on both Saturday and Sunday, and there's plenty of free parking for all!