Churchill by rail - Part one 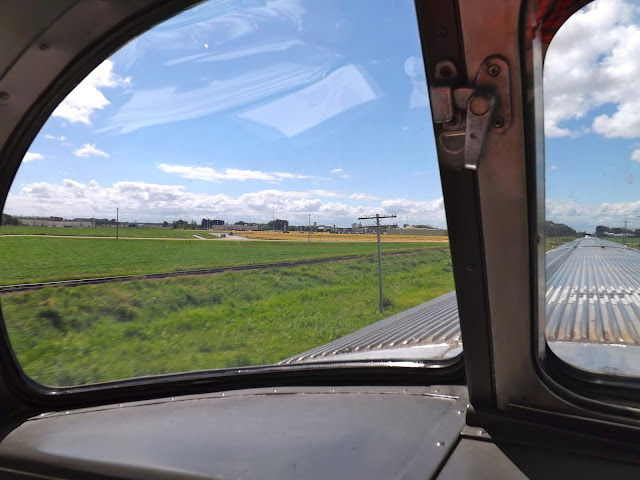 A superb view of the prairie taken from the dome car on the train to Churchill.

This year my wife Margaret and I decided to go whale watching in Churchill, a destination on our bucket list. Being a railfan, I had always wanted to travel there by train. I also wanted to see what northern Manitoba was like, as the farthest north either Margaret and I had ever been in the province was Duck Mountain Provincial Park.

We signed up for the History and belugas of Churchill group tour offered by Rail Travel Tours, which is run by long time WMRC member Daryl Adair. We opted for the upper and lower berths on the train. Not only are they the least expensive sleeping option, but they have the biggest beds, and they're more sociable than being locked away in a room, or in a roomette.

There was a horrendous rainstorm on the morning of our departure, which was so bad that we had our doubts about even getting to Union Station. But 15 minutes before were about to leave, the rain stopped! We were grateful for that, but what we didn't know was that the rain was going to play a significant part in our adventure to Churchill.

We arrived at the station in time to have our luggage checked and to join Daryl's tour of the Winnipeg Railway Museum. Daryl gave a very enjoyable and thorough tour. He's a long time member of the museum, and he knew every piece of rolling stock in the museum inside and out.

The only problem was the heat. Remember that morning's rain? After that downpour, the temperature climbed rapidly, and with all of that extra added humidity, the museum turned into a sauna. It was well before noon when our tour ended, but by the time it was finished we were all dripping with sweat.

When we got back downstairs to the station, we found that the train was running late, as it didn't arrive in Winnipeg until 7:00 that morning (over 14 hours late) and the crew needed more time to get the train ready. Lunch in the car's diner was cancelled, but Via supplied us with a lunch from the snack bar in the station's main foyer.

The train was ready for boarding quicker than anticipated, and we boarded right after we ate. Before we left, Daryl cautioned us about the schedule of the Churchill train.

"It's supposed to arrive in Churchill at 9 AM, but if it arrives on the same day, it's considered to be on time!" He said. And he was right about that.

Our guides for the trip were Robert and his wife Deborah, and they were absolutely terrific hosts. Much to our surprise, we found that most of the tour group were from Manitoba. When we booked the tour, Daryl told us that most of his customers for this trip were usually out-of-towners. He said that in Churchill they refer to this as 'perimeter-itis", reflecting on Winnipegger's well known reluctance to vacation in their own province. But it was a welcome surprise, as we got to know a lot of great people who lived nearby.

Wonder of wonders, the train had an domed observation car! The dome car has been featured this summer on a number of trips on the Churchill service as a pilot project. The domes were also featured a few years back during polar bear season in the fall and at the odd time for special groups. Boy, was it ever popular! It gave us the perfect place for our group to get to know each other, and to enjoy the scenery as no other passengers on the train to Churchill had ever been able to before.

After a hot, humid morning in the station, it was a blessed relief to travel in air conditioned comfort. I was giddy in anticipation as we left Portage La Prairie for the Gladstone subdivision, for it was a route that I'd never travelled before by rail. We weren't breaking any speed records. It was a bit disconcerting to see cars zipping by us on the road next to us, but none of us cared - we were in the dome car, it was a beautiful sunny day, and we were all having a wonderful time!

We went through Gladstone, which I had only seen from Highway 16. The track through town was elevated, and everybody laughed when we passed mere inches away from the second floor window of a Chinese restaurant! If our windows had been able to open, we all could've got some take out!

We had a wonderful dinner in the diner as we slipped through the Togo subdivision, then crossed the border to Saskatchewan and into the Assiniboine subdivision. We went to bed when we reached Hudson Bay, Saskatchewan, looking forward to what the next day was going to bring.

But the next day was full of surprises that no one had anticipated. 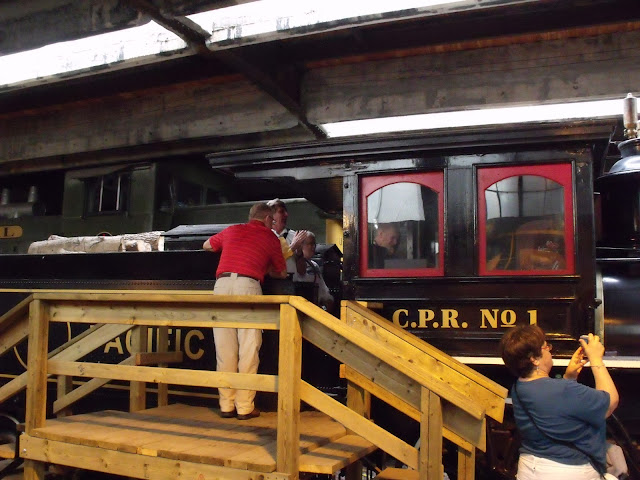 A tour of the Winnipeg Railway Museum was included as part of the travel package.
Photo by Margaret Ullrich. 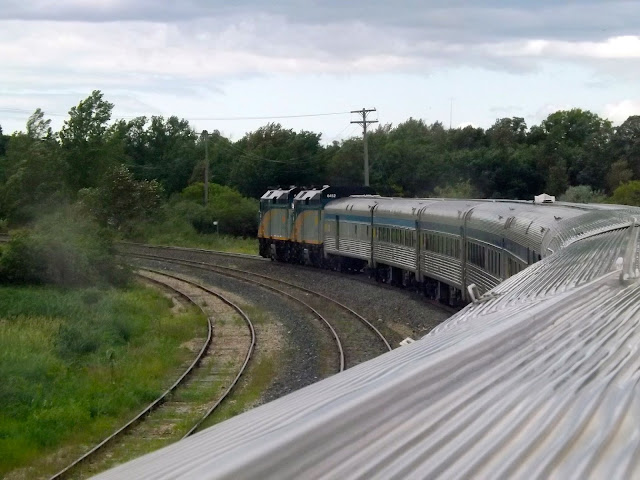 The train rounds a curve through a heavily wooded area outside of Gladstone, Manitoba. 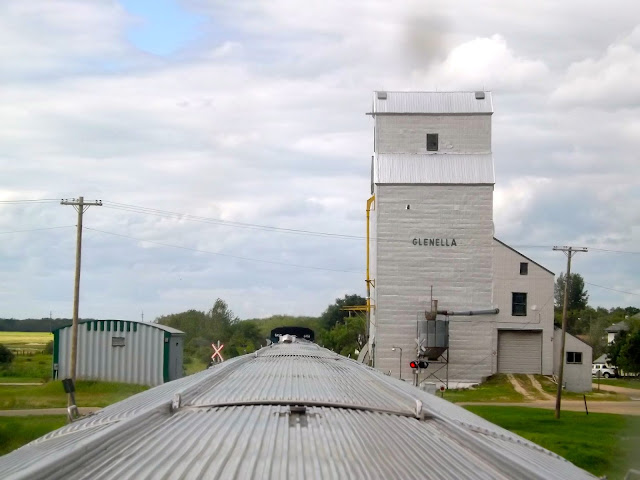 The train arrives at Glenella, Manitoba, just before Dauphin.

Posted by Paul Ullrich, WMRC Blog Editor at 10:00 AM