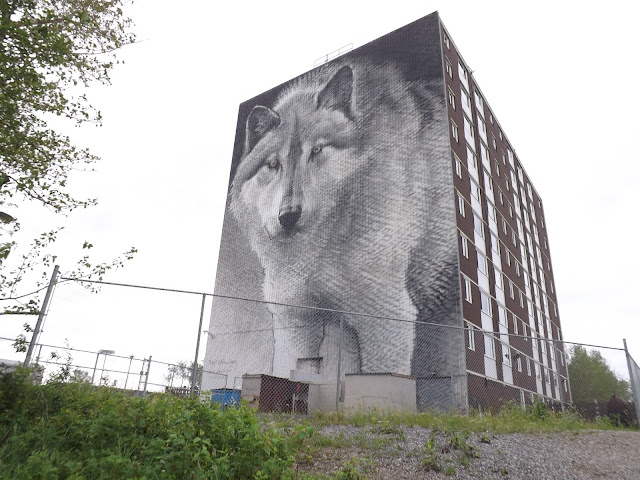 We passed the time taking photos the wolf mural in Thompson, Manitoba, while waiting for our flight.

After a pleasant sleep in a non-moving sleeper car, we woke up the next morning and found out our proposed schedule for the day.

We were told that we were to board a bus at 1:30 PM, which would take us to the airport. If we wanted to go into Thompson, we were asked to be back at no later then 12:00 noon for lunch, so we'd have enough time eat and to prepare for boarding the bus with all of our belongings.

To make our wait more pleasurable, Via ordered dozens of donuts, pastries and muffins from Tim Horton's, along with gallons of coffee, and had them placed in the station for all the passengers.

When we first arrived in Thompson, a member of our group had checked the fuel gauge on the head end unit. He checked it this morning, and found that the engine had gone through 700 litres of fuel, just to keep the train's services going!

A group of us took advantage of the time and visited the Heritage North Museum and Information Centre. This is a wonderful little museum housed inside a log cabin, and it's just packed with many fascinating displays about Thompson's history and wildlife. We also posed in front of the Wolf Mural, which is a Robert Bateman design painted by Winnipeg's prominent mural painter, Charles Johnson. It's painted on the side of the Highland Tower, a 10 story apartment block.

We got back in time for lunch in the diner car. There were usually five selections for lunch, but this time we only had two. Robert, our tour guide, announced that the plane that was chartered couldn't fit all of our group. He asked for eight volunteers who wouldn't mind flying on a later plane, then passed a sign-up sheet around.

After lunch, we packed up our belongings. We could see the Greyhound Bus waiting for us behind the station. At 1:25 we all left our quarters and waited in line to disembark from the train. Ten minutes later, we were told to go back to our seats.

More muffins were brought from Tim's as a series of frantic phone calls to Via's head office in Montreal, Hudson Bay Railway, Rail Travel Tours, Calm Air, and Perimeter Airlines. We were allowed to leave the train, but not the station.

Amid all of this confusion, we met an 85 year old woman with a delightfully lilting Scottish accent who took the new of our delay with an enviable calm. She had lived in Churchill for many years, and had taken this train often enough to expect any sort of misfortune to befall her.

"You don't know how lucky you are, dear." She said. "This delay happened in a city.  It could've occurred in the bush, and then what would would've become of us?"

We felt a bit better after hearing that.

Finally, at 5:00 PM, we were told to get our luggage from the baggage car and board the bus. Being in a tour group had its advantages, for we were the first to leave. The passengers who were not in our tour group stayed overnight in a Thompson hotel, and were flown into Churchill the following day.

One plane was waiting for us at the airport. It was a 16 seater from Perimeter airlines. We were told that another plane would be there in just a few minutes to take the rest of us to Churchill. 16 people from our group boarded the plane. It was so cramped that you couldn't stand up straight. Little packets were handed out. They looked like gummy bears. They were actually earplugs.

The plane took off at 5:50 PM. As soon as it left, the airport manager announced that the next plane would be here at 7:30 PM.

So much for "the next plane will be here in a few minutes".

Thompson airport is like no other airport in the south of the country. The secure area's door was left open so passengers could get coffee and snacks. There was a sign in the washroom cautioning us not to drink the water, as it wasn't potable. The luggage scanner was an old woman with a cane who closed up shop promptly at 6:00 PM. We had no luggage inspection whatsoever. All they did was weigh and tag our luggage.

There was a Transport Canada sign by the baggage counter listing the things you couldn't bring on a plane. One of them was an aerosol can. I had a can of shave cream in my toiletry bag in my carry on. When I asked the clerk what I should do with it, she shrugged and giggled and said, "I don't know!"

The one thing the took seriously was take-out food brought into the planes. Boxes of donuts were subject to inspection by airport officials because they had several incidents where marijuana was smuggled inside of them.

The airport manager ordered a pizza for supper. Several members of our group did the same. He offered to pick it up so we wouldn't have to pay the delivery fee. That's Thompson airport for you.

The Calm Air plane arrived on time. It was a spacious 44 seater, and you could stand up in it! They even had snacks! We arrive in Churchill exactly at 9:00 PM, exactly 12 hours later than we were supposed to arrive.

We were greeted at the Airport by Paul, our guide for the next 48 hours. He looked like a cross between Grizzly Adams and Dumbledore. The school bus that he drove to take us us to our hotel had a gun rack with a very large an menacing looking rifle. We weren't in the south anymore.

Dinner, and the rest of our party, were waiting for us at the Seaport Hotel. We celebrated our arrival by having a delicious meal of fresh Arctic Char. 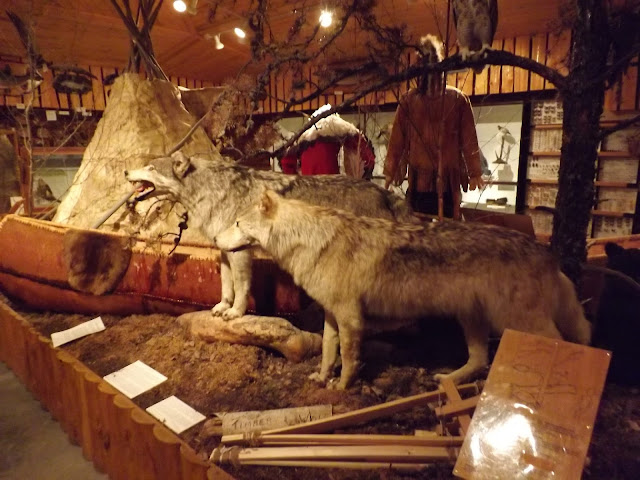 One of the displays at the Heritage North Museum and Information Centre in Thompson. 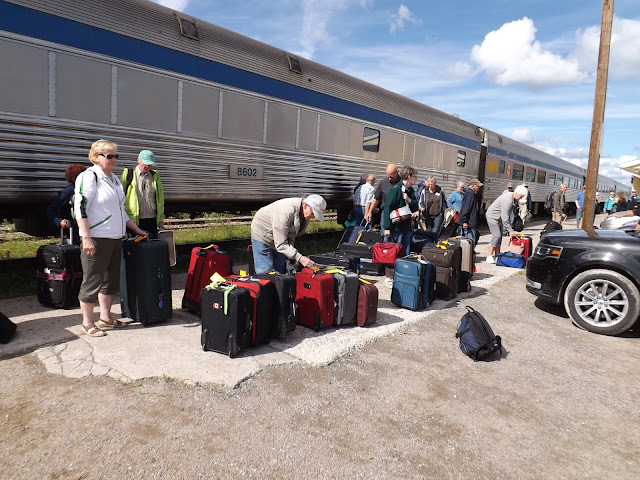 Taking our checked baggage from the train to the bus. We're finally leaving Thompson! 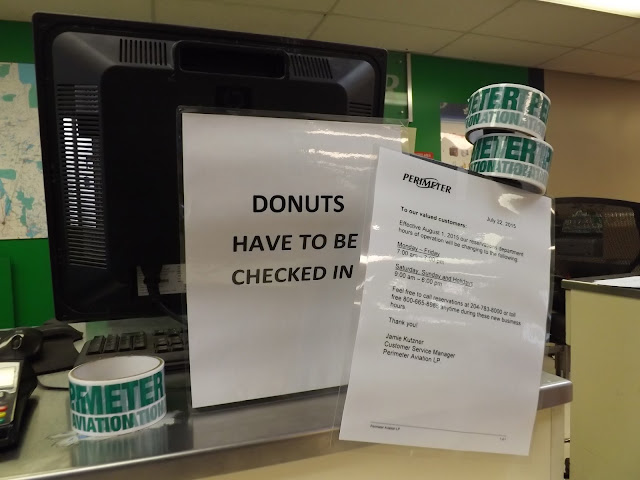 Yes, they were very serious about those donuts! 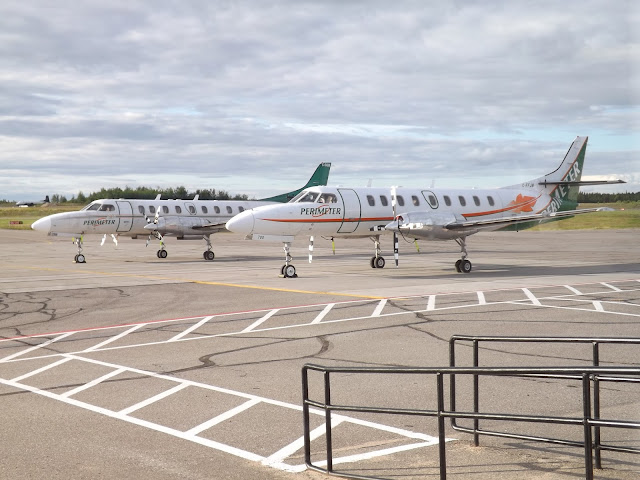 That's the 16 seater from Perimeter Airlines that took some of our group to Churchill. 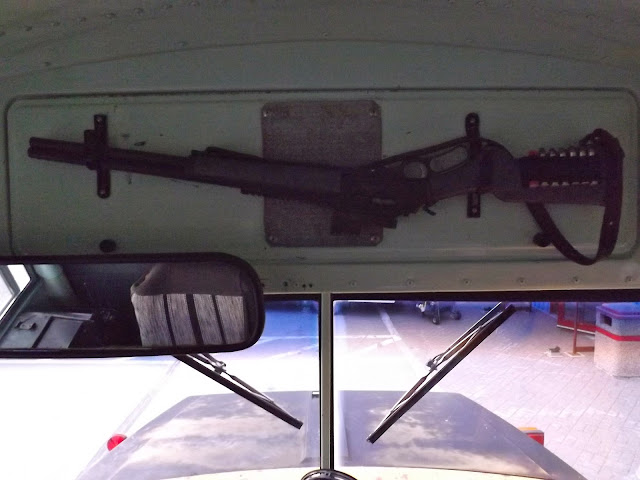 That's the rifle mounted on a gun rack in the school bus that took us to our hotel.


Posted by Paul Ullrich, WMRC Blog Editor at 7:00 AM