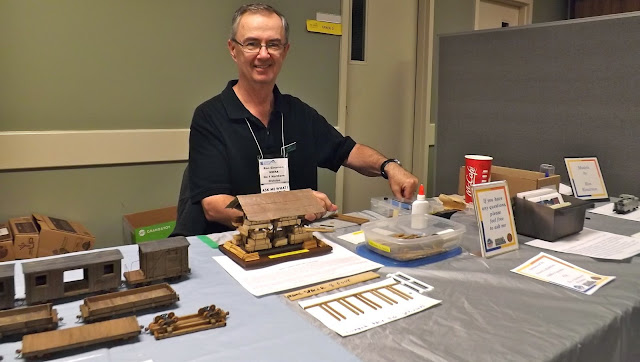 Ron Einarson, seen here displaying at the No. 1 Northern Division's annual train meet in 2015, has just been named Master Model Railroader by the NMRA.

Ron is MMR #593. The title of MMR will follow after his name at all NMRA functions and any written material about him. The NMRA presently has over 18,000 members, and in it's entire history there has been only 593 MMR certificates awarded, so this is a rare honour indeed!

The MMR is an achievement program, and each applicant must earn a series of seven certificates for their work before they receive the title. Ron has worked very hard to earn this title, and his modelling work has always spoken for itself. Way to go, Ron!
Posted by Paul Ullrich, WMRC Blog Editor at 7:29 AM


Send us an email and we'll send you an application form!
If you don't live in Manitoba, you can still join by being an associate member for only $15 CDN. You'll get a PDF of our official publication, The Lantern, emailed to you nine times a year!