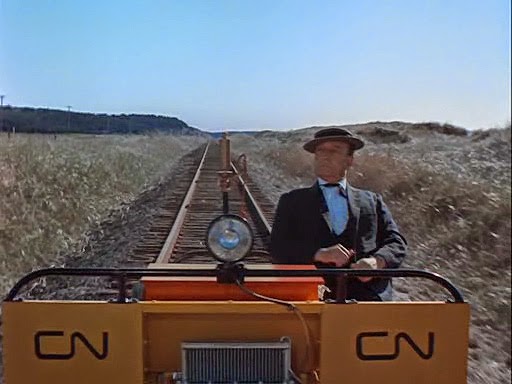 In 1965 the National Film Board of Canada released a short film featuring legendary silent movie comedian Buster Keaton, titled The Railrodder. Buster travels across the entire country from Lawrencetown, Nova Scotia to the Georgia Strait in a CN speeder.

This was one of the last Films Buster Keaton ever made, and it was a fitting ending, as one of his most famous films was The General, where he rescues a train stolen by the Union Army during the civil war.

The Railrodder is a delight not only for Buster Keaton fans, but for rail fans and historians alike, for it gives us a rare glimpse into what Canada looked like in the mid 1960's all from the perspective of an open speeder.

If you have 24 minutes to spare, sit back an click here to see The Railrodder.
Posted by Paul Ullrich, WMRC Blog Editor at 7:49 AM