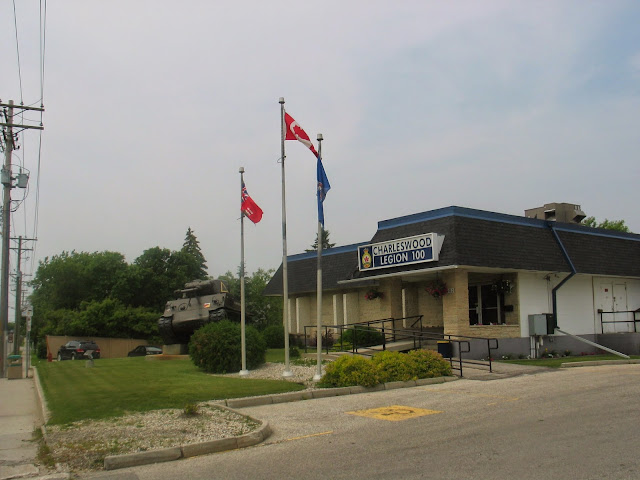 See this place? Don't go there this Friday, unless you want to vote.

The WMRC has moved the date of their next meeting from October 9 to October 16. This is because the Charleswood Legion is being used by Elections Canada for advance polling this Friday and all of this weekend.

After two back-to-back whirlwind weekends of trains at Railway Days and Mega Train, we can settle back and enjoy two terrific programs at our next meeting.  Paul Newsome from the Vintage Locomotive Society will give us a presentation on the two G5 steam locomotives that were recently delivered to the Prairie Dog Central last month. Paul was instrumental in arranging the logistics and move from Virginia to Winnipeg, and he has a very good presentation showing how the locomotives and their tenders were taken from their flat decks and on to the rails.

And now for something completely different! During Mega Train, Larry Leavens and Suzanne Lemon chatted with former WMRC member and past president Terry Penner. They discovered that he and a friend have formed a band called The Audayo Brothers that played all summer long on the Prairie Dog! They quickly made arrangements to have them appear for us at the October meeting. And yes, they play a few train songs. You won't want to miss this meeting!
Posted by Paul Ullrich, WMRC Blog Editor at 7:25 AM