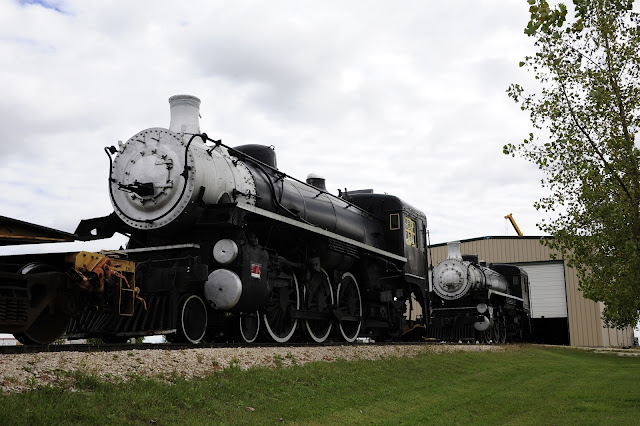 Paul Newsome from the Vintage Locomotive Society will give us a presentation on the two G5 steam locomotives that were recently delivered to the Prairie Dog Central last month. Paul was instrumental in arranging the logistics and move from Virginia to Winnipeg, and he has a very good presentation showing how the locomotives and their tenders were taken from their flat decks and on to the rails.

Then we'll have something completely different! Former WMRC member and past president Terry Penner and a friend of his has formed a band called The Audayo Brothers, which has played all summer long on the Prairie Dog Central! They will appear for us at the October meeting. And yes, they will play a few train songs. You won't want to miss this meeting!

The fun starts at 7:30 at the Charleswood Legion ,which is located at 6003 Roblin Boulevard. The canteen will be open, and we'll be holding the ever popular 50-50 draw and the monthly model display.

If you've been modelling anything, by all means bring it down! Each entry must include your name and a short write up describing the work that has been accomplished to date. Each entrant will have but one entry for the monthly prize of a $15 voucher from a local hobby store.
Posted by Paul Ullrich, WMRC Blog Editor at 6:00 AM