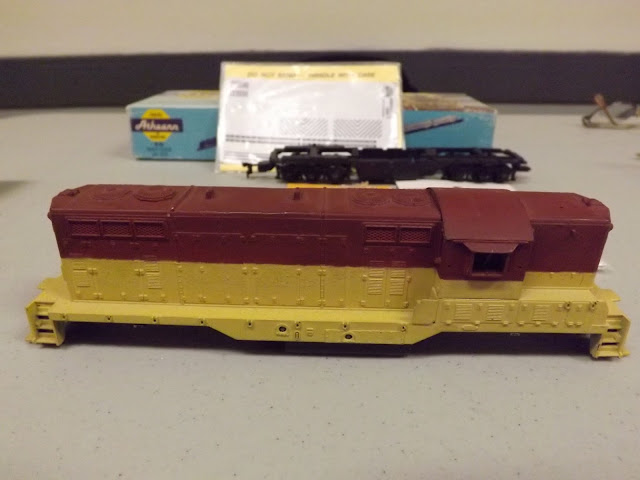 With the WMRC annual model contest deadline looming, contest chair Morgan Turney has "shake-a-box" fever! For the club's monthly model display in March, he brought in this Athearn undecorated GP-7, which he's decorating in the colours of his beloved TH&B railway.

He's been building "shake-a-box" kits at a frantic pace, while his iPod plays a continuous loop of  "Shakin' all Over", "Shake it up Baby", "Shake, Rattle and Roll", and both the Sam Cooke and Otis Redding versions of "Shake". Every one in a while he stops to nourish himself with a plate of Shake N' Bake chicken, washed down with (wait for it) a milk shake!

He's so dedicated to "shake-a-box" kits that he takes real to run cars, removes their protective packaging, puts them back in the box and shakes them just so he can put back together all the broken pieces!

But seriously, folks - the special event for our annual model contest is to construct a "shake-a-box" kit, and you'll get an extra ten points if you include the 60th anniversary WMRC decal somewhere on the kit. We also have other contest categories, such as steam locomotives, diesels and others, passenger cars, freight cars, non-revenue, structures and displays. So be sure to bring your models down to the Tank Room at the Charleswood Legion on Friday, April 1, after 6:00PM!  And don't forget your paperwork!
Posted by Paul Ullrich, WMRC Blog Editor at 10:57 AM