A salute to the volunteers, exhibitors and vendors of the Manitoba Mega Train Show 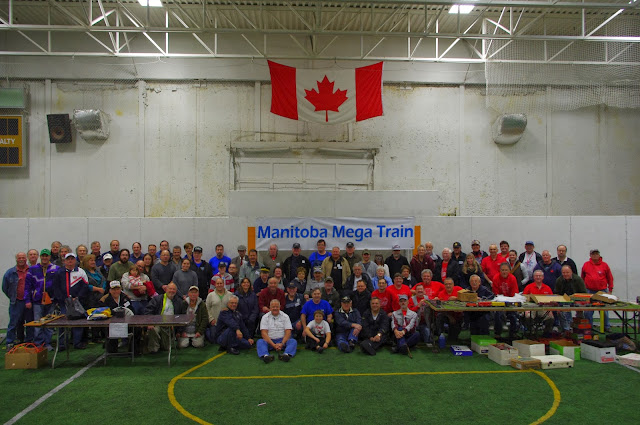 How many people does it take to create the most successful train show in Manitoba?
Well, this many!

Those who were there when this photo was taken will fondly recall how Susan Dorge had to keep moving further and further back to get us all in the frame!

Make no mistake about it - it was volunteers who made this show run. Members of the Winnipeg Model Railroad Club were there front and centre for the Friday set-up, manning the admissions desks, and for the Sunday evening take-down. You haven't lived until you've assembled sectional track for the 7 1/2" gauge Mega-Train!

Next year the show will be held a little earlier, on September 27 and 28. Hopefully it will be a bit warmer than it was for the 2013 show!

Volunteers will still be needed, of course, especially for the Sunday evening take-down. The show may be over at 5:00 PM on Sunday, but there's still plenty of work to be done after that, and the more volunteers we have, the faster we'll all get out of there.

For more information about the Manitoba Mega Train Show, go to:
http://www.vectorgardentrains.ca/Mega-Train.page

There's also a new video of the 2013 Manitoba Mega Train Show on You Tube:
http://www.youtube.com/watch?v=E_fPf2bnfIc
You'll see a lot of great trains and great layouts. You'll see a lot of familiar faces, too!
You might even spot yourself!
Posted by Paul Ullrich, WMRC Blog Editor at 11:11 AM