Christmas won't be the same without Bill Taylor 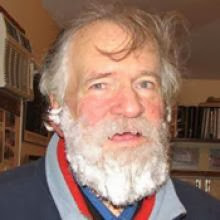 Bill Taylor loved trains and Christmas more than anybody else.

While most of us built model railroads in our house, Bill built his around his house!
We might spend a few hundred dollars at the most for a quality locomotive. Bill's locomotives cost as much as a new car! At Christmas, most of us manage to string a few lights outside of our houses. Bill strung up over a hundred thousand lights, putting Chevy Chase's achievement in "National Lampoon's Christmas Vacation" to shame! While most of us would invite a few friend and family members over for the holidays, Bill invited the whole city of Winnipeg over to celebrate Christmas with the Taylors, and it was a month long event!

Sadly, Bill passed away this summer. His place is dark for the first time in over 15 years.
No trains will run at the Taylors this Christmas.

But wait! There's hope for the future!

Winnipeg Model Railroad Club Vice President Dave Downie has contacted Assiniboine Valley Railway President Len LaRue about the possibility of the WMRC pitching in to help put up the lights in 2014. But first, matters of Bill's estate have to be settled.  After that, a whole news system of lights has to be re-designed. Bill's light system design as his and his alone, and when he died all the information about it died with him.

So we have to start all over again. It's almost like when Chevy Chase handed young Johnny Galecki (who now plays Leonard in "The Big Bang Theory") that ball of Christmas lights in "National Lampoon's Vacation".  But it can be done, and we can do it if we all pitch in!

Kudos to Dave Downie for contacting the AVR! In the past few years we've reached out to the Winnipeg Railway Museum and set up the Gateway Western in it's own structure inside the museum. We also reached out to the organizers of the Manitoba Mega Train Show and partnered with them to put on the most successful train show the province has ever seen!

If the model railroad and rail fanning communities of Winnipeg are going to survive, we need to all work together, and that's what our club is doing!
Posted by Paul Ullrich, WMRC Blog Editor at 1:01 PM