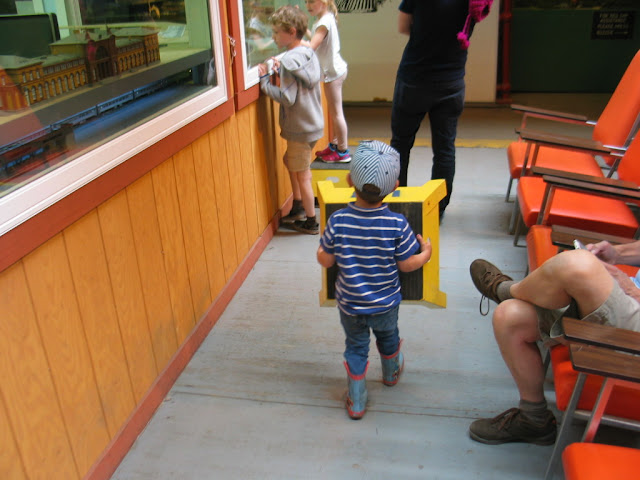 There was no stopping this little tyke from seeing the trains at the Gateway Western Railway!

The Winnipeg Railway Museum had a very good turnout during Doors Open Winnipeg this past weekend.  Dedicated WMRC volunteers ran the Gateway Western Railway while WMRC Program Director Dave Downie operated the club's John Allen Timesaver modular switch yard.
The Timesaver's power pack burnt out on Saturday, but Gateway Western Superintendent Gino Kost supplied another power pack that carried it through the weekend. Much appreciated, Gino!
Many of the kids did a great job running the Timesaver (both boys and girls). The club printed out completion certificates which were to be given to the kids for successfully operating the Timesaver layout. Unfortunately, most of the kids weren't interested in them, and neither were their parents.

Dave spoke to many people who expressed an interest in the WMRC and The Manitoba Mega Train Show and many brochures were handed out for both. The Winnipeg Railway Museum did a great job supplying a table and an electrical hookup. Thanks to everyone who helped out!