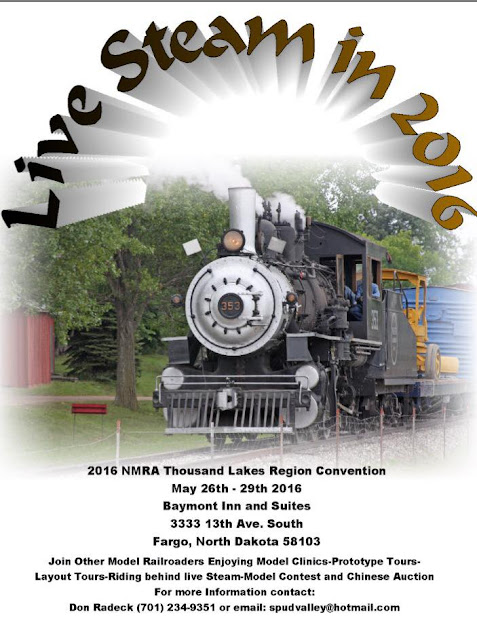 All aboard for Fargo, North Dakota for the NMRA Thousand Lakes Region's 2016 convention! We're hoping a lot of WMRC and No. 1Northern Division members will make the trip this year, as it's only 223 miles away from Winnipeg. That's practically in our back yard! If you can make it to West Acres, then you can make it to the Baymont Inn in Fargo where the convention's being held!

The theme of this year's convention is "Live Steam in 2016". And there will be plenty of steam, as we're heading out to Rollag on Saturday, where the Western Minnesota Steam Thresher's Reunion is held! The Friday dessert reception is being held at Bonanzaville USA, Fargo's premeire historic tourist attraction, where you can fest your eyes on their 130 year old 4-4-0 steamer that they have on display!

There will also be plenty of prototype tours and layout hops, along with the popular model and photo contests. There will be a guest speaker at the banquet, followed by the Chinese auction hosted by the ever popular "B+ Team" of Jay Manning, Paul Ullrich and Paul Gerry! They used to be called the "B" team, but they were upgraded from "B" due to their stellar performance at last year's convention in Thunder Bay.

The fun starts on Thursday evening, May 26 and goes on until Sunday, May 29. Hope to see you all there! For additional information on the convention, and to get a downloadable registration form, go to the TLR website by clicking here.
Posted by Paul Ullrich, WMRC Blog Editor at 11:22 AM