Is this the world's smalest model car? 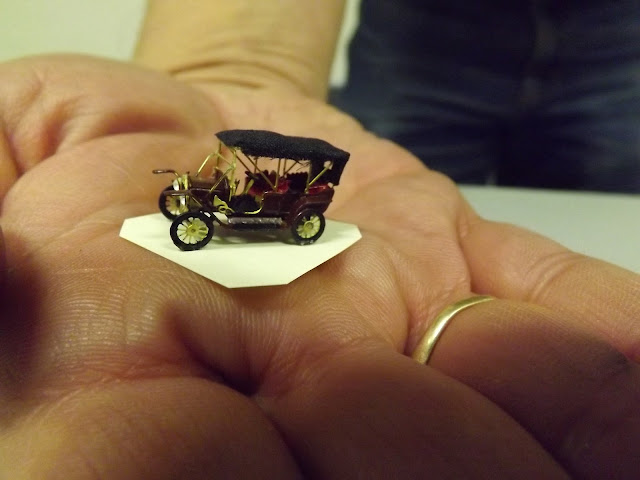 The WMRC's monthly model display always has a lot of surprises,  but everyone was blown away by long time member Richard Mikolayenko's remarkable crafting of a brass model of a Micron Art N scale 1911-1915 touring car! Richard likes to model not only in N scale, but Z scale as well. It makes you wonder if he's recruiting Ant-Man to help him model, but apparently he does it all by himself!

The car body was folded in to shape with two pairs of fine needle nose pliers. He was careful not to exceed the recommended fold distance, for brass is unforgiving when it comes to compensating for bending too far. He removed several of the detail parts for painting prior to installing them where they belonged.

That the details were spray painted the appropriate colours. He chose a cherry red for the car body then proceeded to follow the rest of the assembly instructions.  The upholstery was coloured a bright red as it was a typical option for the model year. The tires were hand painted a flat black as were the running boards and the steering wheel. The cloth roof was attached with C.A.  His last task was to glue on the crystal headlamps.

The model almost 14 hours to complete. Kudos to Richard for such an excellent and painstaking modelling job!

Posted by Paul Ullrich, WMRC Blog Editor at 8:06 AM