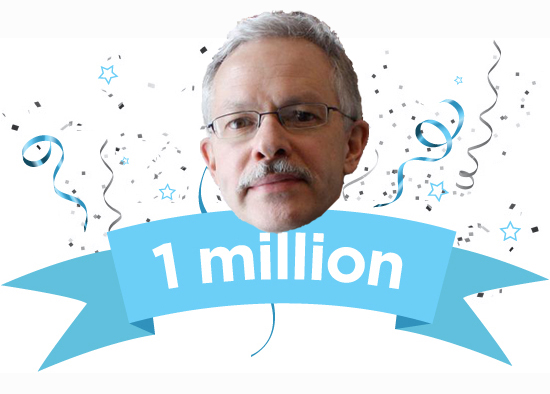 Congratulations to long time WMRC member John Longhurst for making his first million! No, he didn't win the 649 or Powerball. His popular model railroading blog, The Manitoba and Minnesota Subdivision, has reached one million views!

John has been a club member for over 20 years. He was the Associate Editor for Canadian Railway Modeller for many years, and he was also the WMRC's publicity director. In 1997, he and his brother-in-law the late Ken Epp took over the responsibilities of running the Winnipeg Railway Fair from Morgan Turney and Peter Lacey. In 1998, they moved the location to the Mennonite Brethren Collegiate Institute and renamed it the Great Canadian Train Show, which ran until 2012.

John organized the 2005 Golden Rails convention in Winnipeg for the Canadian Association of Railway Modellers.  Kudos to John for reaching this remarkable milepost! Check out his blog at: http://cprailmmsub.blogspot.ca/
Posted by Paul Ullrich, WMRC Blog Editor at 7:49 AM