The CP holiday train is coming to town! 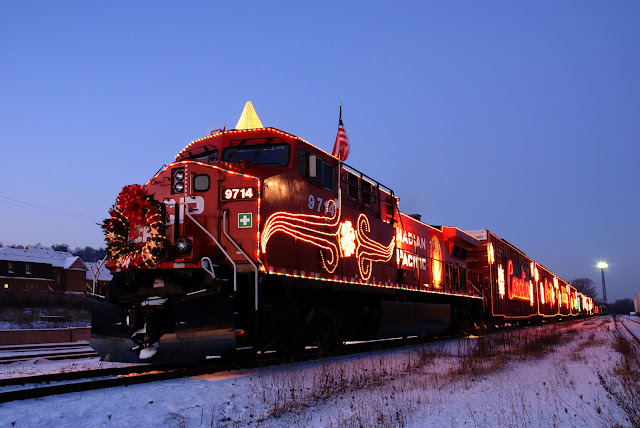 It's that time of the year again! The CP holiday train will be rolling into Winnipeg on Friday, December 4, arriving at Molson Street between Panet Road and Munroe Avenue at 9:00 PM. Showtime is from 9:15 to 9:45, and the featured performers this year are Devin Cuddy and Kelly Prescott.

Kelly Prescott is no stranger to Holiday Train. She has taken part in numerous U.S. tours and was featured on many of the past Holiday Train CD's, including the gold record release in 2005. In 2013 she shared the stage with Sheryl Crow and Take Six on the Holiday Train 15th anniversary show in Minnesota.​​​ Devin Cuddy is the son of one of Canada's most beloved singer/songwriters, Blue Rodeo's Jim Cuddy, country rock has been the soundtrack to Devin's entire life.

The train will also make stops at Portage la Prairie on December 5 opposite the Centennial Arena on 390-1st St. NW at 1:15 PM. It then arrives at Minnedosa at 5:00 PM west of the station on the north side of the yard, 30 2nd Ave, NW. It makes its last stop in Manitoba at Shoal Lake by the gravel lot adjacent to grain elevator on North Railway Avenue at 8:15 PM.
Posted by Paul Ullrich, WMRC Blog Editor at 7:37 AM