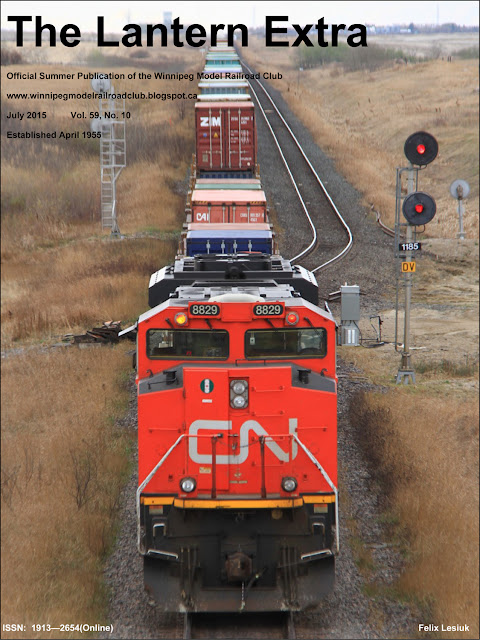 Felix Lesiuk contributed this image of CN freight 8829, an SD70M-2 hauling a container freight, for the cover of The Lantern Extra, a special summer edition of the WMRC's official publication.

Two themes have been announced for the WMRC's photo contests in The Lantern Extra, a special summer publication of the club's official newsletter.

For the special event for the club's annual photo contest, WMRC photo contest chair Suzanne Lemon has announced that the theme will be "The sky's the limit". Even the immense size of a train can be dwarfed by the sky and seemingly endless landscape around it. Show us your best shot of a train or other railway-related subject with a big sky around it!

It could be a beautiful summer day, with a perfectly clear blue sky, or even one with a few puffy white clouds. It could also be a dark and ominous stormy sky, or a beautiful evening sunset. The possibilities are endless and the summer is the perfect time to capture images like these, so get out there and give it your best shot!

For The Lantern's photo contest, the theme for the September issue will be "green" (the interpretation of this theme is entirely up to you). The winning entry will have their image published on the cover of the September issue of The Lantern. Submissions are to be sent to Lantern Editor Robert Weaver no later then midnight Tuesday, September 2. You must supply a caption, and if possible, note the camera settings.