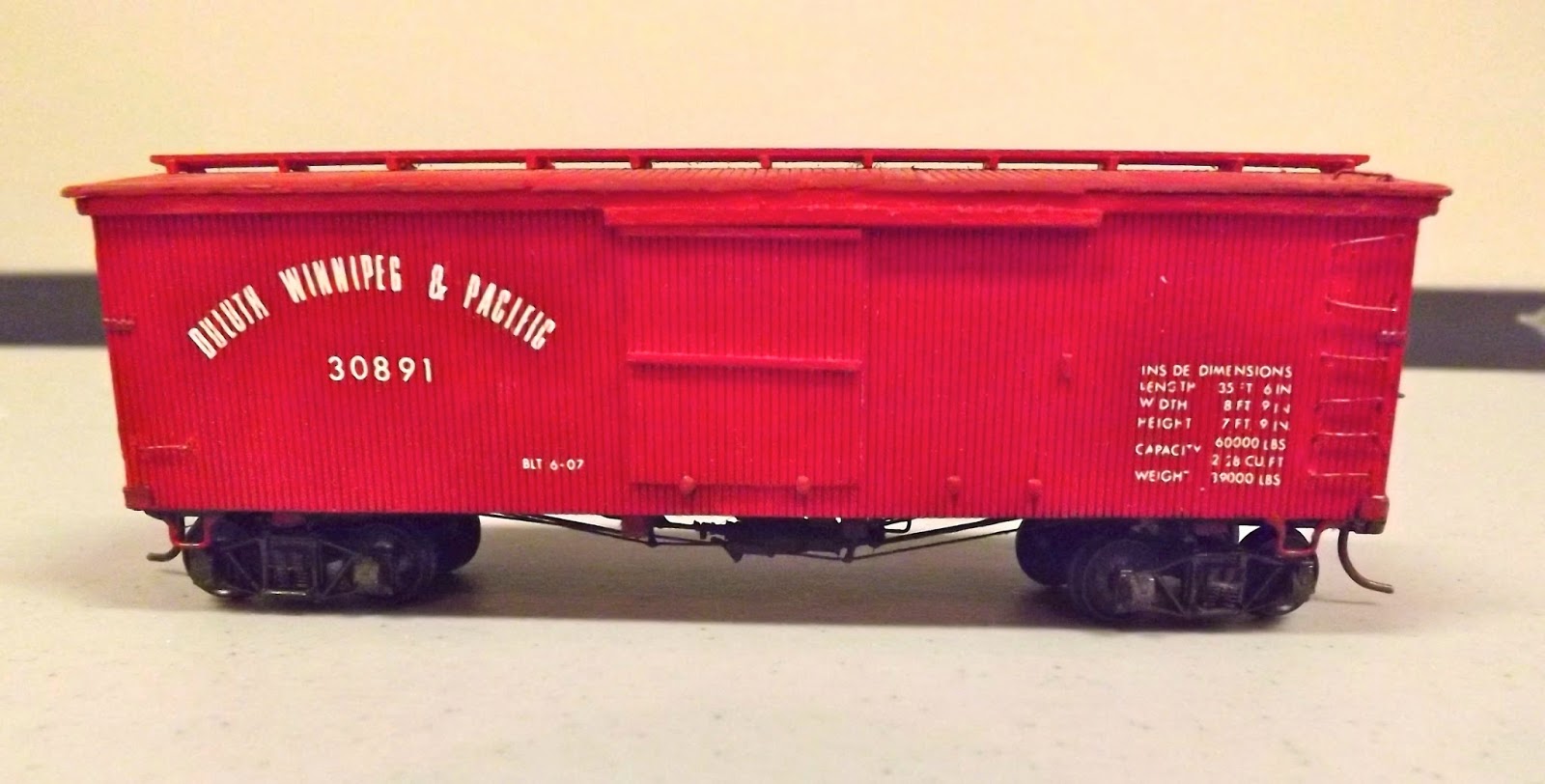 For our October model display, WMRC President Larry Leavens entered the very first Craftsmen kit that he assembled way back in 1976 when he was a novice twenty something modeller.  His notes on building it were so amusing that they're definitely worth repeating on this post. When you're reading this, keep in mind that we've all been there (including mistaking actual red for boxcar red).

The other week I had a conversation with a friend about the first train model that I built. It was in the summer of 1976 while I was living in the Kettle Construction Camp just outside Gillam, Manitoba. On one return trip to Winnipeg I dropped by Gooch’s on Portage Ave. and purchased a Duluth, Winnipeg & Pacific boxcar. The word Winnipeg in its name was probably the reason I bought the car. At his point in time my modelling skills were limited to building a few plastic airplane models while I was a kid. I had much to learn. Once back in Gilliam I examined the box’s contents to find a bunch of wood and many pages of instructions. It started off by congratulating my on buying this wonderful CRAFTS-MEN kit, whatever that meant.

The first instruction was to cut the wood to length. Oh my, I need TOOLS! Into the shaving kit to find a double edged razor blade to cut the strip wood. Glue pieces together? This I did right and purchased some white glue from a hardware store in Gillam. Things progressed along until I had to mount the grab irons and other metal parts. Drill with a # 72 drill bit. What is that? I was able to find a 1/16” drill bit in the Gillam hardware store, but that was the smallest that they had, (but that was still way too large). I ended up using a darning needle to poke holes in the wood to mount the grab irons.

Once all of the wood and parts were assembled, it recommended using boxcar red to paint the car, whatever that colour was. The hardware store back in town had a small selection of spray paint including – RED. I want to paint a boxcar red so this must be the correct colour. I painted the car outside the bunkhouse one night and then placed the model in my room to dry. It did not take long before the little room smelled like I had painted the car in there.

The dry transfers are still attached to the model so I must have done that right. It will never be a contest model but it was the first railroad kit that I built – craftsmen, whatever that meant.
Posted by Paul Ullrich, WMRC Blog Editor at 11:47 AM