The Winnipeg Model Railroad Club's monthly model display is held at every meeting by the No. 1 Northern Division of the NMRA. To qualify for the monthly prize, you must show that you've done some assembly or weathering. Each entry must include a short write-up describing the work that has been finished to date.

This month, Ron Einarson submitted a very unique model, which he freelanced out of several pieces from his modeller's "junk box", and describes how he created it. 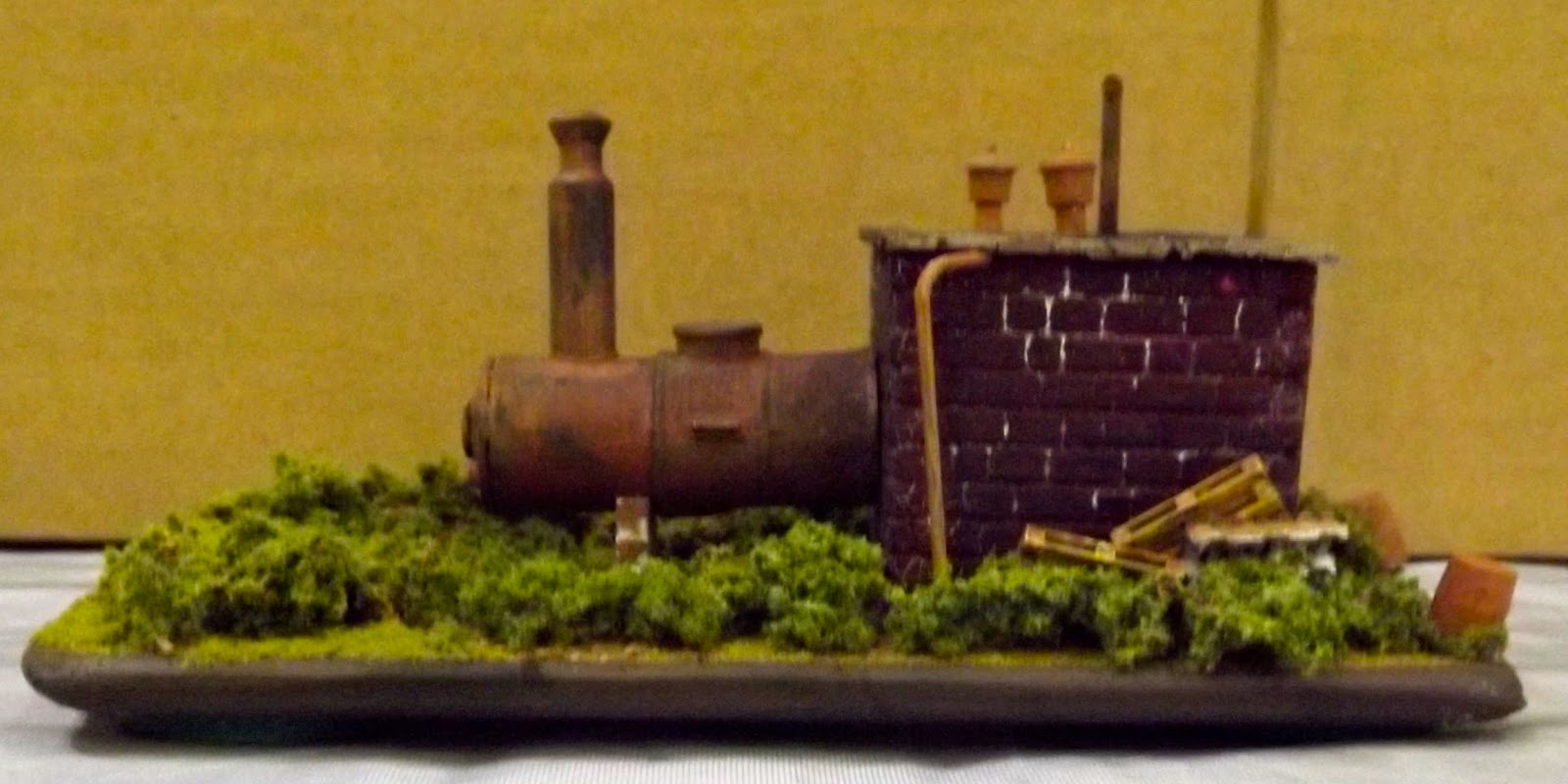 I came across this cast boiler one day when I was rummaging through an old box of bits a pieces I have where all the remnants and left over parts go or if someone gives me a box of their old goodies. I never throw anything out…just ask my wife!

This casting was perfect for an area I have on the south extension of my layout. The extension is 6” x 6' and bolts on the right side of my layout. It is a rural area with an L&N maintenance shed, grade crossing and a field with grazing cattle plus a wooded area with a still.

I applied a coat of Accuflex Dark Rust paint (note: Accuflex paint is no longer commercially available) as a base to the boiler as well as the short retaining wall that holds it up. Once it dried (read that as several months ago) I took out my daughter Louise’s old water colour set and applied a half dozen coats of various browns, reds, oranges and yellow combinations to give it a well weathered look just like it had been dumped in the woods and deteriorated over several years or more. I streaked on the paint using both a cut off brush as well as a very flexible long bristled brush. This gave it a very well worn rusted appearance. Once I was satisfied with the appearance I gave it a dusting of dry pastel and chalk dust.

The next step was to locate a suitable chimney as the parts box did not have one. It was probably in parts box #239 and I have only search through 1 to 76 so far! But I did find a suitable replacement. It wasn't a big flared unit like the old time steamers but a plastic pipe that would fit and resemble a unit that had replaced the original. I painted it up as I had done on the boiler, glued in on and it looked like the perfect match. A little more dusting of dry pastel and chalk dust and it was ready to find a spot.

As the boiler sat on my drying shelf I kept thinking I should add more detail to it (read that as I could use some more parts from the remnant boxes). I came across a box of old plaster casts I had made from some moulds the WMRC President Larry Leavens had loaned me. They were for a "Dungeons & Dragons" type of game where you could make your own castles. I had made some copies of the walls and have used parts and pieces over the years. Now I thought would be a good time to build a brick attachment to the boiler, sort of a mechanical room. I picked out four pieces and glued them in a square and painted them a dark brick red. Once it dried put on a white chalk dust for the mortar. Next I added a Grandt Line door, roof vents, pole with light, and several plastic rod pipes running out of the shed - to where I don’t know, but it seemed like a good idea and looked great when it was done. A few castings thrown around outside added more to the scene.

The last step involved adding some scenery. I glued the boiler and shed to a small first aid splinter I had in the garage and gave it a coat on brown paint. Then I sprinkled on various types of ground foam and bits of foliage. The next day I applied a wash of diluted glue over the scenery to really affix it to the diorama. A few extra junk pieces were also added to give a clutter look to the scene.

Now I just have to add it to the module when I bring it in from the garage in the spring. Right now it is buried in the back of a pile of stuff and it is too cold to move everything, especially when the main garage door would have to be wide open. Later in the spring will see this project finish up.

Posted by Paul Ullrich, WMRC Blog Editor at 8:10 AM