Our good friend Joe Krolik of Comics America had been a staunch supporter of the Winnipeg Model Railroad Club for several years, including the 2013 Manitoba Mega Train Show. Whenever we've had a show he's always put a poster up in his shop and stuffed flyers we've given him in the bags of his regular customers.  He's always made every effort to attend our shows whenever possible.

Joe has caught the train bug. But he's not building a layout.

Yes, that's right! In his store, among all of those wonderful comics, are three Lionel Train sets! Right from the 2013 Lionel Christmas catalog are the Polar Express and the Peanuts Christmas set. He's also carrying the Harry Potter Hogwarts Express set. All sets have locomotives with smoke and whistle, transformers and an oval of track.

Considering that Winnipeg has just lost Elmwood Hobbies, and hobby shops are vanishing throughout the land, it's mighty encouraging to find someone new whose willing to sell train sets! Let's hear it for Joe!

Comics America is located at 552 Academy Road in Winnipeg. Call 204-489-0580, email comics_america@mts.net, or like Comics America on Facebook! 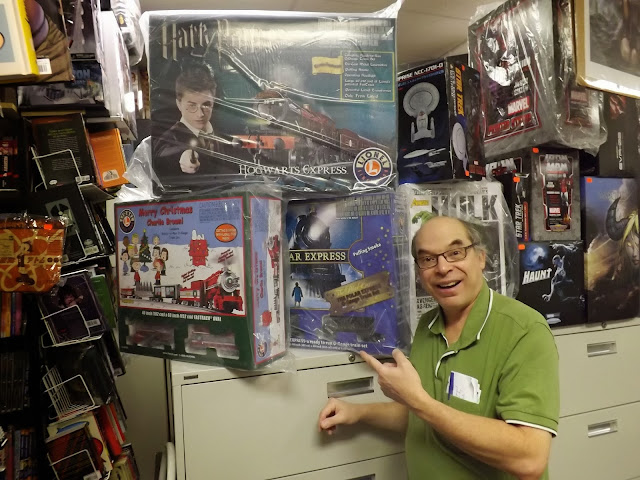