Some of you might've noticed that we now have an image from a model railroad on our site's masthead.  We surely needed a visual presence there. After all, this is a blog about the Winnipeg Model Railroad Club!

When it came to selecting an image, the choice was obvious - it had to be from Stafford Swain's layout!
Stafford was a true model railroading pioneer. His layout of the CNR Whiteshell Division was a museum quality creation of the real thing. He started building his layout in 1975, when prototype modelling was a rarity, and scenery techniques were pretty basic.

He's had over 80 articles published in magazines such as Model Railroader, Mainline Modeller and Railroad Model Craftsman. He's MMR #98. He helped found the CN Lines SIG (now the Canadian National Railway Historical Association), was president of the Winnipeg Model Railroad Club and the TLR, and was the Convention Director for the 1983 NMRA national convention held in Winnipeg.

Sadly, his layout is no more. The layout was dismantled shortly after it's last public showing in 2010 for the TLR's Steam on the Prairies convention in Winnipeg. A glowing tribute to Stafford and his many accomplishments has been published in Canadian railway Modeller, Train 17, Track 3. Besides this site, you can also read about Stafford at WMRC member John Longhurst's Manitoba and Minnesota Subdivision blog at http://cprailmmsub.blogspot.com/

This site will continue to post further images of Stafford's layout in the future. 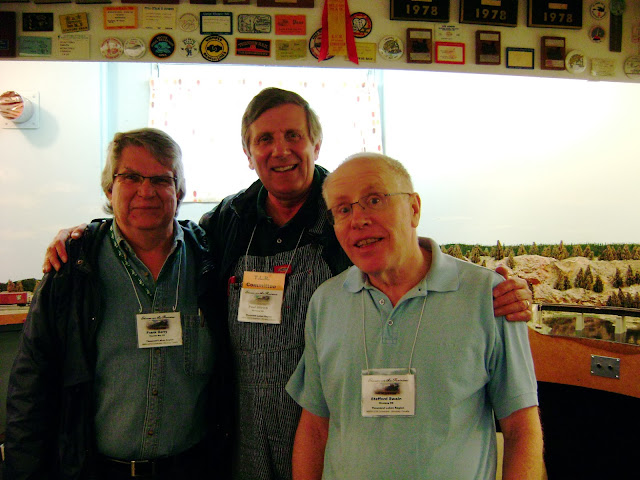 Left to right: Former NMRA Canada President Frank Gerry, 2010 TLR Convention Director and WMRC blog editor Paul Ullrich, and Stafford Swain, MMR at the last public showing of his CNR Whiteshell Subdivision layout at the Steam on the Prairies convention in 2010.
Posted by Paul Ullrich, WMRC Blog Editor at 9:46 AM