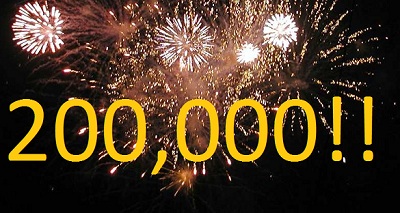 The WMRC blog passed the 200,000 viewers mark a few days ago. When this blog was started just a little under five years ago we never would've believed that we'd reach so many views this soon! That's an average of 40,000 views per year! That's just a fraction under 110 views a day!

We have 585 posts archived, which anyone can view. We've garnered a worldwide audience! Who would've ever imagined that a blog from a model railroad club in the middle of Canada would have readers from Russia, Ukraine, France, Germany and China? Here's a breakdown of the top 10 countries where we're viewed, and the number of views per country:


Thanks to all of our readers, club members, model railroaders and rail fans who have viewed this blog and have made it so successful!
Posted by Paul Ullrich, WMRC Blog Editor at 7:00 AM