Jack Carr, owner of Carr's Hobbies in Duluth, has passed away 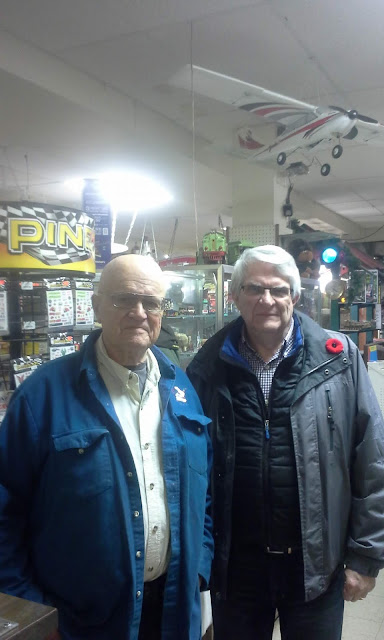 Jack Carr (left) is seen with Frank Gerry of Thunder Bay at Carr's Hobbies just before the store closed for good in the fall of 2019. Frank is a long time NMRA member and had been a customer of Carr's Hobbies for over 40 years. Photo by Paul Gerry.

Jack Carr, owner of Carr’s Hobbies in Duluth, Minnesota, has passed away at the age of 79. Carr’s Hobbies closed in October 2019. Nearly 500 lots of items were sold off at auction.

Carr’s hobbies was a Mecca for model railroaders for almost a half century. Model railroaders from Winnipeg and other Canadian locations within driving distance to Duluth made it a point to visit Carr’s whenever they were traveling in Minnesota. Carr estimated that 70% of his trade came from outside of the Duluth area.

His store was one of the most fully stocked hobby shop in the upper mid-west. Hundreds of items were stocked from floor to ceiling in the shop. The store was well known for its collection of antiques and railroad memorabilia that he kept in glass display cases, which gave the shop a museum quality. Rail fans who visited his store will always remember the impressive assortment of railroad lanterns that he had hanging from the ceiling.
Posted by Paul Ullrich, WMRC Blog Editor at 7:22 AM