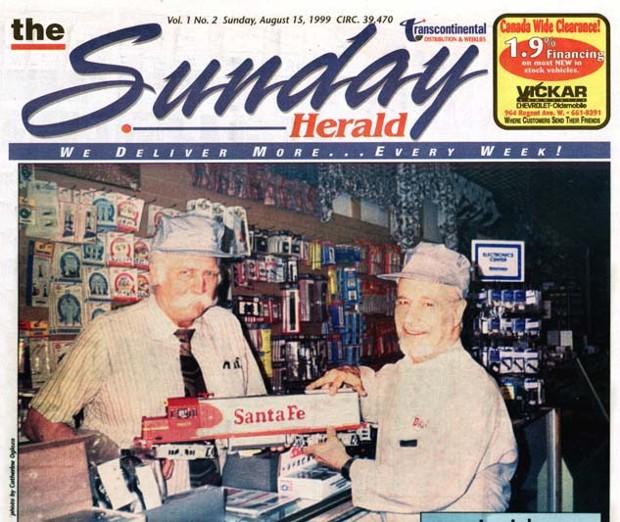 Vern Gibson (right) is pictured with his good friend Hilt Friesen in their store, Elmwood Hobby Works, on the cover of the Sunday Herald in 1999.

Long time WMRC member Vern Gibson passed away on Friday, July 16 at age 89, just short of his 90th birthday in August. He was a resident of Deer Lodge Centre during his final years.

Vern spent most of his working life at the Centennial Concert Hall. He will be fondly remembered by the model railroad community as the founder of Elmwood Hobby Works, which he started in a small section of his good friend Hilt Friesen’s furniture, window treatment and blind shop. Hilt became a co-partner and the shop expanded to take over the entire building.

Vern and Hilt built the business up, providing an excellent stock of model train equipment for all gauges along with great service. Their mail order business was well received by hobbyists across Western Canada. Vern eventually sold his half of the business to Hilt and devoted the rest of his time to his favourite hobby. He and his good friend Marvin Fetch built a spectacular layout in Marvin’s house, which has been featured in several model railroad publications and posts on-line.

Vern was a lifetime member of the NMRA, and he encouraged almost everyone who entered his shop to join. He kept membership forms in a desk drawer right by the cash register. He attended many regional and national conventions, the last one being the 2006 TLR convention held in St. Paul, Minnesota.

Posted by Paul Ullrich, WMRC Blog Editor at 10:47 AM