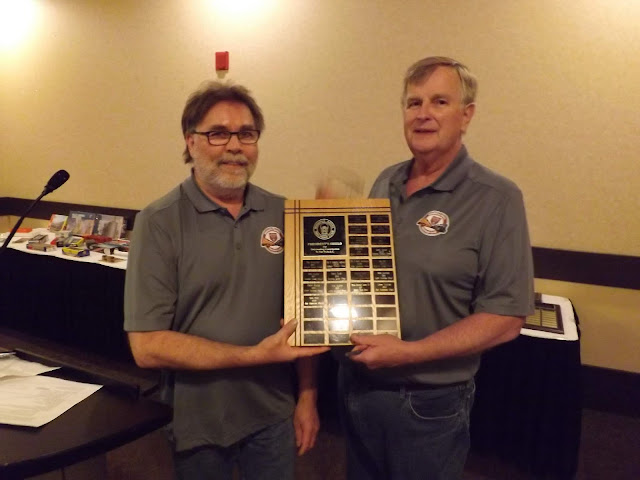 Gino Kost (Left) is presented with the WMRC's President's shield award from President Bob Harrison at the club's annual banquet held on May 10, 2019.

Gino Kost is the recipient of the WMRC's President's Shield Award for 2019. The award is given every year by the president to a member for their outstanding volunteer contributions to the club.
And Gino is certainly deserving of the award! He is currently the superintendent of the Gateway Western Railway, which is the club's HO gauge layout that is housed in the Winnipeg Railway Museum. The Gateway Western is the largest model railroad display in Winnipeg. It will be open to the public on May 25 and 25 during Doors Open Winnipeg.

Gino's greatest contribution to the club was supervising the construction of the structure that houses the Gateway Western Railway. Gino modified the plans of a prefabricated garage, ordered the lumber and had it shipped to the museum, and managed a small group of dedicated volunteers in its construction. The "house that Gino built" is truly the jewel in the crown of the club, and the WMRC will forever be grateful for all of Gino's hard work. Congratulations, Gino!
Posted by Paul Ullrich, WMRC Blog Editor at 7:00 AM