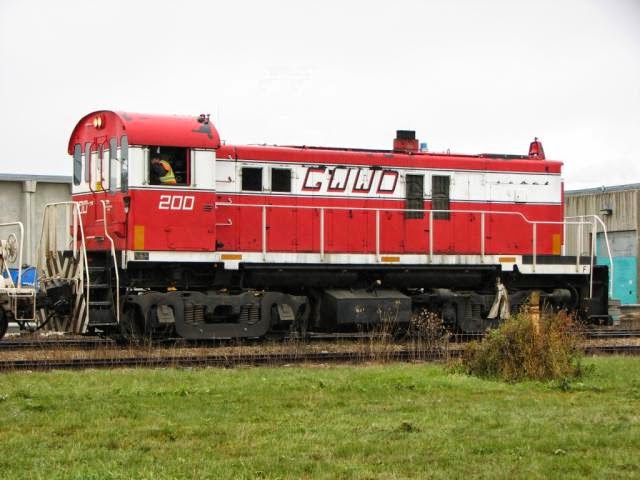 This image, taken by our good friend Steve Boyko for his blog, "Confessions of a Train Geek" shows the GWWD RS-23 switching tank cars outside their yard on Dawson Road in the rain. The switcher was built in 1960 by MLW and purchased by the GWWD in 1985 from Devco.

January's WMRC meeting features a special presentation about the Greater Winnipeg Water District Railway given by Mark Perry. The GWWD is a unique short line owned by the City Of Winnipeg. It is a 167 kilometer long line that runs from St. Boniface to Shoal Lake, which is the source of Winnipeg's water supply. It was built 100 years ago to assist in the construction of the aqueduct running from Shoal Lake to Winnipeg.

The railway has been the subject of a book by our good friend Peter Lacey of the Winnipeg Railway Museum. An article in Trains magazine was written about the railway by former WMRC member Jeff Keddy for their March 2013 issue.

Many of our members will fondly remember passenger service on the line, and the many excursion trains that ran on the weekends until 1982. They ran a special excursion train of the very last time in 1983 for the attendants of Railway Jamboree '83, the 1983 NMRA national convention that was held in Winnipeg.

The meeting is on Friday, January 9 at 7:30 at the Charleswood Legion at 6003 Roblin Boulevard.
Guests are always welcome!
Posted by Paul Ullrich, WMRC Blog Editor at 5:00 AM