The Demise of Carstens Publications: The inside story 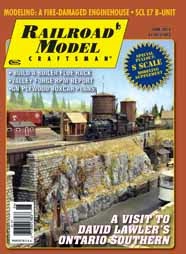 Will this be the last issue of RMC?

The following is a post written by Chris Lane, editor of Carstens Publication's On3 Annual:

Any business owner will tell you, it is all about cash flow. You may have all the sales you can handle, but if you don't get the money in the door in a timely and steady manner, you are going to have issues. And that has been the case at Carstens for some time. We have been on a "pay to play" deal with our printer for years…We'd send the mag and the money to print it…then we'd send the money for postage and they'd mail it. And these were not insignificant dollar amounts.

From 2008 on, as the recession kept going, people kept losing their jobs or taking work that paid less, our sales diminished also. We had increases in the book line, primarily due to the On30 and then the HOn3 Annuals, and our ad revenue stayed pretty steady. But over time, the cash coming in, and the frequency of it inched downward. Our costs (payroll, taxes, printing costs, mailing costs etc.) kept going up, and in the case of mailing, significantly so.

When Super Storm Sandy hit, we were out of power for 10 days (no phones, no computers) and we counted ourselves lucky compared to some on the east coast. But there was basically a half month that we could not generate any revenue, and of course many folks on the east coast couldn't buy from us if they wanted to because they didn't have power or were dealing with flooding issues. Then we had the polar vortex and the winter that would not end, and had many of the same issues. Those hurt our cash to the point where we were missing print windows because we didn't have enough cash to print, and we had to delay. That delay hurt subscriber confidence and you can see the death spiral picking up steam. There were any number of things that you could point to, but Quad Graphics (our printer in St. Cloud for the last 15-16 years) making the decision to shut the St. Cloud plant down and move us (and they let all the people we'd worked with go) and put us with a new plant and new people, that was basically the end. We had very little money coming in, and with the delay, small prospects of any coming in. We scrapped enough up to do the June and get it out, but the July will never see the light of day as a Carstens product.

Now two companies are bidding to buy RMC & Railfan, and so they will continue in the future in some form. What that looks like I don't know. The Annuals future is somewhat more vague. It is my hope and certainly my intent to continue to serve as the editor and bring those out, but that decision is mostly out of my hands at this point.

I don't want anyone to feel bad for me, I will be just fine and it was my pleasure to serve the model railroad community and especially the narrow gauge community as a member of Carstens. God willing, I will be able to continue to do so in some other form, but I likely won't know what that might look like for at least another week or so, and likely longer.

Another factor worth mentioning is that Carstens was very late in keeping up with the digital era. They had just recently started publishing their on-line edition. Their main competitor, Kalmbach Publications, has had on-line editions for some time, plus a whole slew of features on their website for subscribers only.

Carstens was a very small publisher, with few resources to keep up with all of the recent changes in printing and publishing. Their main sales venue, the local hobby shop, has been vanishing at a rapid pace. Compare the hobby magazines of today with those of a decade ago. They're a lot thinner. Their advertising base has all but dried up.

Perhaps Carstens magazines will survive in the hands of others, but they'll be facing a tough uphill climb.
Posted by Paul Ullrich, WMRC Blog Editor at 8:16 AM