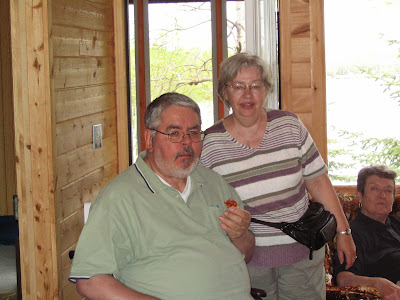 Nick is seen here in 2005 with his lovely wife Frances at a Thanksgiving supper at WMRC member Marcel Blair's cottage near Lac Du Bonnet. Photo by Morgan Turney.

The Legacy Centre (which was formerly the Norberry School Gym) was packed. Nick had many friends, not only from his ties with the model railroading community, but also from his long career as a teacher.

Nick's daughter gave an excellent power point presentation on the life and times of her father. She worked it from her iPad, which the tech-savvy Nick would've approved of. Several people, including long time WMRC and NMRA member Norm Leathers (who knew Nick since their University days) gave personal tributes and several amusing anecdotes about Nick.

Nick also worked behind the scenes for every club he joined. If you received a copy of The Lantern, CN Lines, or The Fusee through the mail, it was often Nick's own personal collection of stamps that brought the issue to your door. When Hilt Friesen and Bill Taylor were Presidents of the WMRC, Nick was the ghost writer for the President's message that appeared in every issue of The Lantern during their tenure.

Nick was also the club's "parliamentarian". He knew the club's constitution backwards and forwards, and he could answer any question and settle any dispute regarding it's rules and regulations.

When WMRC Webmaster Paul Ullrich was the Convention Director for the 2010 TLR Convention in Winnipeg, Nick came to his rescue by piggy backing that convention with the CNRHA convention, making it the best attended TLR convention in over a decade.

There were two Nicks - one was the hale and hearty, larger than life man with the big, booming voice. The other was the wheelchair bound man whose voice was reduced to a whisper. Those who knew him long enough loved and admired both of them. His debilitating ailment might've immobilized him, but it never slowed him down. Throughout his entire life, he never stopped volunteering, contributing, creating or giving.

Long time WMRC members will fondly recall when Nick was one of the auctioneers at the club's annual auction.  Whenever a box of junky snap-track was on the block, Nick always rose to the occasion and rallied the members with a stirring pitch for the forlorn track. Bellowing from the top of his lungs with a voice that could be heard clear as a bell from his home town of Middlebro, he'd shout, "Ladies and gentlemen, the rails of this track is not made of nickel silver, or tin, or copper, but GENUINE BRASS!"

It got to be such a familiar routine that several members of the club would say it along with him!