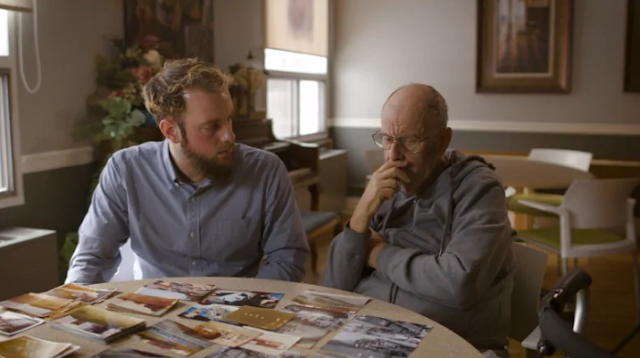 Karl Purchase (right) is seen here with his son Matt in a scene from a CBC news story that was broadcast nationally last April.

Former WMRC member Karl Purchase passed away on June 14, 2019. Karl was born in Corner Brook, Newfoundland served with the RCMP for 30 years in Manitoba. He will always be remembered in the model railroading community for his love for the Newfoundland Railway and his home town of Corner Brook, which he modeled with such astounding and painstaking accuracy.

The layout, with scenes that he made entirely from memory, fills two rooms and spans two different levels. It took him 20 years to complete it. Karl’s layout was featured prominently in Railroad Model Craftsman in 1983, prior to the NMRA national convention held in Winnipeg.

Karl was just featured in the national media in April of this year when his family used his layout to help reignite his failing memory Karl hadn’t seen his layout in over a year, and was living in a personal care home after breaking two hips. You can access this story by going to:
https://www.cbc.ca/radio/nowornever/for-this-newfoundlander-a-trip-down-memory-lane-in-a-model-train-1.5084309