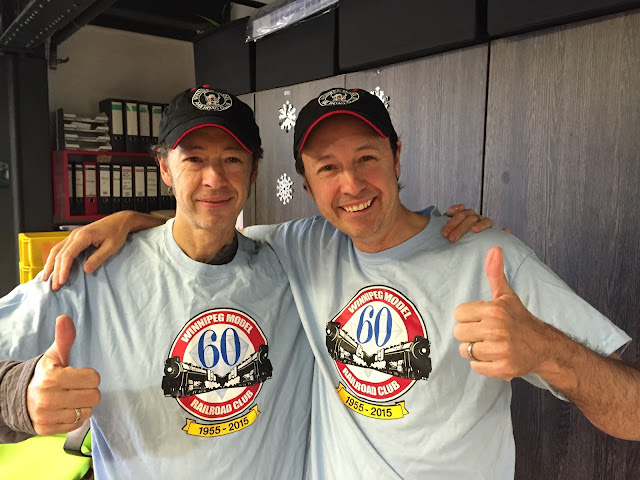 Thanks to WMRC Vice President Dave Downie, the club got a big "thumbs up" from the creators of Hamburg's Miniatur Wunderland. Yes, those are indeed Frederik and Gerrit Braun, wearing the club's 60th anniversary shirts, which were designed by WMRC blog editor Paul Ullrich. Dave Downie was in Hamburg recently, and when he visited Miniatur Wunderland, he brought the anniversary t-shirts with him!

"I took to Hamburg the shirts, hats and a letter that WMRC President Larry Leavens and I both signed." Said Dave.  "In the letter we introduced the WMRC and indicated that we were celebrating our 60th birthday. I said that the shirts and hats were a token of appreciation from the WMRC to Wunderland. It was suggested in the letter that we'd appreciate a picture of the Braun brothers suitably attired. We also mentioned the blog in the letter because I really feel that it gives us instant credibility."

"When I arrived, I asked if either of the brothers was available but was told that neither was expected in the building that day. Other senior management was not available. There was another event going on outside of the building. The person that I talked to saw the items and I had him read the letter. He assured me that he'd give the package to the Brauns the next day."

On December 1, Dave recieved this email message from Frederik Braun:

"Hello from Hamburg and thanks for your kind letter. Sorry for the late reply! Congratulations to the Winnipeg Model Railroad Club for the 60th anniversary! Please find the photo of Gerrit and me!"


Posted by Paul Ullrich, WMRC Blog Editor at 8:00 AM