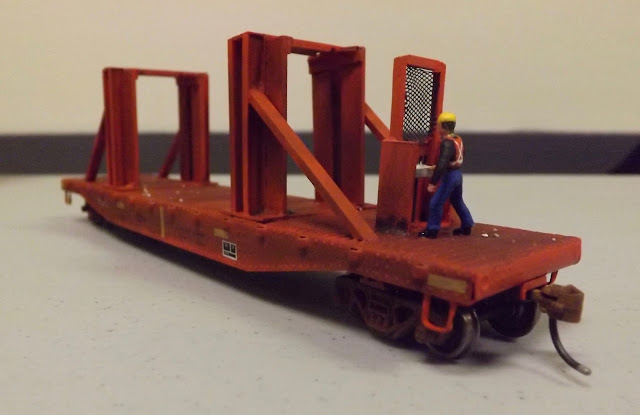 An interesting entry in the WMRC's monthly model display was Arron Woloshyn's model of a MOW car, complete with an operator! It's the first of many cars that will eventually become and entire MOW train.

This was usually the second or last car on a continuous welded rail (CWR) train. The operator controls risers in the posts that help guide the ribbons of the rails off the cars that holds them onto another car that feeds them through funnel shaped rollers that drop them onto the side of the tracks.

The model started out as an ordinary flatcar. The posts and control panel were scratch built from styrene. After it was painted CN orange, decals from various sets were applied. Aaron covered the surface with ballast, as ever year on the prototype has a fairly large amount on the deck for the many miles of rail that slide over the car every time it's used.

The "'operator" was once either a mailman or a policeman. Aaron painted his shirt and feet black, painted an orange vest with stripes. To create the hard hat, he simply dipped his head in yellow paint!

Our monthly model display is open to anyone who wishes to display whatever they've been working on. It is not a contest, but the names of the modellers are collected and one is picked at random to receive a gift certificate from a local hobby shop.

To qualify for the prize, you model must show signs of assembly and weathering. Each entry must include your name and a short write-up describing the work that has been accomplished to date. Only one entry per person, please!