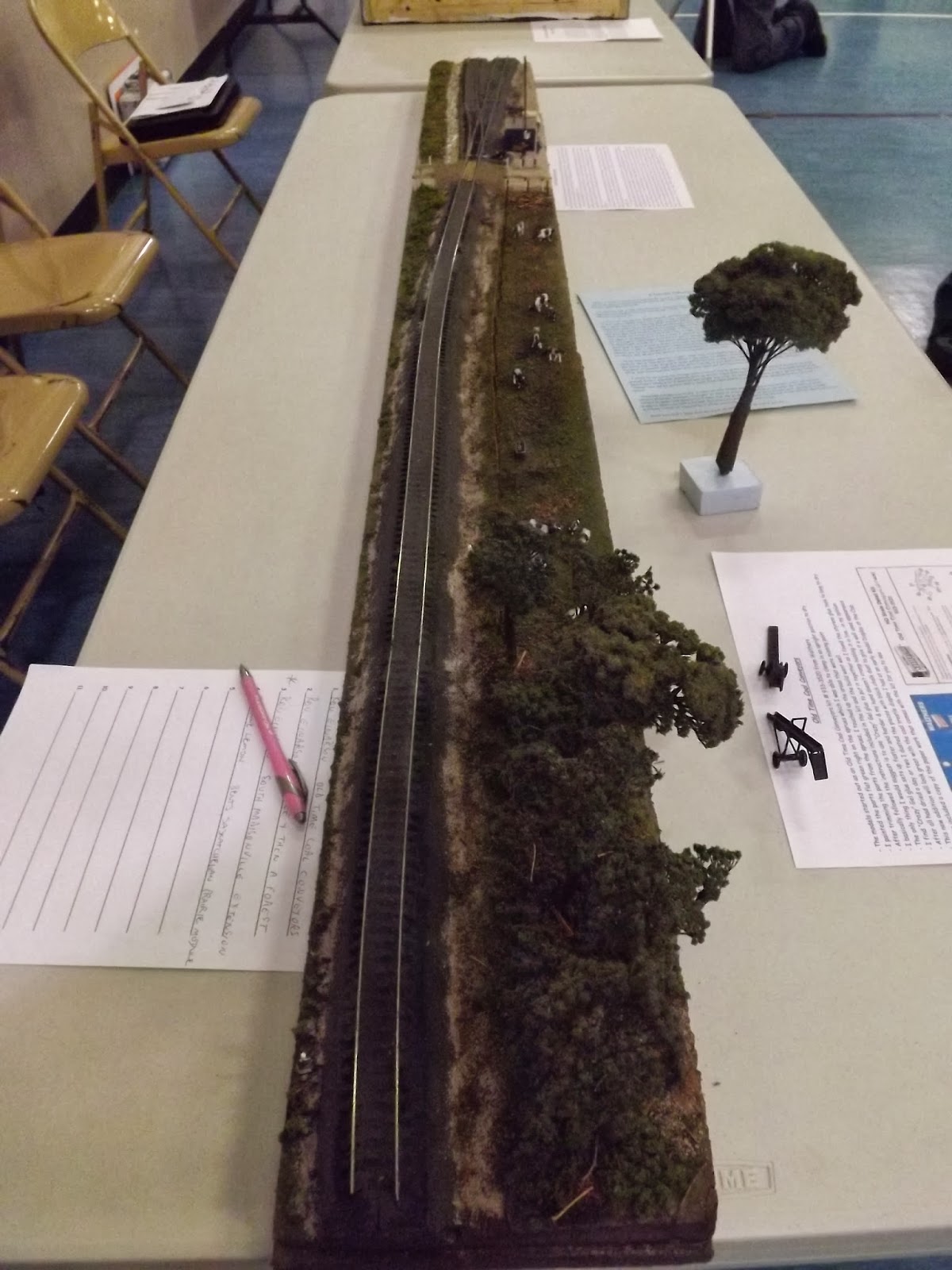 This month Ron Einarson submitted the South Madisonville Extension, which is by far the longest entry the monthly model display has ever had! It took up the entire length of a six foot long banquet table! Ron had three out of the four entries in this month's display. With odds like that on his side, it's no surprise that he won the hobby shop gift certificate! Ron has been enjoying himself immensely since he retired last year. Outside of modelling full tilt, he has just become a grandfather for the first time, and he'll become a grandfather for the second time later this year!

The South Madisonville Extension was built exactly as the prototype around the 1950's & 60’s, following construction methods at the time and with all the associated equipment and transitions from Madisonville to points south.  The display is typical of those along the L&N lines built during that period.  The display was built with the idea that it was getting towards the time when repairs & painting might be in need.

I started with a 1'x8' pine board and added track, scenery and a line side MOW facility. I added a turnout that connects the mains through town with the single track southbound. The area is set as a rural area with pastures for cattle and some scrub brush land paralleling the right of way. I used a piece of 1'x8' lumber six feet long for this section with a 1'' piece of Styrofoam glued on top that I painted brown. Next I laid the Atlas flex track and one #6 Atlas turnout on top of cork roadbed. I carved out ditches using a cordless Dremel tool, various files and knives. All this was done outside with my Shop Vac handy. I touched up the exposed Styrofoam with brown paint.

Next came some ballast and ground foam glued down with diluted white glue. I used coarse foam and foam clusters to add a rough look to some of the area. On the right side I fenced off an area for cattle, using bamboo skewers stained with my steel wool stain and cut them to size. Next I strung the nylon thread along the fence using fine fishing line, which I stained by dragging a cloth soaked in Polly-S Rust along the line. I added the cattle, an old bathtub with resin water in it for watering the cattle, trees, some junk parts & pieces plus a still.
At the turnout I added a shed, vehicle, motorcycle (custom built & painted), Acetylene tanks (hand painted) and a parking area with gravel and added lots of junk parts details and a MOW crew. Telephone poles (bamboo skewers made with RIX cross arms) were added along the right of way as well as trees and bushes. Also added was a gravel country road with a wood board crossing.

I'll be adding a backdrop created using personal photos I stitched together on the computer to create the 6 foot long rural mural.  I printed it on a colour plotter. I'm going to mount it on a 1' x 6' piece of Masonite and paint it sky blue. Lastly, I added some junk parts and pieces around the area to give it more of a lived in look. Besides the fenced cattle area, I added a forest area with scratchbuilt trees from Spirea & Sedum bushes, dirt from the garden covered with various textures of ground foam (both homemade as well as commercial). I added lots of underbrush details with broken twigs and piles of rocks, etc. to add depth to the area, plus a moonshine still that I built from an old cast metal kit. I crushed up some fine shale I had found along the road at the lake, sprinkled it in one of the ditches to add support to roadbed. I then took some Poge material my daughter Louise had during her younger days and applied about 10 coats to give an appearance of water in the ditch.

Posted by Paul Ullrich, WMRC Blog Editor at 10:47 AM