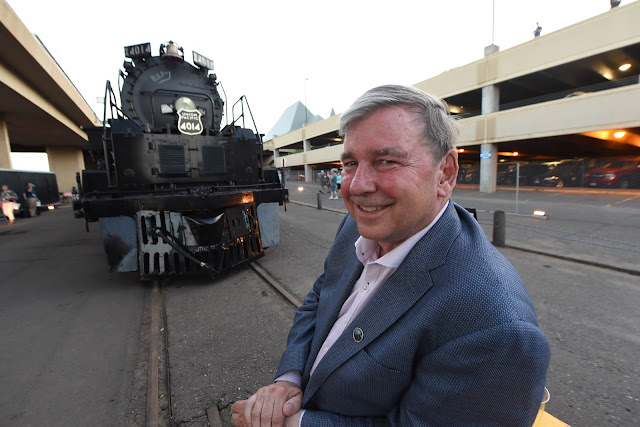 Ken Beuhler, Executive Director of the Lake Superior Railroad Museum, is seen in front of Union       Pacific's Big Boy, which made a stop in Duluth at the museum in 2019.

The WMRC having a night at the museum! Ken Beuhler, Executive Director of the Lake Superior Railroad Museum is going to conduct a tour of  this spectacular museum just for us! The museum was founded in the late 1960s and gained traction with the preservation of the Northern Pacific's Union Depot in downtown Duluth by the Museum's founders. They saved the building and created an Arts Culture and History Center. It made the front cover of TIME magazine when it opened. USA Today voted the Museum the "Best Transportation Museum in America." The museum has become one of the major tourist attractions in the Duluth Superior Region. In 2019, it hosted the Union Pacific’s “Big Boy”, which attracted 12,000 rail fans.

Dave MacLean, long time member and past president of the Model Railroad Club of Toronto, will showcase his club, one of the oldest in North America. Having forced to move in 2013 from its former 67 year run in a former WW2 era munitions factory, the Club is now in its fourth home. Since 2013, Club members have been building a new 3500 square foot layout featuring multiple deck construction, mushroom design concepts, soaring bridges over aisles, and walk in design to all areas. The Club  embraces traditional and new technology such as DCC/JMRI/WiThrottle to allow use of handheld devices for control of trains and turnouts. Recently 3D printing has been adopted. The layout features a mainline length of over 8 scale miles with full staging yards, with two major terminals to allow transition era Canadian railroad operations, with walk-along timetable passenger and waybill freight operations. The layout is fully signaled according to the 1960 Canadian Railway Operating Rules with full dispatcher functionality.

The meeting takes place on Friday, January 14 at 7:00 PM. Due to COVID concerns, this will be an on-line only meeting on Zoom. We will be holding our member’s monthly model display. All members have received a Zoom link for this meeting. If you are not a member and wish to receive a link, email us at wmrc.train club@gmail.com and we will send you a link.

An O scale CP passenger rounds the corner at the Model Railroad Club of Toronto's layout.

Next meeting: Friday, February at 7:00PM

Due to the current COVID situation we do not know if we will be holding an in-person meeting at present. Please note that the time of the meeting has been permanently changed from 7:30 to 7:00. Regardless of whether we chose to hold a virtual meeting only or an in-person meeting, the meeting will still be conducted on Zoom, all members will still receive a Zoom link. If you are not a member and wish to attend, please email us at wmrc.trainclub@gmail.com and we will send you a link.